Moysey Bondarenko, 23, who is serving in the Armed Forces of Ukraine, lifts his comrades' spirits by playing the violin.
By James King May 19, 2022
Facebook
Twitter
Linkedin
Email 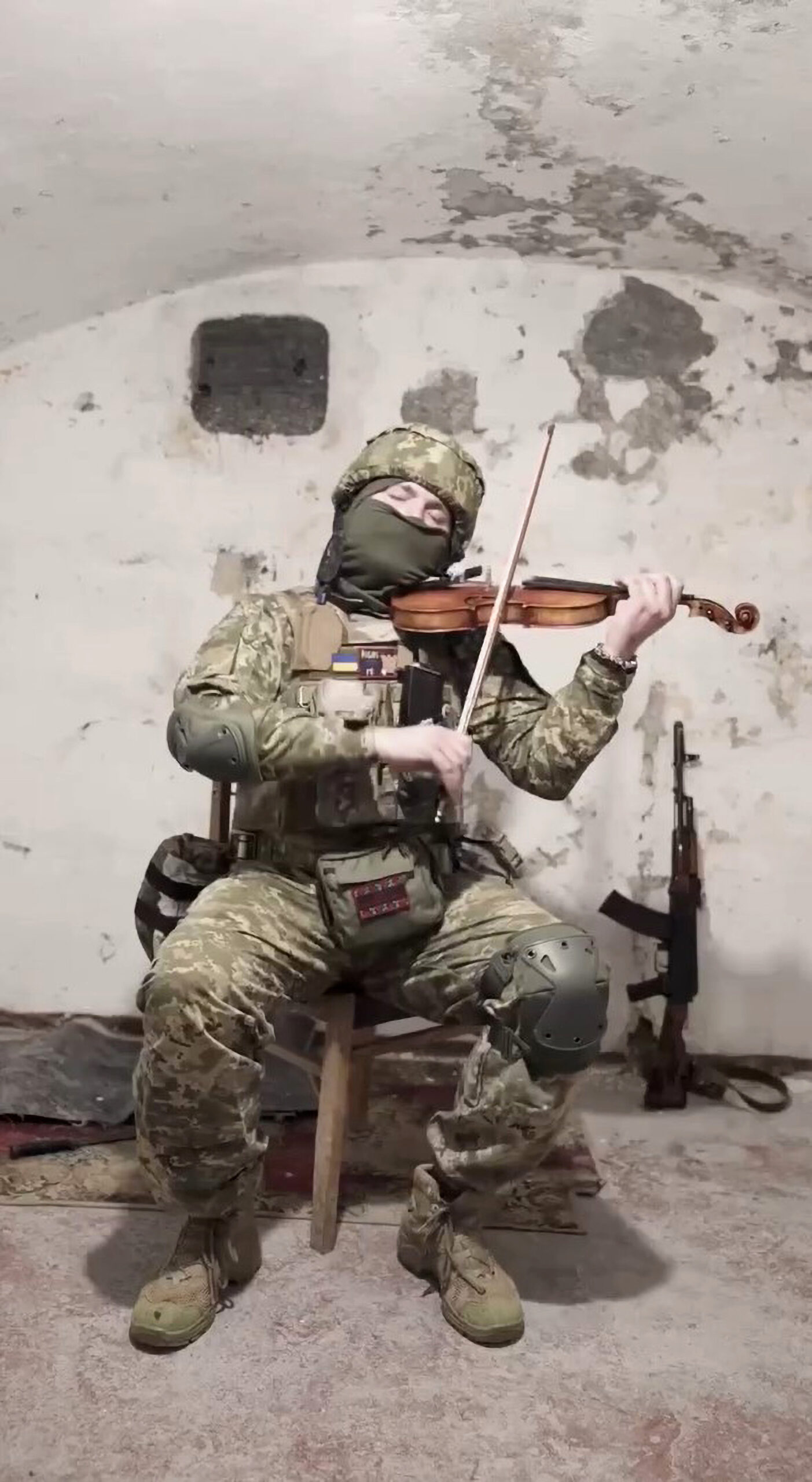 A professional musician serving in the Ukraine army has told how he lifts comrades’ spirits by playing tunes for them between battles in an Odessa bunker.

Moysey Bondarenko, 23 – who is serving in the Armed Forces of Ukraine – said he learned music in his home village in the Ukrainian region of Dnipropetrovsk Oblast as a boy.

A heartstring-pulling video of Moysey playing his violin in a bunker has gone viral on social media.

He told Zenger News: “In the bunker, I play for the guys to help keep them distracted. Someone sings, someone here plays the guitar. We try to hold on and support each other.

“We would love this to end so we could go out for a beer, watch soccer or just do something fun and relaxing.”

Moysey explained: “Most of my neighbors in the village were gypsies, they are insanely musical people, they spend all the time with guitars, singing songs.

“At the age of 17, I graduated from school, left for Kyiv and entered the Kyiv National University of Culture and Arts. Before the war, I lived in Kyiv and was in an orchestra. We were supposed to perform a concert in Mykolaiv when the war broke out.

“I am in contact with my mother in Dnipropetrovsk, which is close to some military activity, but she remains very positive.

“I have three older brothers. The eldest left for Slovakia with his wife and child, but he will definitely return to Ukraine. My other brothers are with my mother in Dnipropetrovsk.

“They all have cars and can leave the area if they need to, but for now everything is okay.

“I volunteered for military service, my eldest brother in Slovakia had already served in the army for two years before and is unfit for health reasons. My other brothers are helping the cause, but I’m the only one in the army.”

Moysey told Zenger News: “I was inspired to sign up for the army by Alexander Yarmak, a Ukrainian musician and family man who volunteered for the war in the very first days without any hesitation.

“This is a historical moment, this is the most useful thing I can do, the coolest feeling is when you feel fulfilled, needed, yes I have never held a machine gun in my hands before and it’s very scary, but if you understand that, you will be fine.

“I care about my country, I want to live here, it is important to prove myself and show courage in such moments, I finally found peace here. In the beginning, it was scary for a few days, of course, I had never been to war, but now I feel calm inside because this is exactly what our country needs now – defenders.”

He added: “We sleep in the bunker, but we don’t get much rest because of the bombs.

“We’re always ready. I am very much inspired by Ukraine and its people. I am not married, but there are guys here who have families, children, and I don’t know how they do it, everyone is an example to follow.

“We were all going about our business on February 23 and then the next day, we knew we had to drop everything, send our families away, and go to war.

“When the war is over, I want to play the violin wherever I can. I’d love to do as many concerts as possible. I love seeing people’s emotions when I play.”

Moysey said: “On my viral Instagram video where I play the violin in the bunker, I played Arcade by Duncan Laurence, the winner of Eurovision 2019.

“It’s a very beautiful song. There is also a video where I play a song by Belgian artist Stromae, which is also very cool.

“In the bunker, I play for the guys to help keep them distracted. Someone sings, someone here plays the guitar. We try to hold on and support each other.”

He added: “We would love this to end so we could go out for a beer, watch football or just do something fun and relaxing.”