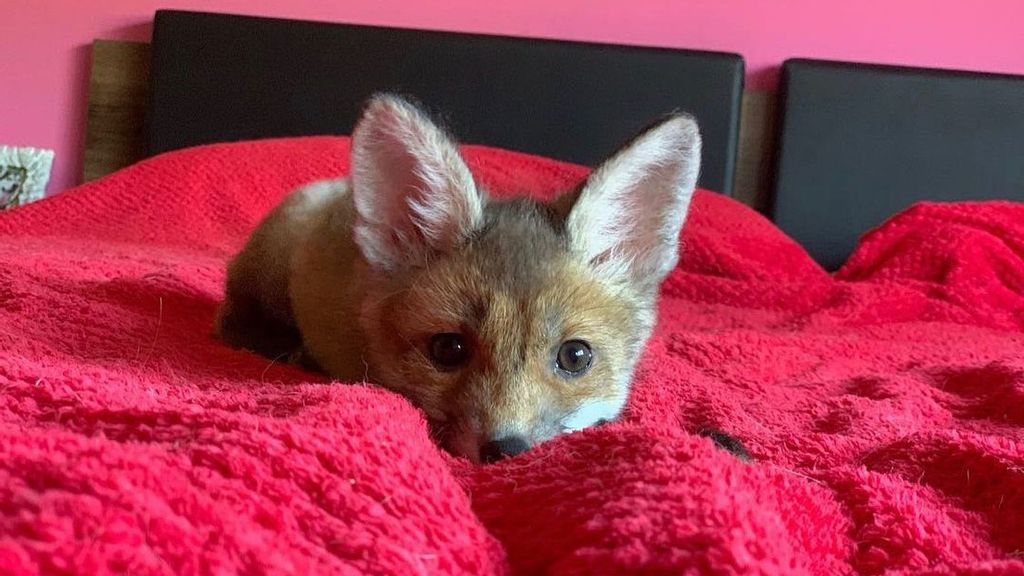 The fox, named Foxie, that was rescued by Michelle Krsnik in Croatia. (@croatian_fox/Zenger)

This is the moment a tame fox hand-reared after being abandoned as a cub, comes to get her toy teddy bear to take it back to her own cubs.

Michelle Krsnik, 19, who lives with Foxie in her home country Croatia, shares clips of the wild animal named Foxie on TikTok and Instagram where she is building a large online following.

But now she has her apparently own family of cubs.

Michelle does not see her very often except when she pops in to pick up the teddy she adored while she was growing up.

On TikTok, Foxie boasts 126,000 followers and numerous viral clips, including one viewed over 11 million times.

Michelle who is a veterinary technician said she saved Foxie as a little cub after coming across her alone and hungry in the woods about a year ago.

After the cub grew up, Foxie wanted to leave the house and go to her natural habitat, so Michelle and her partner let her.

However, the cute animal returns to the house every night for cuddles and treats, and Michelle shares the tender images on social media.

Videos show the fox shaking its tail and making cute squeaking sounds whenever Michelle approaches her.

Also happily flopping on the ground to be petted and stroked by her favorite humans.

The posts on social media have brought a wide range of reactions.

Some people, who don’t know the story of Foxie, are dubious about petting the wild animal.

Also, user @soldatova_mila said: “I’m not sure if this is the right thing to do”

@moses_nyagota26 used some sense of humor and said: “Don’t do that on a full moon”

It is clear that humans are not used to seeing this type of unusual interaction.

Michelle told Zenger News: “I love animals and I grew up with them. I had the opportunity to save one wild animal and I did it.”

“Foxie was found in the woods, without a mother, hungry, and cold.”

” At first we fed her milk and later she ate dog and cat food.”

“When Foxie grew up, she wanted to go out into nature and we let her go.”

” Since then, she visits us every night and cuddles with us.”

“I would just tell them that God sees everything.”