Preliminary data suggest that dogs can be trained within weeks to detect samples from patients with COVID-19 infection.
By Simona Kitanovska May 19, 2022
Facebook
Twitter
Linkedin
Email 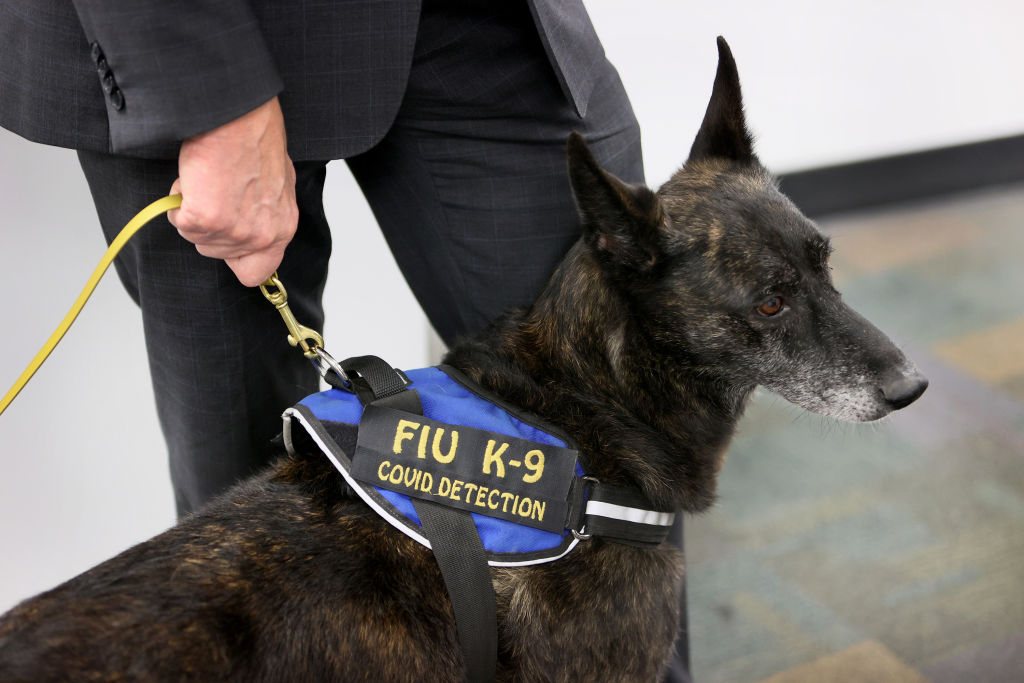 One Betta, a Dutch Shepard, waits for a command to sniff masks for the scent of COVID-19 at Miami International Airport on September 08, 2021 in Miami, Florida. (Photo by Joe Raedle/Getty Images)

Trained sniffer dogs can accurately detect airport passengers infected with SARS-CoV-2, the virus responsible for COVID-19 according to new research.

This method of detection is likely to be especially valuable, not only in the early stages of a pandemic when other resources might not yet be available, but also to help contain an ongoing pandemic, suggest the researchers.

The research, published in the open-access journal BMJ Global Health, reveals dogs have a very keen sense of smell and can pick up a scent at levels as low as one part per trillion, far exceeding any available mechanical techniques.

It is thought that they are able to detect distinct volatile organic compounds released during various metabolic processes in the body, including those generated by bacterial, viral, and parasitic infections.

Preliminary data suggest that dogs can be trained within weeks to detect samples from patients with COVID-19 infection, with a degree of accuracy comparable to that of a standard PCR nose and throat swab test.

While promising, these lab data results needed to be replicated in real-life conditions. The researchers, therefore, trained 4 dogs to sniff out SARS-CoV-2 in Spring 2020. Each of the dogs had previously been trained to sniff out illicit drugs or dangerous goods or cancer.

To test the dogs’ detection skills, 420 volunteers provided four skin swab samples each. The 4 dogs each sniffed the skin samples from 114 of the volunteers who had tested positive for SARS-CoV-2 on a PCR swab test and from 306 who had tested negative. The samples were randomly presented to each dog over 7 trial sessions.

The 4 dogs were then put to work sniffing out 303 incoming passengers at Helsinki-Vantaa International Airport, Finland, between September 2020 and April 2021. Each passenger also took a PCR swab test.

After re-evaluation with clinical and serological data, one was judged to be SARS-CoV-2 negative, one SARS-CoV-2 positive, and one a likely post-infectious positive PCR test result.

Similarly, the dogs indicated 4 PCR negative cases as positive. These were all judged to be SARS-CoV-2 negative.

Because the prevalence of SARS-CoV-2 among the airport passengers was relatively low (less than 0.5%), 155 samples from people who had tested positive on a PCR swab test were also presented to the dogs.

The dogs correctly identified just under 99% of them as positive. Had these ‘spike’ samples been included in the real-life study, the dogs’ performance would have reached a sensitivity of 97% and a specificity of 99%.

For the prevalence of 40%, they estimated a PPV of 88% and an NPV of 94.5%. This means that the information provided by the dog increases the chances of detection to around 90%.

In both scenarios, the high NPV backs the use of sniffer dogs for screening, with the aim of excluding people who don’t need a PCR swab test, say the researchers.

And they suggest that: “dogs could be used both in sites of high SARS-CoV-2 prevalence, such as hospitals (to prescreen patients and personnel), as well as in low prevalence sites, such as airports or ports (to prescreen passengers).” This could save both considerable time and resource, they say.

The researchers acknowledge that dogs trained to sniff out other substances may mistakenly identify these substances as SARS-CoV-2 positive. The required storage period of the training and spiked samples may also have affected the viability of the volatile organic compounds, they say.

A key finding was that the dogs were less successful at correctly identifying the alpha variant as they had been trained to detect the wild type. But this just goes to show how good dogs are at distinguishing between different scents, say the researchers.

“This observation is remarkable as it proves the scent dogs’ robust discriminatory power. The obvious implication is that training samples should cover all epidemiologically relevant variants. Our preliminary observations suggest that dogs primed with one virus type can in a few hours be retrained to detect its variants.”