Be careful how you cool off — it could save your life. 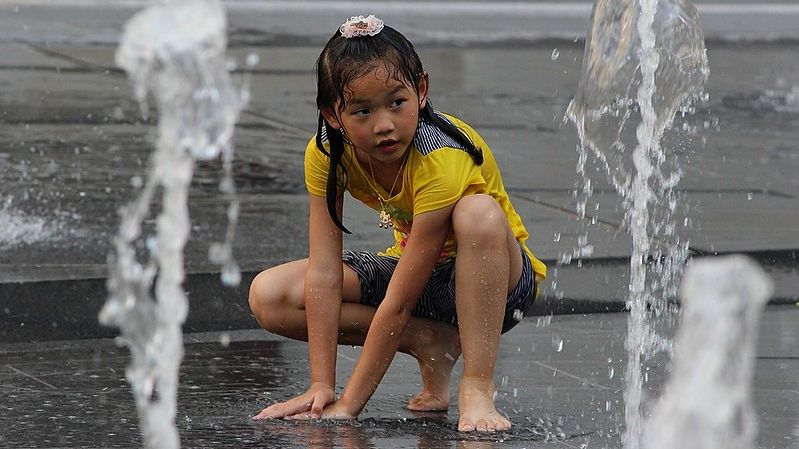 Outdoor fountains, such as this one in Philadelphia, are a popular way to cool down. (Joscelyn Paine/Flickr)

Heat waves are dangerous. They can lead to heat exhaustion or heat stroke, which could prove fatal. But in the rush to avoid those dangers, hidden perils remain.

A stretch of warm weather officially becomes a heat wave when a location faces two or more days of temperatures higher than the historical averages for that area. Those standards can change, depending on the region. A stretch of triple-digit temperature days in June may be average for Death Valley, but the same temperatures farther north might shatter all-time records.

The numbers on the thermometers may not matter as much as the acclimatization of local residents. Southern California residents may be accustomed to the heat and have the air conditioners ready to go, but a Seattle native who has never experienced similar temperatures could be in a world of trouble.

Heat is the most deadly weather-related killer in the United States, and hyperthermia and dehydration aren’t always the main culprits.

Here are a few of the hidden dangers you may not expect from a heat wave:

You’ve been stuck outside in the sweltering heat and dream of taking a freezing cold shower or taking a dip in a frigid stream. Don’t. The cold shock can kill.

“Fifty-five-degree water may not sound very cold, but it can be deadly,” the National Weather Service warns.

While warm outside air may trick you into thinking that local bodies of water are also warm, a sudden cold plunge can shock your brain and cause dramatic changes to your breathing, heart rate and blood pressure.

“Cold water drains body heat up to four times faster than cold air,” the NWS cautions. “The sudden gasp and rapid breathing alone creates a greater risk of drowning even for confident swimmers in calm waters. In rougher open water, this danger increases.”

Keith Bills, course manager at the National Ice Rescue School for the Coast Guard, told AccuWeather that cold shock can even trigger a gasp reflex that can cause you to uncontrollably inhale water when you go under.

Even after the initial shock, the second phase of cold water immersion can prove fatal.

Once water temperatures slip under 77 degrees Fahrenheit, the human body will begin to naturally preserve its vital organs by decreasing blood flow to the arms and legs, making swimming even more difficult, Bills said.

This type of short-term immersion causes “the loss of performance where you get cold muscle tissue, and you lose the ability to even swim, move your arms or even hold onto anything,” he said.

While death by drowning is a tragedy that can occur during any time of the year, hospitalizations related to non-fatal drownings have spiked during heat waves. They can be directly related to people spending more time than usual in the water to cool off.

Non-fatal drowning incidents can be more common during heat waves, given that rush to cool down. That leads more inexperienced swimmers and children into the water.

During Oregon’s record-breaking heat wave of June 2021, hospitalization queries for non-fatal drowning or submersion cases were abnormally high on June 27 to June 29, according to data released by the Oregon Health Authority.

During that three-day period, a stretch of record-breaking heat took hold, culminating in a high of 116 degrees, mind-boggling weather for a city that averages high temperatures in the upper 70s at that time of year and a new all-time high for Portland.

Data from the health authority also showed a sharp spike in hospital visits during the Oregon heat wave, related to exposure to cyanobacteria. According to the Centers for Disease Control and Prevention (CDC), cyanobacteria, or blue-green algae, which live in bodies of water and multiply quickly when in the right environment of sunlight and warmth.

“Blooms can form in warm, slow-moving waters that are rich in nutrients from sources such as fertilizer runoff or septic tank overflows,” the CDC wrote.

The cyanobacteria began blooming at the same time as Oregon residents began jumping in lakes to escape the heat wave. As a result, hospitalization rates for bacteria exposure spiked during that final week of June.

“Exposure to cyanobacteria can result in symptoms including skin rash, diarrhea, cramps, vomiting, numbness, and fainting,” the health authority said.

Dehydration is overhydration’s far more sinister sibling, but the dangers of overhydration are often unrecognized and under-addressed.

The danger from drinking too much water comes when the sodium counts in your body become diluted. This triggers hyponatremia, a condition that essentially drowns the own body internally.

“The primary issue of having too much water is you drown in your own water a bit. It dilutes the sodium in your blood and your biggest risk is that it can cause a change in the way your brain works,” Dr. Matthew McElroy, a sports medicine specialist and primary care doctor with Geisinger Health Systems, told AccuWeather.

Heat waves appear to increase the prevalence of hyponatremia, particularly among users of medical drugs that heighten patients water retention. When those patients consume more water during heat waves to cool themselves down, they subsequently increase their odds of diluting the sodium in their bodies, according to a publication from researchers at Linköping University in Sweden,