A hero cop dragged a drink driver from her sinking car through her sunroof after she crashed into a lake.
By Darko Manevski May 18, 2022
Facebook
Twitter
Linkedin
Email 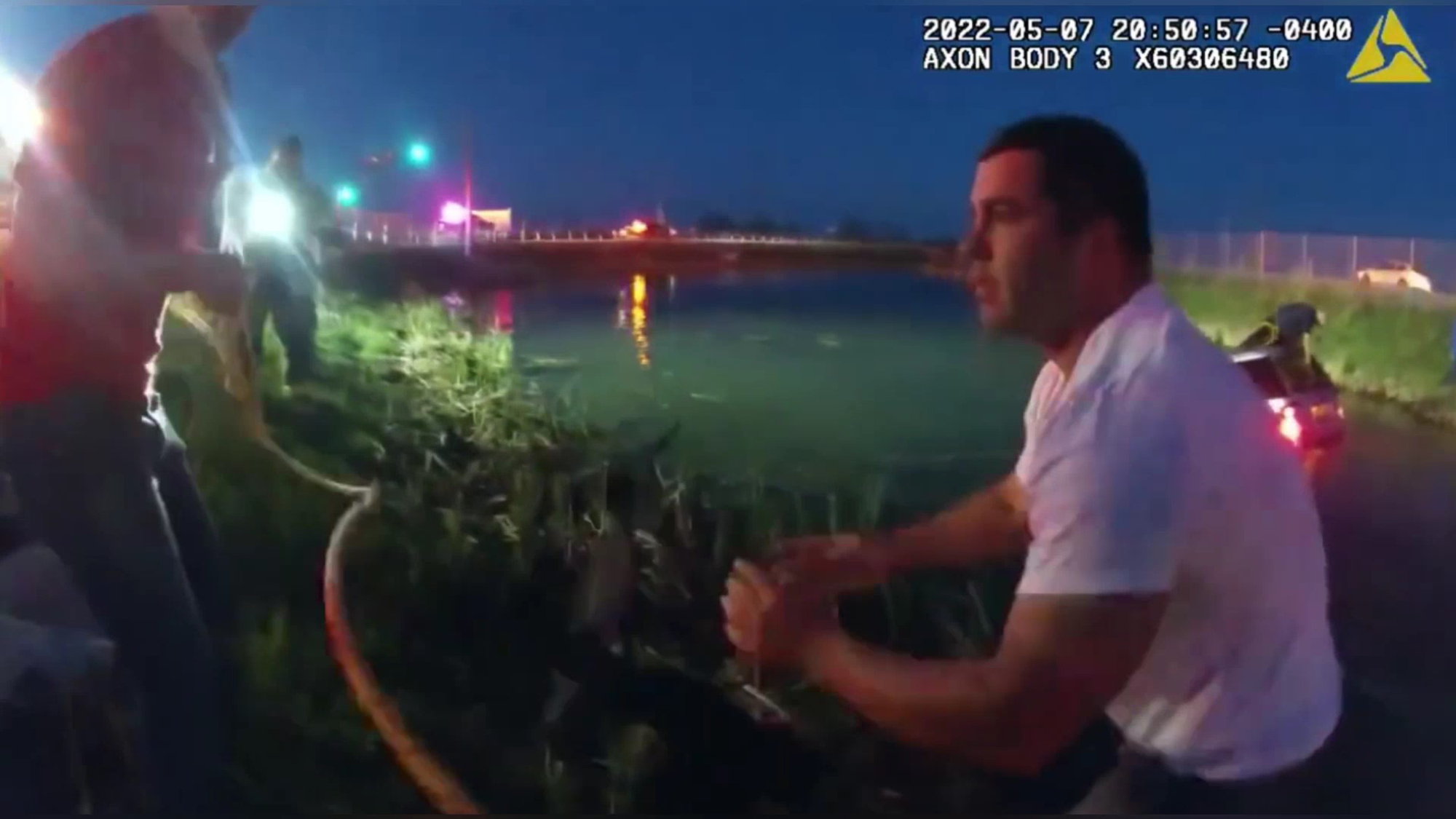 NY first responders rescue driver from a car that crashed into a reservoir in Le Ray, Jefferson County, New York, USA on May 7, 2022. (NYSP PIO/Zenger)

A hero cop dragged a drink driver from her sinking car through her sunroof after she crashed into a lake.

Joanne M. Tanner, age 61, had apparently been speeding when she careered off the road through a fence and into the water.

By the time police and firefighters in Le Ray, Jefferson County, New York State, got to her Ford Explorer, the SUV was sinking fast.

After abandoning attempts to free her through the driver’s doors, a state trooper leapt onto the roof and smashed the sunroof.

Dramatic footage of the rescue shows the trooper battering his way in through the glass.

Tanner was so close to drowning, say officials, that the trooper could see her hair floating up to the sunroof.

Then – as the car disappeared further under the surface – the trooper and firefighters hauled her to safety.

In a statement obtained by Zenger News, the New York State Police (NYSP) said on 13th May: “On Saturday, May 7, State Police responded to a one-vehicle crash at the intersection of State Route 11 and State Route 26, town of Leray in which the operator drove the vehicle into a retaining pond.

“While Troopers and Fire personnel were en route to the call, they were notified by the Jefferson County 911 Dispatch that the vehicle was still occupied by the female driver.

“The 2010 Ford Explorer drove off the roadway and through the guidewire. It then continued through a six-foot chain-link fence surrounding the reservoir and entered the water.”

The State Police added: “When Trooper Christopher J. Hardy (SP Watertown) arrived on the scene, he exited his patrol vehicle and followed the path to the water where the Ford Explorer was still floating.

“As several Evans Mills firefighters were already on scene, Evans Mills Assistant Fire Chief John Russel tied a throw bag to himself and entered the water.

“Tpr. Hardy then removed his gunbelt and vest, tied off to a throw bag, and entered the water to assist with the driver. Assistant Chief Russel used a steel pole to break the rear window of the SUV.

“He then entered the vehicle through the rear window. The driver was submerged up to her shoulders in the driver seat and unable to move.

“Russel attempted to pull her from the driver’s seat to the rear compartment but was unsuccessful. Both Tpr. Hardy and Chief Russel then attempted to open the doors but the locks would not disengage.”

The police added that the vehicle then shifted and began to “submerge further underwater”.

NYSP said: “As the vehicle began to shift, the front compartment filled with water submerging the driver. With a steel pole, Tpr. Hardy climbed on top of the vehicle and could see the driver’s hair floating to the glass of the sunroof.

“He began striking the sunroof ensuring not to strike the driver’s head and successfully shattered the glass. He reached down into the vehicle to grab the driver.

“By this time, Chief Russel had exited the vehicle, climbed on top, and assisted with pulling the victim through the vehicle’s sunroof. After holding her breath for about 20 seconds the driver was removed conscious and alert.

“Trooper Ryan L. Gentile then entered the water and swam to the vehicle to assist. Trooper Rexford C. Reynolds, who was tending to the throw bag, pulled Tpr. Hardy and the victim to shore.

“The driver showed signs of hypothermia. She was then transported to Samaritan Medical Center for hypothermia and minor lacerations.”

The police continued: “The female driver, identified as Joanne M. Tanner, age 61 from Evans Mills, NY was treated and released.

“She was subsequently arrested for DWI [driving while intoxicated or impaired] (misdemeanor), Aggravated Unlicensed Operation 1st degree (E-felony), and speeding.”

Mills was issued an appearance ticket and is scheduled to appear in Watertown CAP Court on May 27.