Photo of the killer croc was featured on the official U.S. Border Patrol Facebook page with a heavy-handed grim sense of humor.
By Martin M Barillas May 18, 2022
Facebook
Twitter
Linkedin
Email 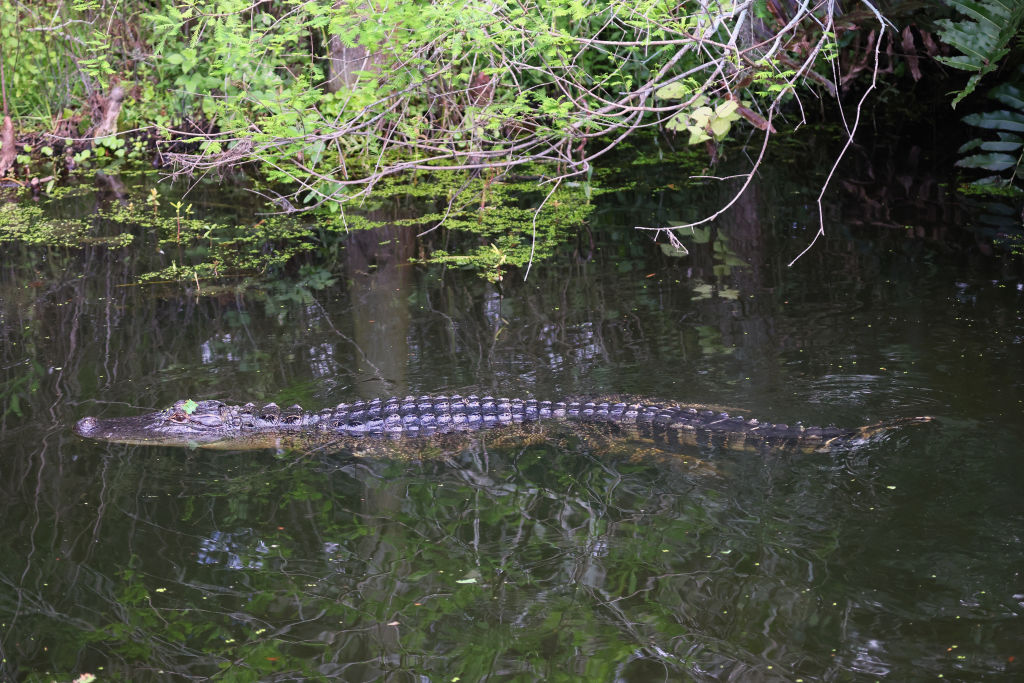 An alligator swims through the Wakodahatchee Wetlands on May 15, 2021 in Delray Beach, Florida. (Photo by Bruce Bennett/Getty Images)

Giant alligators have been released into the Rio Grande to deter illegal migrants from crossing the border river to the United States, reports Mexican media.

Eagle Pass is across the Rio Grande from Piedras Negras in the Mexican state of Coahuila.

The photo of the killer croc was featured on the official U.S. Border Patrol Facebook page with a heavy-handed grim sense of humor.

The page stated: “Alligators ask lots of questions! So much so that they would make great interri-Gators&mldr;Or maybe even an investi-Gator&mldr;Or if you need directions, a navi-Gator&mldr;”

Now Mexican media has claimed that alligators have been released deliberately into the river to deter migrants.

Mexican newspaper Excelsior reported that the reptile is a “crocodile” claiming it was there to scare illegal immigrants from crossing to the U.S. side.

And the News Collective website reported: “It is said that the Texas Ranch Association suggested dumping alligators in the Rio Grande to solve the problem without caring about the deadly dangers this posed.

“The source added that those were rumors since the end of last year, and now we see it as a reality.”

And a representative of a Texas ranchers’ organization said he did not know of any organization bearing that name.

Border Patrol agents use watercraft, horses, and vehicles to patrol the river border dividing Texas from the Mexican states of Coahuila, Nuevo Leon, Tamaulipas, and Chihuahua.

They have encountered at least 542,000 illegal migrant crossings in the first three months of 2022.

Extensive fences, patrols, and even alligators have not deterred hundreds of thousands of migrants seeking to enter the United States illegally, mostly from Mexico and Central America, but increasingly from elsewhere.

March saw over 221,000 illegal migrants crossing the Texas border, according to the Border Patrol, which was despite federal government limits imposed in response to the COVID-19 pandemic, according to the agency.

In April, the number crossing at all points of the border from Texas, through Arizona, New Mexico, and California rose to just over 240,000, according to a May 16 court filing by the Department of Justice.

According to Texas Parks and Wildlife, crocodiles are not native to Texas due to the state’s cool winters.

The American crocodile (Crocodylus acutus) is rare and found in brackish waters in Florida, Mexico’s coastline, and in various Caribbean nations such as the Dominican Republic.

The freshwater American alligator (Alligator mississippiensis) is a related albeit distinct species, which does not tolerate salt water.

Native to Texas, alligators are found in wetlands, marshes, lakes, and in marshlands along most of the areas along the Gulf of Mexico, according to the Texas state government.

Historically, alligators ranged as far west as Laredo at the 100th meridian on the Rio Grande, hundreds of miles from Eagle Pass, but were reduced because of hunting, reduced levels of water, and pollution.

According to Texas Parks and Wildlife: “The American alligator is the only crocodilian native to Texas.”

They explained small populations living outside the modern range “may represent remnant populations from a former range or from released American alligators.”

The name alligator is a deformation of lagarto, Spanish for lizard. The Spanish word for crocodile, however, is cocodrilo.

On the Mexican side of the river, where it is known as Rio Bravo del Norte, there are signs warning against “lagartos” and the danger they pose to hapless humans.

Mexican media reported in 2012 that “crocodiles” were spotted on the Mexican side of the river at Reynosa, near the mouth of the river on the coast of the Gulf of Mexico.

Mexican media have reported in the past that “crocodiles” have also been spotted in Piedras Negras, Nuevo Laredo, Matamoros on the Rio Grande, which Mexicans call Rio Bravo del Norte.

Native to Mexico and Central America is Moret’s crocodile (Crocodylus moretii), which is found in the Mexican state of Tamaulipas, just across the international border from Texas.

In response to an email, Professor David M. Hillis of the University of Texas wrote with regard to media reports: “I wonder if this is a language issue?” and noted that scientists sometimes refer to crocodiles, caimans, and alligators as crocodilians.

He also questioned whether there is any reliable confirmation of crocodiles living in the river, adding: “The photo in the story certainly looks like an alligator to me.”

Hillis, an expert on molecular evolution, phylogenetics, and systematics, wrote he is not surprised that introduced alligators live in the Rio Grande but would be surprised if there are any crocodiles there.

He wrote: “I have not seen reports of Morelet’s crocodiles from north of central Tamaulipas (around Ciudad Victoria), so nowhere near Texas or the Rio Grande. But yes, unlike the American alligator, Morelet’s crocodile is usually found in fresh water. However, they are a smaller.”

Alligator attacks are rare but do happen.

In 2015, a 28-year-old Texas man was attacked and killed by an alligator while swimming, and a 500 pound ‘gator nearly grabbed a 4-year-old girl near Galveston on the Gulf of Mexico shore in 2020.