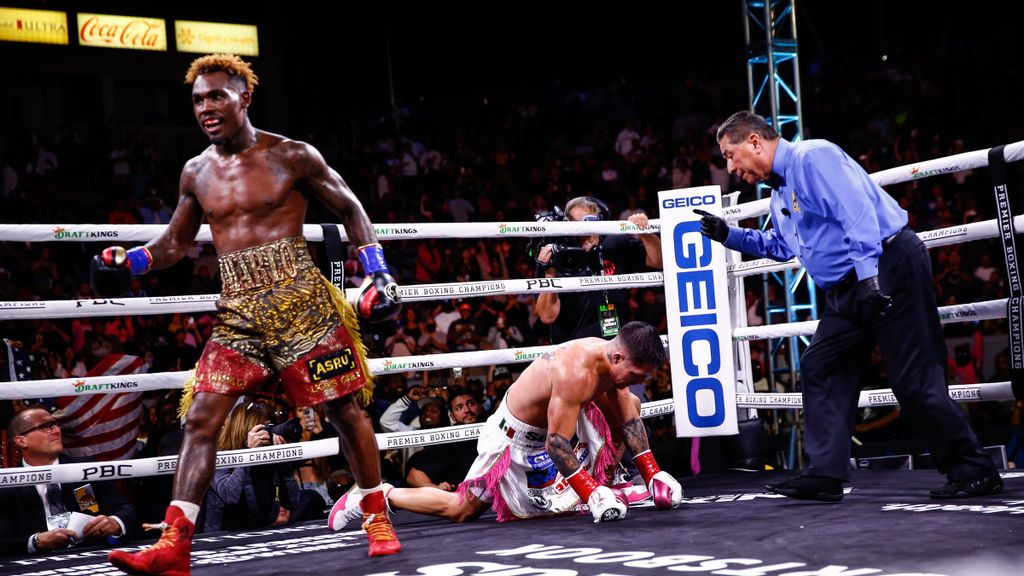 Jermell Charlo delivered an early birthday present to himself in a 154-pound championship stoppage Saturday, twice flooring Brian Castaño in the final round of a 10th-round knockout victory.

In front of near-sellout crowd of 7,406 at Dignity Health Sports Park in Carson, Calif., Charlo, who turns 32 on May 19, became the division’s first undisputed champion in the history of the sport by adding the Argentine’s WBO crown to his IBF/WBA/WBC versions.

Charlo’s first knockdown on Saturday came with 52 seconds remaining in the 10th round off an equilibrium-stealing left to the temple. Castaño rose on rickety legs, but Charlo seemingly knew the end was near.

“Once I saw him crumble right in front of me, I was pretty sure he was going to get back up. That was the first knockdown, but I knew it was over, and that was all she wrote,” Charlo said.

Charlo pounced after Castaño got up, chasing him to the ropes as the result of a four-punch combination that floored his rival for good. Castaño was still on his knees when referee Jerry Cantu waved an end to the fight with 27 seconds left.

“We were both fighting back and forth. It was power, back and forth,” Castaño said. “And then his right hand came over the top and won the fight for the knockout. He’s a champion. He hit me and he got me.”

Charlo said he “knew that once I got into this arena, fighting outside in this beautiful place that I had to get it on. This could be the fight of the year. We went back and forth. [Castaño] landed some good shots.”

“This is unbelievable. I did it for us, USA. Shout out to Carson, California, Los Angeles and the whole surrounding area. I appreciate you all for coming out. We put on a show,” said Charlo. “I gave you all 10 hard-fought rounds. I gave it my all, and this was the result.”

“This was a little nerve-wracking. It felt like my first fight, where you get nervous. I had ants in my pants. I knew Castaño was going to give it his all, and I knew I had trained very, very hard. I came in at 152 because I was really in shape. I wanted to make sure that this was my fight to win.”

“The jab landed well, and the right hand came perfectly, and I threw the left uppercut and then the body shot before he went down again,” Charlo said of Saturday’s fight. “I just started seeing my punches being more effective, and I got stronger in the later rounds. And that’s what happened.”

In their previous fight, Charlo wobbled but didn’t finish Castaño in the second round, chasing the staggered Argentine around the ring. Castaño pinned Charlo against the ropes and nearly finished him in the second round, even as “The Iron Man” hurt  Castaño once each in the 10th and 11th.

“I listened to my corner this time. I got into my [rhythm] in around the seventh round,” said Charlo, who is trained by Derrick James. “I started sitting down on my punches a little bit more instead of boxing so much and moving around. I saw that he was wearing down a little bit, and I was breaking him down. I became aware of the obvious and stepped up.”

Charlo added Castaño to an impressive resume that includes a sixth-round TKO of Joachim Alcine (October 2015) among the four champions he has vanquished along with southpaw Austin Trout (majority decision), Tony Harrison (11th-round KO) and Jeison Rosario (sixth-round KO).

“This is a legacy fight. This is legendary. I’m a legend. Thank God,” Charlo said after Saturday’s victory. “This is a beautiful thing, and they’re going to keep on putting guys in there against me. When you’re at the top like this, you get a bunch of mandates and you get a bunch of No. 1 guys.”

Prior to his first fight with Castaño, Charlo retained his WBC crown and dethroned hard-punching Rosario by a three-knockdown, sixth-round stoppage in September 2020, adding Rosario’s IBF and WBA crowns to his WBC version.

“I don’t know what I’m gonna do next,” Charlo said. “Life is beautiful for me. It’s amazing. I work really hard, and I’m seeing the fruits of my labor. I’m just super-excited for what me and my brother have put on. The future is bright.”