The Ukrainian military confirmed on May 16 that two mines appeared on the southern coast during storms over the weekend.
By Lee Bullen May 17, 2022
Facebook
Twitter
Linkedin
Email 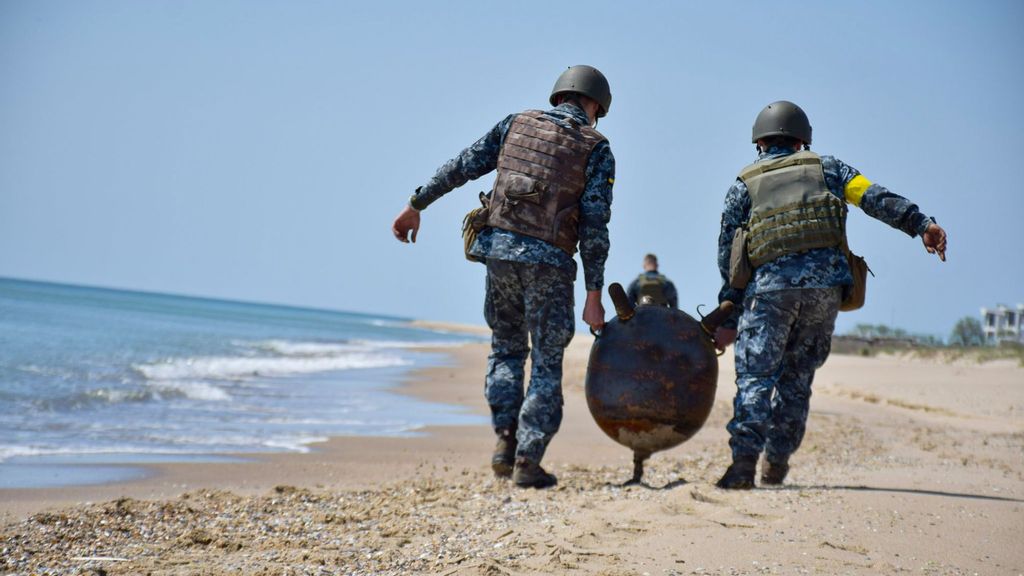 In the Odessa region, 2 naval enemy anchor mines, which were brought close to the coast in stormy weather, were removed and neutralized by specialists of the Navy subversive team, in May 2022. (@okPivden/Zenger).

This is the moment Ukrainian soldiers find a sea mine that had been washed ashore during stormy weather.

The Ukrainian military confirmed on May 16 that two mines appeared on the southern coast during storms over the weekend.

The Operational Command South, a formation of the Ukrainian Ground Forces in southern Ukraine, said on May 14: “In the sea in the Odessa region, near one of the beaches, an enemy mine was found.

“Being tens of meters from the shore, it does not pose a direct threat. However, once again we are reminded of the dangers of swimming and other uses of our coastal waters.

“We thank our fellow citizens for their vigilance and notifying us to take prompt action. The situation is under the control of the relevant units of the Ukrainian Navy. The mine will be cleared by explosive specialists.

“We emphasize once again that, for your own safety, you should not approach the beaches and coast, go out on the water in a vessel, or even go swimming.

“The defence forces took countermeasures after the enemy insidiously scattered sea mines in our coastal waters.”

Operational Command South added: “Be wise and conscious, take care of yourself and together we will save Ukraine!”

The following day, the Ukrainian Navy confirmed: “In the Odessa region, two naval enemy mines, which were brought close to the coast in stormy weather, were removed and neutralized by specialists of the Navy bomb team.”

Russian troops invaded Ukraine on February 24 in what the Kremlin is still calling a “special military operation”. May 16, 2022 marks the 82nd day of the campaign.

Meanwhile, Russia is expected to up its bombardment of the Azovstal steelworks plant, the last area of the strategic port city of Mariupol that is not under Russian control.