The footage was filmed near the city of Severodonetsk in the easternmost Ukrainian region of Luhansk Oblast.
By Lee Bullen May 17, 2022
Facebook
Twitter
Linkedin
Email 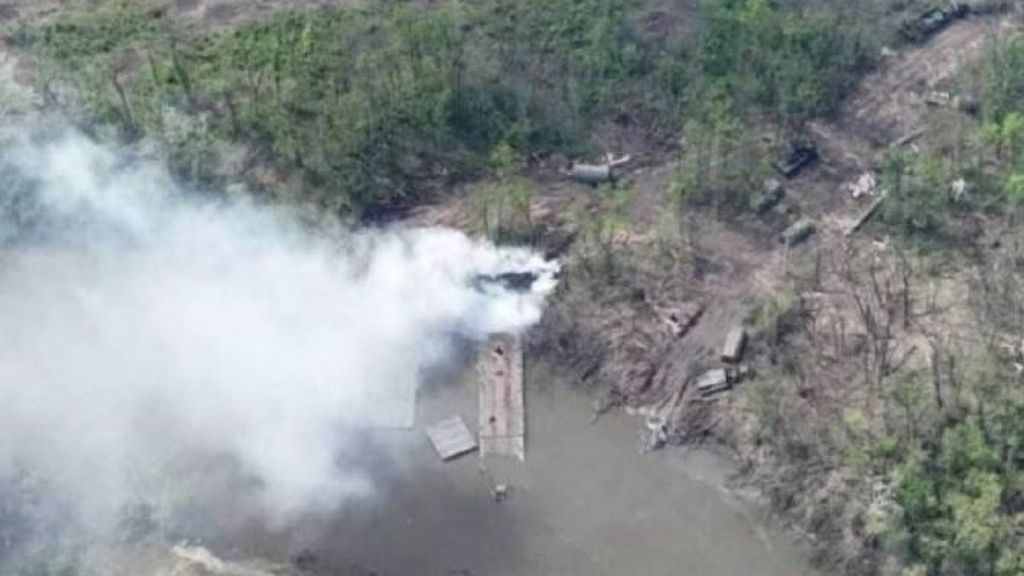 Ukrainian special forces in order to stop the offensive in the direction of Severodonetsk and Lysychansk, destroyed the railway bridges captured by the Russian Army, in the Luhansk region, Ukraine, in May, 2022. (@Pravda_Gerashchenko/Zenger)

This is the moment the Ukrainian forces blow up a railway bridge to prevent the Russians from advancing in the Luhansk region.

The footage was filmed near the city of Severodonetsk in the easternmost Ukrainian region of Luhansk Oblast.

According to reports, members of the National Guard, the 8th Separate Special Forces Regiment of the Armed Forces of Ukraine, and the 15th Main Directorate (Glavnoye Upravleniye Ministerstvo Oborony) of the General Staff took part in the destruction of the rail route.

The railway bridge, offering a line between Rubizhne and Severodonetsk, was seized by the Russian forces and destroyed by the Ukrainian military to hinder their advancement.

Rada TV shared the footage with the message: “In order to stop the orcs’ attack in the direction of Severodonetsk and Lysychansk, railway bridges have been destroyed.”

Ukrainian government advisor Anton Herashchenko, 43, said: “The Russian army will probably prioritize capturing Severodonetsk overreaching the administrative borders of the Donetsk region. This is the opinion of analysts at the American Institute for the Study of War (ISW).

“Unsuccessful attempts by the occupiers to cross the Seversky Donets [river] in the Kremennaya area may shift them further to the east. According to the ISW forecast, Russian forces will likely complete their withdrawal from the vicinity of Kharkiv City.

“In the near future, most likely, a Ukrainian counteroffensive will begin in the Izyum region.”

Russian troops invaded Ukraine on February 24 in what the Kremlin is still calling a “special military operation”. May 16, 2022 marks the 82nd day of the campaign.