VIDEO: Quit Horsing Around: Yoda The Horse Somehow Traps Himself In Stable Bars

The video was filmed by Sydney R Steadman, a horse trainer at 4ever R Acres in the Canadian province of Saskatchewan, last month.
By Lee Bullen May 17, 2022
Facebook
Twitter
Linkedin
Email 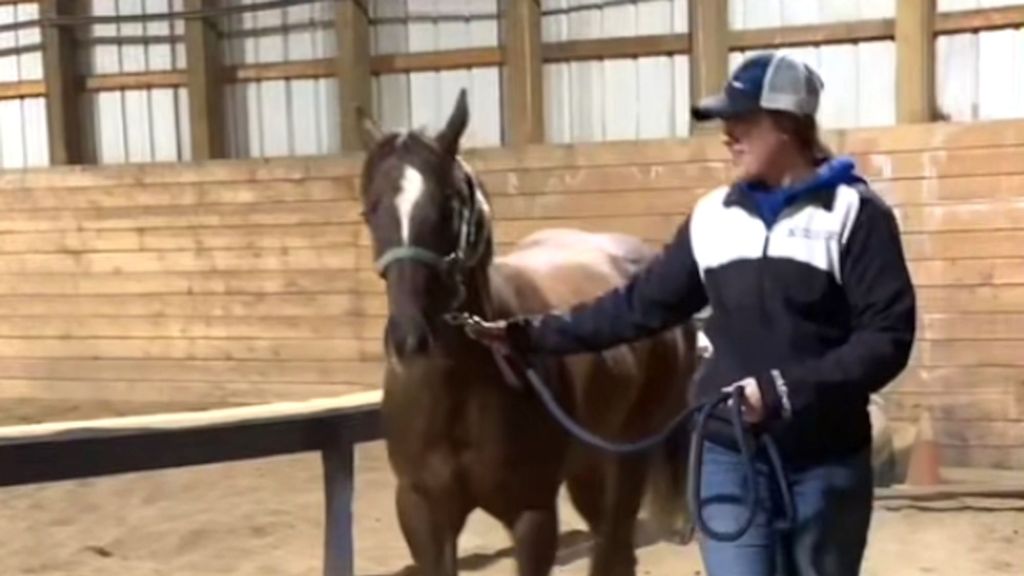 Yoda is fine after the accident that occurred at the beginning of April 2022, Saskatchewan, Canada. (@sydneykmrs/Zenger).

This is the moment a giggling Canadian horse trainer comes across a nag that somehow trapped itself horizontally in the bars of its stable.

The video was filmed by Sydney R Steadman, a horse trainer at 4ever R Acres in the Canadian province of Saskatchewan, last month.

She first posted the video on TikTok where it went viral before sharing the clip on her Instagram account with the message: “The original has 5.1mil views now but this one is my fav.”

Sydney told Zenger News that the video features Yoda the horse, who was born on the farm and is one year old.

She said: “He is perfectly fine and was not injured, I posted an update of him so everyone can see he is okay.”

In the first video, Sydney is heard giggling as she approaches Yoda’s stable and sees him somehow trapped horizontally in the bars.

Sydney adds: “What the f*ck! How am I going to get you out?”

Yoda responds by turning his head slightly to acknowledge his trainer.

In the second video, Sydney gives concerned viewers an update on Yoda’s wellbeing.

While filming the horse, standing upright on its four legs this time, she says: “So everyone was wondering if Yoda was okay. Yoda is perfectly fine.

“He was zero percent fazed by the incident.”

Sydney whips off the horse’s cover and tells watchers: “The grand Yoda reveal so everyone knows he’s alive and well!”

She also talks about the band that Yoda has around his neck and says:”It is not for cribbing, just for keeping his neck nice and skinny.”

She then shows how the band is not very tight for the viewers who were worried about Yoda’s safety.

Yoda is then seen being taken for a little walk around the barn.

During the walk Sidney said: “Yoda is only a yearling”

She adds: “He is doing pretty damn good!”

The next part of the video shows how Sidney recreates the rescue of Yoda with her friend.

Sidney shows that she pushed Yoda’s head and he just rolled over to a normal position while her friend hilariously mimics the horse movements.

At the end of the video Sidney also clarifies why Yoda was in such a dangerous enclosure by showing a nearby cage occupied by a foal and its mother.

She told Zenger News: “He was fine. He was there for maybe three minutes. I left to feed an animal outside and came back to find him like that.”

She added: “No Yodas were harmed in the filming of the videos.”