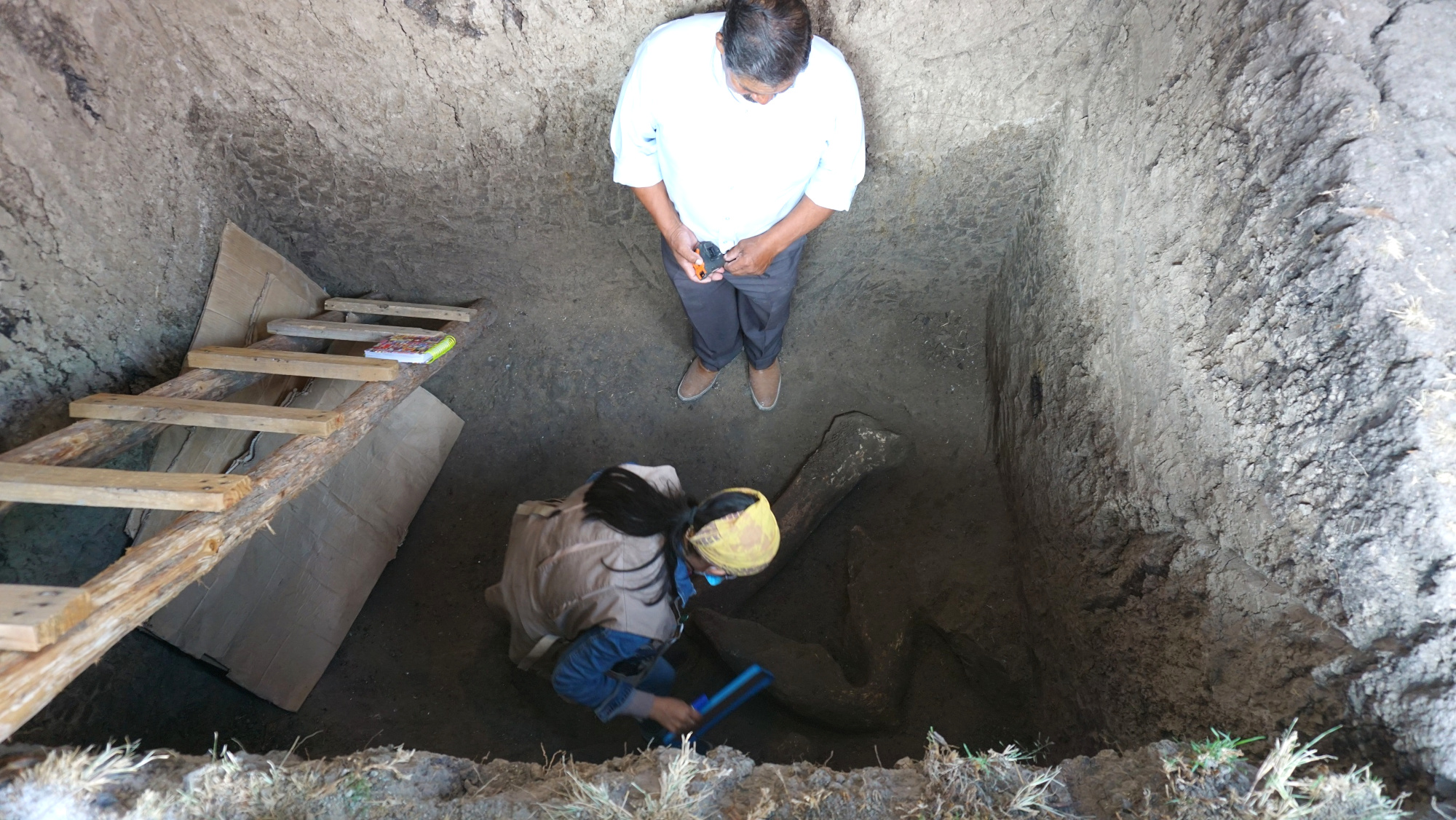 A family building a toilet discovered bones from a mammoth in their garden.

The remarkable find of the bones – believed to be up to 10,000 years old – was made on the private property in San Lorenzo Toxico in the municipality of Ixtlahuaca in Mexico State, Mexico in April.

The Morales family were manually excavating land to build a cistern when they found the palaeontological remains at a depth of 2.2 meters (7ft 3in).

Fabian Morales first thought he had reached a ‘tepetate’ – a layer of hardened soil found in Mexican volcanic regions.

But it did not take long for him to realize it might actually be a piece of bone. He told his son Adolfo and the two reported the find to the National Institute of Anthropology and History (INAH).

It transpired that Fabian had indeed come across a femur and jawbone of a proboscidean – any of the group of mammals that includes elephants and their extinct relatives – that could be a 10,000-year-old Columbian mammoth (Mammuthus columbi), said experts.

INAH said (in Spanish) in a statement obtained by Zenger News: “A proboscidean femur and jaw were identified, whose dimensions range between 26 and 50 inches; It is estimated that they are about 10,000 years old.

“The Ministry of Culture, through INAH, has recommended a rescue project to lift the bone remains and a segment of charred organic matter.

“A mandible and a femur of a proboscidean, identified by researchers from the National Institute of Anthropology and History (INAH) in a private property in the town of San Lorenzo Toxico, municipality of Ixtlahuaca, represent the first traces of megafauna recorded in this locality in the State of Mexico.”

INAH archaeologist Ana Laura Navarro Martinez said: “For now, the bones only tell us that they belong to the Proboscidea family (a large mammal with a trunk), and it will be until megafauna specialists do the analysis when it will be defined whether they belong to a specimen of the Columbian mammoth species, already recorded in the Toluca Valley.”

Following analysis, the experts should be able to determine whether the bones hail from the same individual and, if so, how old it was and if it was male or female.

The statement said: “One factor that would allow carbon-14 dating…is the presence of carbonized organic matter near the location of the bones.

“Although…it would be necessary to define whether such organic material – perhaps belonging to an ancient tree – is associated with the same geological stratum as that of the bone remains, its dating would provide more precise information on the age of the ensemble.”

The femur and jaw are reportedly in a good state of preservation, apart from the femoral head, which was hit by a pick during the excavation of the space for the cistern.

Navarro Martinez hopes the research on the bones “will allow us to collect the greatest amount of information on the site, seeking to better understand the megafauna that populated the Toluca Valley”.