Mum Joanne Zephir, 36, admitted to making the younger girl and her sister drink bleach and said she then planned to kill herself.
By William McGee May 16, 2022
Facebook
Twitter
Linkedin
Email 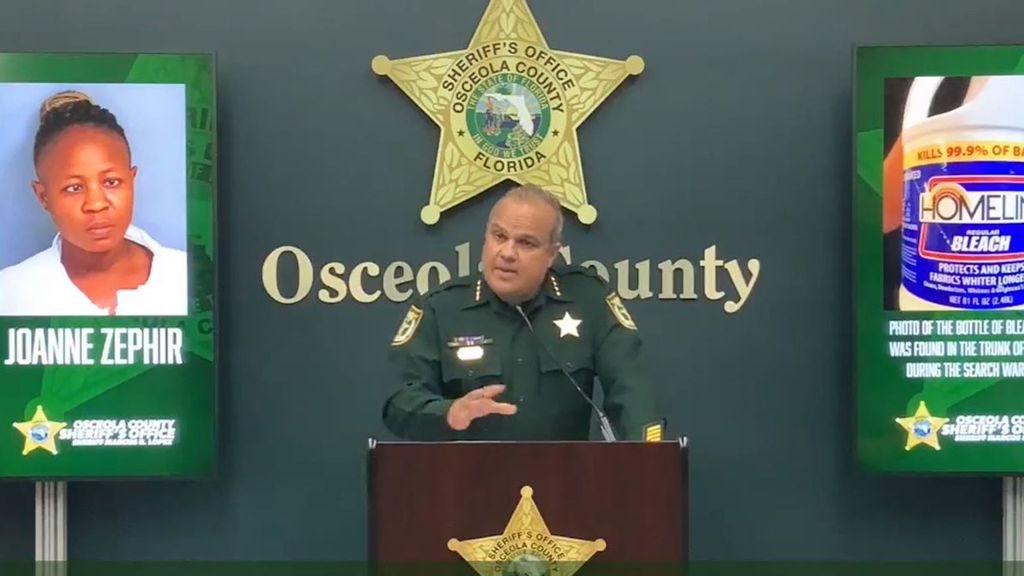 Sheriff Marcos R. Lopez during a press conference about the case, on 12th May. (Zenger)

A mother who forced her children to drink bleach told police she had been made to do it by a voodoo spell after her three-year-old daughter was found dead.

Mum Joanne Zephir, 36, admitted to making the younger girl and her eight-year-old sister drink bleach and said she then planned to kill herself.

Her three-year-old daughter had also been strangled, say police investigating the crime in Poinciana, Florida, USA.

Officials say they found Zephir and her daughters outside a church on 8th May.

The mum had passed out behind the steering wheel of a car with her three-year-old daughter in the back seat unresponsive.

Zephir’s other daughter was found on the tarmac close to the entrance of the church.

All three were rushed to a nearby hospital, where medics confirmed the younger daughter’s death.

The older daughter was handed over to other family members.

The Osceola County Sheriff’s Office took the mother into custody for an outstanding arrest warrant in Orange County for attempted murder and aggravated battery.

She is believed to have admitted her guilt in the alleged crime in Orange County to a relative earlier on.

Zephir is said to have been planning to hand herself in to the authorities over the warrant but said she wanted to spend time with her kids beforehand.

The Sheriff’s Department said she phoned the same relative hours later and admitted she had killed her younger daughter.

Osceola County Sheriff Marcos R. Lopez said she had told them “the eight-year-old was also going to die, and then she would kill herself”.

When questioned, Zephir is said to have told officers she forced her children to drink bleach before choking the younger girl.

According to Lopez: “The reason for doing this to her children was because the victim in Orange County must have put a voodoo spell on her, making her harm her children.”

The suspect is currently in custody at Osceola County Jail and is charged with a count of attempted murder and another of aggravated child abuse.

The first charge may be upgraded to murder pending the results of the post-mortem.

“On May 08, 2022, the Osceola County Sheriff’s Office received a report of a suspicious incident just after midnight. Deputies responded to 4912 Old Pleasant Hill Road in the Poinciana area. Deputies located three individuals at the location.

“The investigation is ongoing and it is an isolated incident and there is no threat or danger to the public.