The grenade - a Mills bomb No. 36 - was unearthed in a field in Lavelsloh, Nienburg district, at 7 p.m. on Tuesday, May 10.
By William McGee May 16, 2022
Facebook
Twitter
Linkedin
Email 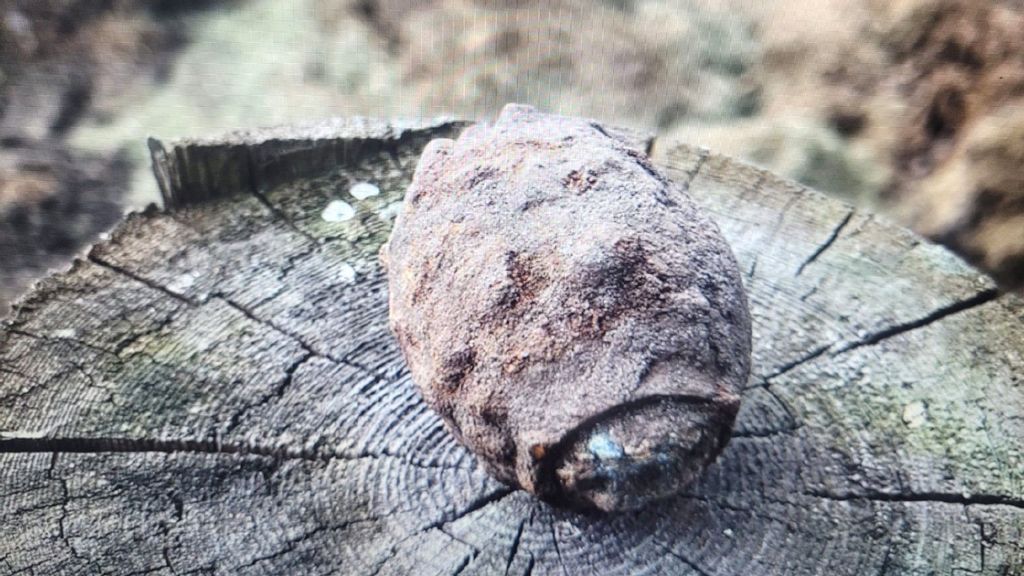 The British type No. 36 hand grenade also known as Mills bomb which was found during asparagus harvest in the German city of Nienburg located in the state of Lower Saxony. (Polizeiinspektion Nienburg, Schaumburg/Zenger)

A shocked farmer has revealed how he dug up a deadly British hand grenade as he harvested his crop of asparagus in Germany.

The grenade – a Mills bomb No. 36 – was unearthed in a field in Lavelsloh, Nienburg district, Lower Saxony, north-western Germany at 7 p.m. on Tuesday, May 10.

After realizing what he had found, the farmer called police to help get rid of the grenade, which saw widespread use in the First and Second World Wars.

Experts said the bomb was too unstable to travel and decided to detonate it on site in a controlled explosion.

Police cordoned off the area and evacuated 23 neighbors while bomb disposal experts made the grenade safe.

It was successfully detonated at 11 p.m.

The Nienburg/Schaumburg Police Department said in a statement obtained by Zenger News (in German): “On Tuesday (May 10, 2022), a hand grenade was found during ongoing harvesting work in an asparagus field in Lavelsloh. The finders alerted the police and fire department around 7 p.m.

“After the emergency services had consulted with the specialists from the explosive ordnance disposal service in Hanover, they classified the grenade as untransportable from a distance and decided on controlled detonation. For this purpose, the site on Mindener Strasse was cordoned off and cleared within a radius of 300 meters.

“With the support of the fire brigade and other police forces from the riot police, residential buildings in the radius were evacuated.

“A total of 23 people had to leave their homes for the duration of the measures. Despite the late time, those affected showed understanding for the security measures taken by the emergency services. The fire station in Diepenau was made available to them as a contact point.

“Shortly after 11 p.m., the all-clear was given: the British Type 36 hand grenade had been successfully detonated.

“The area of operation was released again by the police and the residents were able to return to their homes.

“In order to be able to inform the affected citizens about the current situation in a timely manner, the use of the social media was accompanied via the Twitter and Facebook channels of the Nienburg/Schaumburg Police Department.”

‘Mills bomb’ is the popular name for a series of British hand grenades that were the first modern fragmentation grenades used by the British Army.

They were patented, developed and manufactured by William Mills, a hand grenade designer from Sunderland.

They were manufactured at the Mills Munitions Factory in Birmingham in 1915 and were in service from that year until August 2021, when their last major operator, India, replaced them.

Filled with the explosive Baratol, they were still being used in combat as recently as 2004.

More than 75 million were produced.