Love Bug: Trilobites Had Extra Limbs To Hold Onto Partner During Mating

“There’s about 20,000 described trilobite species, but less than 40 species have preserved appendages.
By Darko Manevski May 16, 2022
Facebook
Twitter
Linkedin
Email 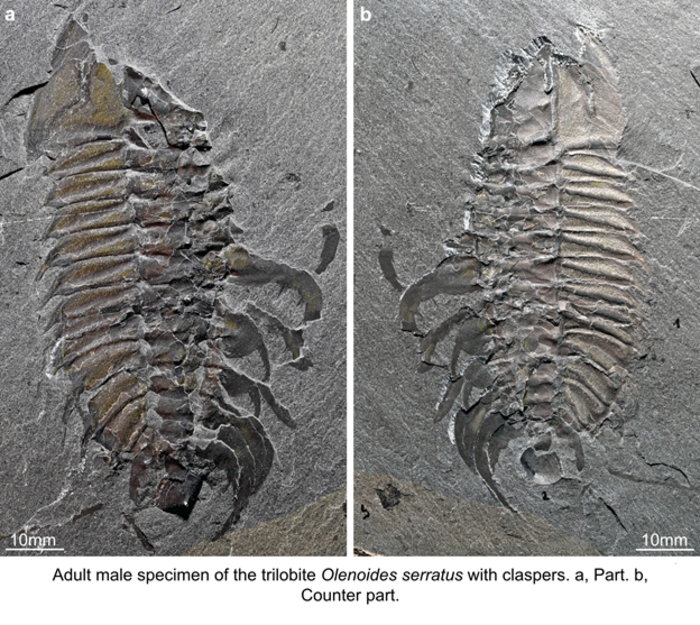 However, trilobite appendages and the anatomy of the underside of their body are typically not well preserved, which makes it difficult to infer their mating and reproductive behaviors.

Until now, modern arthropods have been heavily used as an analog to infer the mating behavior of trilobites, but a new study published Friday in Geology described the discovery of a specialized limb in a mature male trilobite species that sheds light on trilobite’s mating behaviors for the first time.

Detailed study of a fossil specimen of the trilobite species Olenoides serratus revealed two sets of peculiarly reduced appendages in the middle of its body. Each of these appendages is interpreted to be a clasper-like limb, which mature males would use to grasp females during mating to ensure that the male is in the best position for external fertilization of the eggs.

“Occasionally you will get fossil specimens that actually died and got preserved in the act of copulation, and there’s a couple of insects that are preserved during mating, but short of that, it’s hard to infer mating behaviors,” said Sarah Losso, lead author of the study. “There’s about 20,000 described trilobite species, but less than 40 species have preserved appendages. This is the first time that really significant appendage specialization is seen in trilobites. The discovery teaches us more about the behavior of trilobites and shows that this type of complex mating behavior already existed by the mid-Cambrian.”

The O. serratus fossil specimen is approximately 500 million years old from the Cambrian Period and was originally collected from the Burgess Shale in British Columbia, Canada, which is a world-renowned fossil deposit for its soft-bodied preservation of Cambrian organisms. The fossil specimen is currently housed at the Royal Ontario Museum in Toronto, Canada.

Losso systematically studied and photographed over 60 trilobite specimens from the Burgess Shale that had preserved appendages. The one specimen of O. serratus was the only one to display these uniquely specialized limbs. According to Losso, the fossil specimen is broken and is missing most of the exoskeleton that covers the head and half of the body, but the fact that it was broken helped them to see the clasper-like limbs, which otherwise would not have been visible and would have been completely concealed. Until now, this special clasper-like appendage was otherwise unknown for O. serratus or other trilobite species to date.

Horseshoe crabs are commonly used as modern analogs for trilobites given their similar appearance and lifestyles, and this special trilobite limb appears functionally similar to the claspers that male horseshoe crabs have and use to hold onto the spines of a female during external fertilization. While it was previously presumed that trilobites had mating behaviors similar to horseshoe crabs, this fossil discovery provides evidence for the similarities in their reproductive strategies based on their anatomical features.

“Trilobites and horseshoe crabs are not particularly closely related to each other, but they share a similar overall organization, and they live in similar marine environments. It’s a little bit like how a bat can fly and a bumblebee can fly. They both use wings, but the wings themselves are quite different in how they are made and how they work. This discovery suggests to some extent that if you are a helmet-looking marine animal that lives on the sediment, there are only so many ways you can effectively mate externally,” said Javier Ortega-Hernández, co-author of the study.

The discovery of this clasper-like limb in trilobites reveals that the complex mating behaviors that are observed in modern arthropods originated during the Cambrian Explosion over 500 million years ago. It is the earliest record of an appendage of this type used for reproduction and represents a degree of limb specialization for a non-feeding function.

“Traditionally, trilobites are looked at as examples of primitive animals. This discovery shows that they could actually display complex behaviors for reproduction, similar to what some of the animals that we have today are doing,” said Ortega-Hernández. “It is really contributing towards a better understanding of the Cambrian environment as actually being a thriving, ecologically complex system, rather than a lesser version of the biosphere we have today.”