The rare 900-year-old antique weapon, preserved in perfect condition, was used during the Crusades.
By Mary Gilbert May 13, 2022
Facebook
Twitter
Linkedin
Email 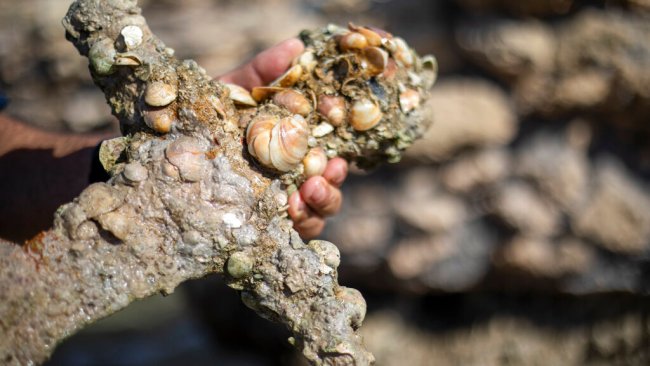 The Israel Antiquities Association determined the seashell-encrusted iron sword dates back to the Crusades. (AccuWeather)

If a scuba diver had to describe an ideal dive, it would likely involve stunning views of ocean ecosystems or an up-close look at diverse marine life.

Yet, on Oct. 16, 2021, an ordinary dive turned extraordinary for one Israeli scuba diver when he discovered a sword that experts believe spans centuries.

Diver Shlomi Katzin was exploring a portion of the Mediterranean Sea just off Israel’s Carmel beach, located south of Haifa, an Israeli port city. While on this expedition, Katzin came across a treasure trove of artifacts tucked into the seabed.

Katzin discovered stone and metal anchors and unearthed pottery fragments, but potentially the most stunning among the newfound treasures was a large, sea-life-encrusted sword. Fearing the newly unearthed sword would be buried again by the sea, or stolen, Katzin contacted the Israel Antiquities Authority (IAA) in Jerusalem.

Once the authority had an opportunity to analyze the sword, an astounding revelation came to light.

Experts with the IAA determined the weapon was about 900 years old, which would date back to the time of the Crusades, according to a statement posted to the organization’s Facebook page

“The sword, which has been preserved in perfect condition, is a beautiful and rare find and evidently belonged to a Crusader knight,” said Nir Distelfeld, an inspector for the IAA’s robbery prevention unit. “It’s exciting to encounter such a personal object, that takes you in your imagination 900 years back in time, to another period, of knights, armors and swords.”

The storm’s blade is believed to be made of iron and measures around 3.3 feet (40 inches) in length. Adding in the length of the hilt, the entire sword measures in at an impressive 4.5 feet (54 inches) long, according to NBC News.

The sword and the other artifacts were all discovered within the same 1,000-square-foot site, The New York Times reported. The IAA has been aware of this site since last June, when a storm shifted the sand enough to unearth some artifacts. However, the discovery of additional items on the site remains difficult, due to the continuous movement of the sand.

The Crusades were a series of religious wars fought between Christians and Muslims to take control of holy sites considered sacred to both groups. In all, eight major Crusade expeditions occurred between 1096 and 1291, according to History.com.

The IAA says the sword will be displayed to the public after it has been cleaned and further research has been conducted.