Holy Smoke: Batman Gets Jump Start From Cops After Batmobile Breaks Down

The amusing scene took place in the municipality of Biguacu, after the battery on the Caped Crusader’s Batmobile failed. 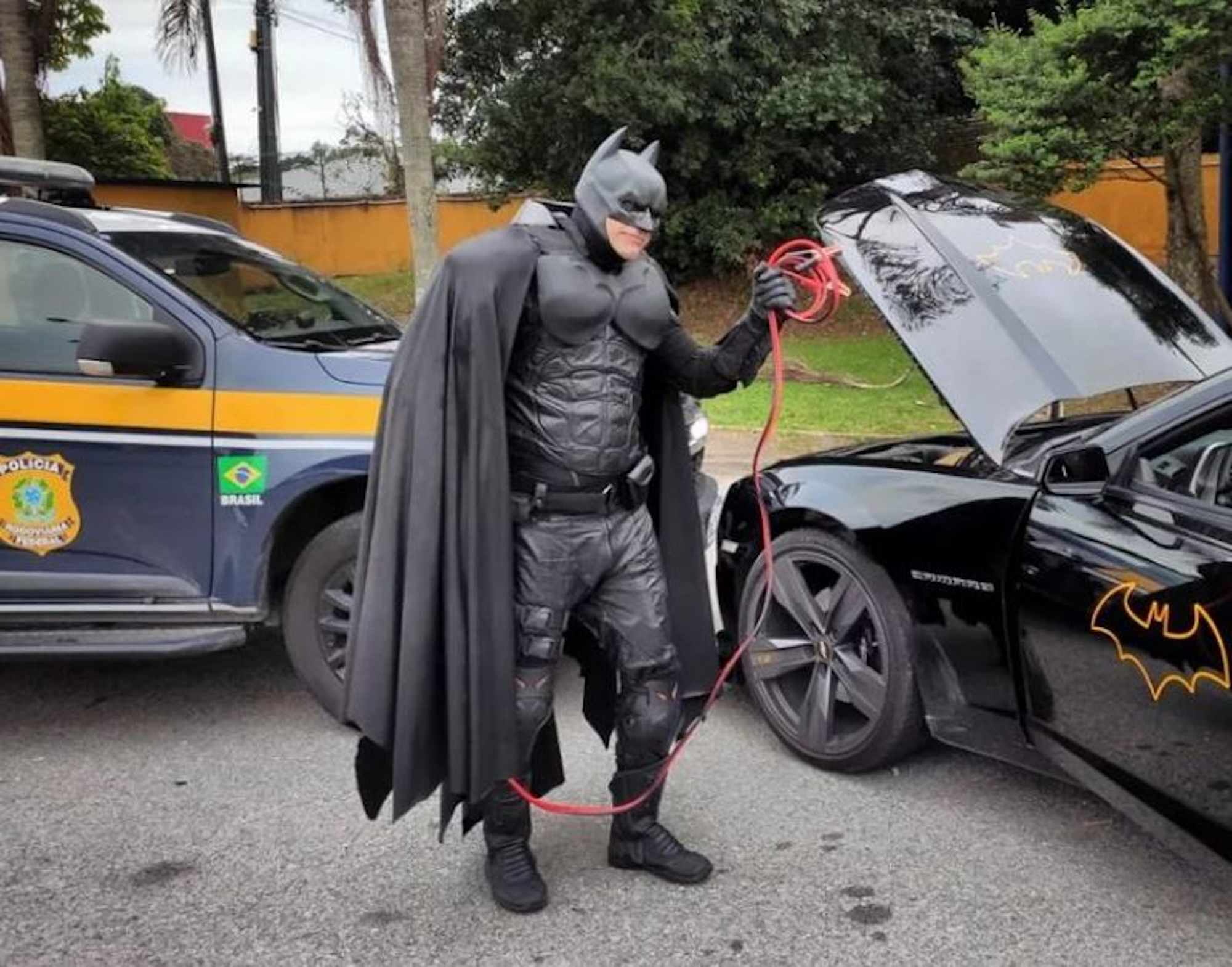 Renato Bilbao, a 54-year-old retiree who incorporates the superhero in volunteer work, charges the battery of the Batmobile ended up failing, in May, 2022, in Biguacu, Brazil. (PRF/Zenger)

This is the moment The Dark Knight gets a jump start from helpful cops after his Batmobile broke down on a crime-fighting mission.

The amusing scene took place in the municipality of Biguacu in the Brazilian state of Santa Catarina after the battery on the Caped Crusader’s Batmobile failed.

However, officers of the Federal Highway Police (PRF) assisted The Dark Knight after he conceivably made a call to long-time police acquaintance Commissioner Gordon.

According to the traffic police, the battery on his converted Chevrolet Camaro, owned by 54-year-old retiree Renato Bilbao, died while making a journey on the BR-101 highway.

The PRF gladly gave Batman a boost with jump cables and allowed him to continue on his way to an event in Sao Bento do Sul.

The real-life Bruce Wayne, who comes from the city of Florianopolis, regularly attends events in daycare centers, hospitals and orphanages in the region,

He quit his job as an electrician four years ago and decided to volunteer his Batman services at local institutions and centers.

Bilbao, who says he is a big fan of the 1960s ‘Batman’ TV series, explained: “As I already had the mask and the car, it was an easy transition.”

Although Batman broke down on the BR-101 on 6th May, local media reported on the mishap this week.

It is unclear if Bilbao’s Batmobile is working well after the jump start, or whether he will need to pop the Batmobile into a local mechanic’s to undergo a service.

Batman who first appeared in the comic book Detective Comics in 1939 is part of the DC universe and is the alias of American billionaire playboy Bruce Wayne.

He becomes Batman after using his wealth to create high-tech crime-fighting devices including the Batmobile although the character together with his sidekick Robin took a lighter tone in the 1960s series that inspired Renato Bilbao.

The 1960s series with its comic book style action scenes starred Adam West as Batman and later actors that played the superhero included Michael Keaton in 1989 and Christian Bale in the dark Knight trilogy between 2005 and 2012. In 2016 Ben Affleck stepped into the role of the caped crusader, and then Robert Pattinson in 2022.

After the 1960s comical attitude to the star, the character returned to its darker roots more recently, notably with The Dark Knight Returns.

Batman is one of the most popular comic book characters of all time and also the most commercially successful. The licenses to use the image of the character have been using everything from Lego to computer games and numerous movies and TV series.