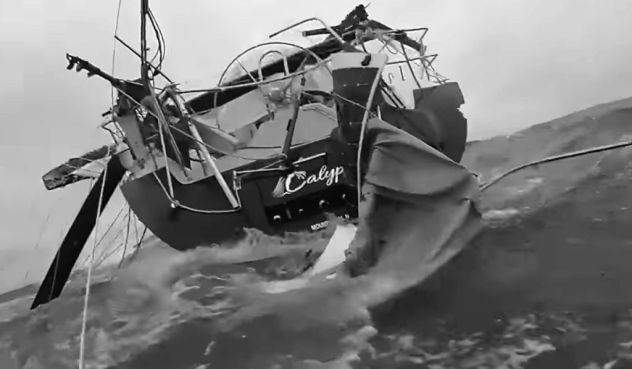 The U.S. Coast Guard rescued the four crew members from the damaged sailing vessel Calypso in the Atlantic Ocean on May 8, 2022, about 100 miles south of the Long Island Sound. (U.S. Coast Guard)

A four-man sailing crew suffering from injuries and near hypothermia was rescued by the U.S. Coast Guard after a “rogue wave” in the Atlantic Ocean thrashed and tossed about their 39-foot sailboat.

Images of the incident show a Coast Guard rescue team hoisting the stranded boaters into a helicopter over rough waters about 100 miles south of Montauk, Long Island, on May 8.

The men were sailing from Bermuda bound for Connecticut when they encountered the “heavy sea conditions,” the Coast Guard said. Their sailboat, named the Calypso, was left in tatters.

“Rogue waves” occur when a wave is proportionally larger than those around it in a given area of the ocean. They occur in open water and grow more than double the height of neighboring waves.

The Calypso crew members were close to “experiencing symptoms of hypothermia,” said Petty Officer Emma Fliszar with the Boston-based Coast Guard First District. She described the sea conditions at the time as treacherous with 16- to 17-foot waves and nearly 40-mph winds.

The rough conditions were caused by a large weather system that had remained stalled off the Atlantic coast since the early weekend, according to AccuWeather meteorologists. The storm brought stiff winds and rough surf with it prior to shifting south.

The Calypso and its crew were only able to call for help via text and an EPIRB (Emergency Position Indicating Radio Beacon). They apparently worked, and the Coast Guard was dispatched around 4 p.m. on May 8 after receiving an emergency call from a sailing vessel in distress, Fliszar said.

Such “heavy weather” conditions, she noted, are enough for the Coast Guard to take extra precautionary measures.

With the evacuation complete, one of the people rescued can be seen at the end of the video giving a wave and a smile as he’s lifted up into the helicopter.

The men were then flown to Gabreski Airport on Long Island, where they were transported to an area hospital with a “higher level of care” for further evaluation, the Coast Guard said.