The evidence confirms that human activity took place in North America 23,000 years ago. 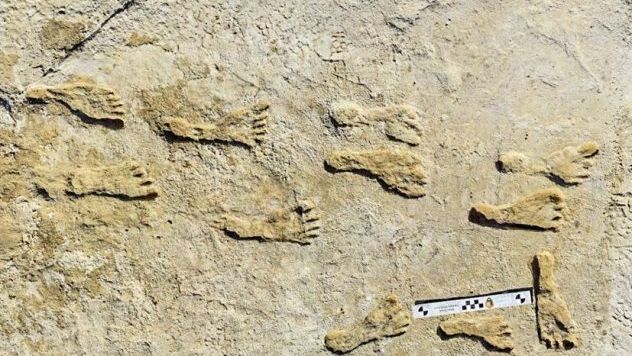 Footprints can tell a remarkable story.

The unearthed footprints, discovered in 2009 and the subject of a study released in late September 2021, have upended archeologists’ understanding of early life in North America. They are being described as “unequivocal evidence” that human activity took place in the Americas long before conventional wisdom.

For decades, it’s been generally believed that humans first entered North America between 13,000 and 16,000 years ago — after the melting of the North American ice sheets opened up migration routes. These new findings, published in the journal Science, place human habitation in the Americas during the Last Glacial Maximum, a time when ice sheets covered much of North America and as much as 10,000 years earlier than evidence has so far suggested.

“This is probably the biggest discovery about the peopling of America in 100 years,” said Ciprian Ardelean, an archeologist at Autonomous University of Zacatecas in Mexico, according to The New York Times.

Archeologists debate when humans first arrived in the Americas; it changes depending on evidence excavated. Most recently, a team of researchers, led by Matthew Bennett, a geographer from Bournemouth University in England, has determined a set of ancient human footprints in White Sands National Park are the earliest evidence of human activity in the Americas.

The footprints were first discovered in 2009 by David Bustos, the park’s resource program manager. Over the years, he has brought in teams of scientists to help understand them.

Researchers said the footprints were made over a period of 2,000 years as people walked across soft mud at the edge of a shallow lake, which is part of the modern-day Alkali Flat in White Sands. As time passed, sediments, including grass seeds called ditch grass, an aquatic plant, filled in the prints and the ground hardened. More recently, erosion has caused the footprints to re-emerge.

Normally, rock layers are “a nightmare” to date, Bennett said. But two years ago, Bustos, an archeologist and study co-author, discovered the ditch grass seeds commingling within the sediment layers above and below the footprints and realized he could carbon date the seeds.

The dates range in age and confirm human presence over at least two millennia with the oldest tracks dating from around 23,000 years ago, which corresponds to the height of the last glacial cycle. That makes the prints the oldest known human footprints in the Americas.

Reynolds told The Daily Mail that because researchers know the White Sands prints were made by Homo sapiens: “We can then compare the fossil foot size data and make an estimate based on the modern human ages for similar foot sizes.”

The research team believes the tracks belonged to numerous people, mostly children and teenagers, with some tracks left by adults. They also discovered tracks from mammoths, giant ground sloths and dire wolves.

The footprints found at White Sands are referred to as “ghost tracks,” since they only appear under certain lighting and moisture conditions.

“The footprints left at White Sands give a picture of what was taking place, teenagers interacting with younger children and adults,” Bennett said, according to the Cornell Chronicle. “We can think of our ancestors as quite functional, hunting and surviving, but what we see here is also activity of play, and of different ages coming together … A true insight into these early people.”

“The children tend to be more energetic,” said Sally Reynolds, a paleontologist at Bournemouth University in England and a co-author of the study, told the Times. “They’re a lot more playful, jumping up and down.”

Dan Odess, a science adviser for the National Park Service and another of the study’s authors, said the discovery at White Sands provides the first “unequivocal evidence” for human presence in the Americas during the Last Glacial Maximum.

“Not all archeological sites contain such unequivocal evidence. One reason why this discovery is important — it makes the idea that other purportedly ancient sites are evidence for human presence that much more plausible, even if the evidence they contain is less unequivocal,” Odess said. “This doesn’t mean all of those sites are legitimate, but it means they cannot be dismissed out of hand.”