VIDEO: Rocket Scam: Russian Fighter Takes Off On Sortie And Comes Back With Missiles Unused

Zenger news obtained the film from the Ministry of Defence (MoD) of the Russian Federation on Tuesday, May 10.
By William McGee May 12, 2022
Facebook
Twitter
Linkedin
Email 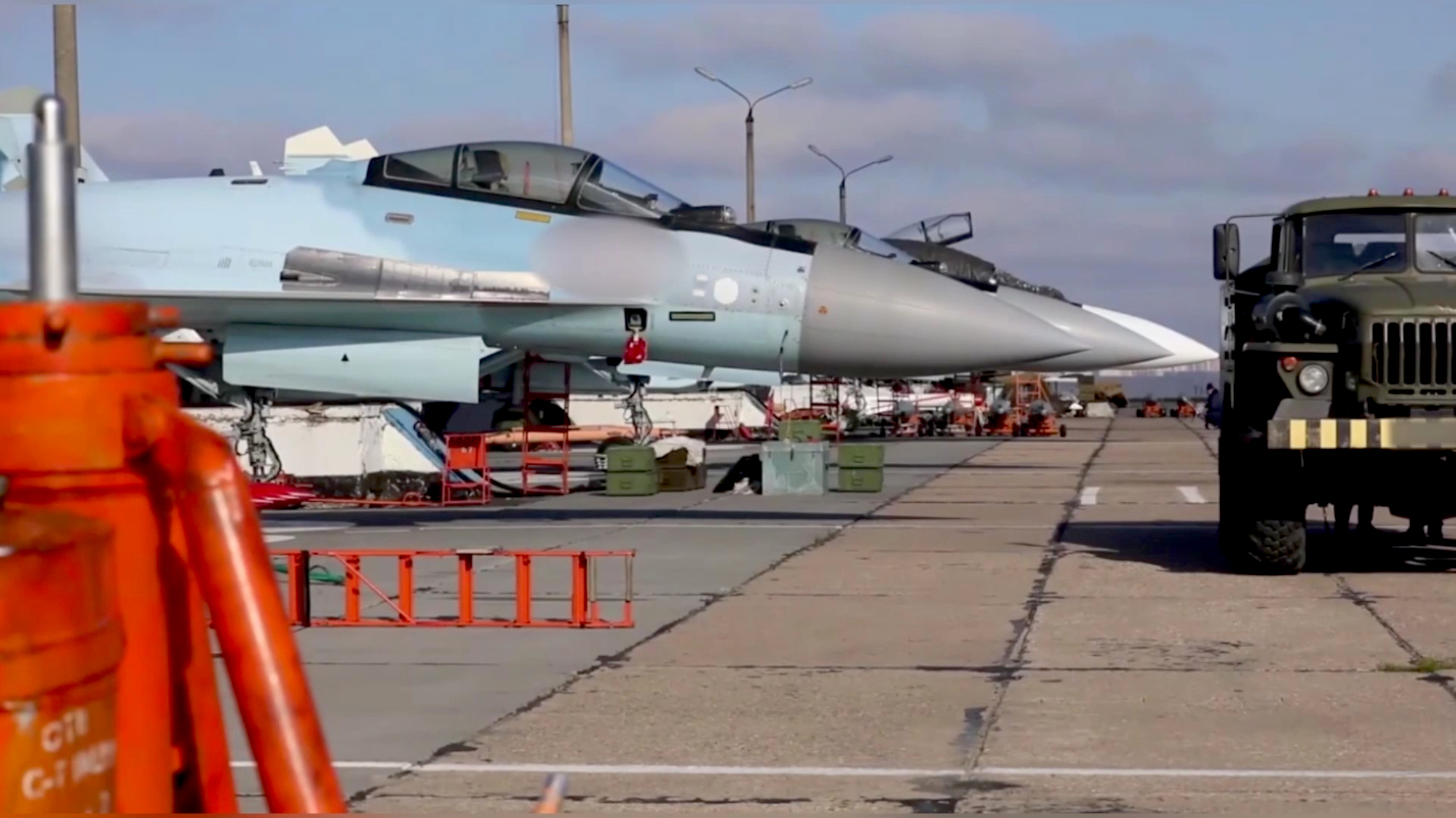 Description: The Russian Defense Ministry published footage of combat sorties of Su-35S multirole fighters during a special operation to defend Donbass, Ukraine, destroying the military infrastructure of the Armed Forces of Ukraine in May, 2022. (Ministry of Defence of the Russian Federation/Zenger)

Kremlin propaganda chiefs have issued a baffling video showing a Russian fighter jet being armed to the teeth before taking off on a sortie – but returning with all its missiles seemingly intact.

The glossy movie-quality production shows the fully loaded Sukhoi Su-35S soaring into the clouds on a “combat sortie”.

But the footage apparently shows the same warplane returning to base without having fired the clearly visible munitions.

Zenger news obtained the film from the Ministry of Defence (MoD) of the Russian Federation yesterday (Tuesday, May 10).

The Russian MoD titled it (in English): “Footage of combat sorties of multifunctional super-maneuverable Su-35S fighters for the destruction of military facilities of the Armed Forces of Ukraine”.

The Sukhoi Su-35S is designed by the Sukhoi Design Bureau and built by the Komsomolsk-on-Amur Aircraft Plant.

Russia invaded Ukraine on February 24 in what the Kremlin is now calling a “special military operation” to “protect Donbass”. The invasion is now on its 77th day.

In its latest briefing (yesterday), the Russian MoD said (in English): “The Armed Forces of the Russian Federation continue the special military operation in Ukraine.

“During the day, operational-tactical and army aviation have hit 74 assets, including 2 command posts, 20 areas of AFU manpower and military equipment concentration, as well as 2 missile and artillery weapon depots.

“The attacks have resulted in the elimination of more than 100 nationalists and up to 19 armored and motor vehicles.

“Russian air defense means have shot down 1 Ukrainian Su-25 aircraft near Shirokoe, Dnepropetrovsk Region. In addition, 1 Mi-8 helicopter of the Ukrainian Air Force has been shot down near Novodmitrovka, Kherson Region.

“In addition, 4 Ukrainian unmanned aerial vehicles have been shot down near Lysychansk, Kryvyi Rih, and Kulinovka, Kharkiv Region.

“I would like to point out that another Ukrainian Bayraktar-TB2 unmanned aerial vehicle has been shot down by Russian air defense means this afternoon near Snake Island.

“The Kyiv regime has thus lost 30 military UAVs alone in this area over the past three days.

“9 of these, I remind you, are Bayraktar-TB2 strike UAVs.

“The UAVs were all used in the failed ‘PR campaign’ by the Kyiv regime to seize Snake Island on the eve of May 9, the Great Patriotic War Victory Day.

“In addition, 3 more bodies of Ukrainian saboteurs nailed from the sea were found by Russian servicemen on the shore today.

“Now 27 bodies of Ukrainian special forces and nationalist fighters remain at Snake Island as a result of Kyiv’s failed operation.

“In total, the Kyiv regime have lost 3 Su-24 bombers and 1 Su-27 fighter jet near Snake Island during militarily pointless attempt to seize the island.

“Also 3 Ukrainian Centaur armored amphibious assault boats with marines on board have been destroyed.

“Thus, this adventure ended in disaster for Ukraine. The Kyiv regime’s mindless PR campaign to seize Snake Island on the eve of Victory Day resulted in the senseless deaths of more than five dozen Ukrainian fighters and members of elite AFU units, the loss of 4 aircraft, 10 helicopters, 3 boats, and 30 unmanned aerial vehicles.”