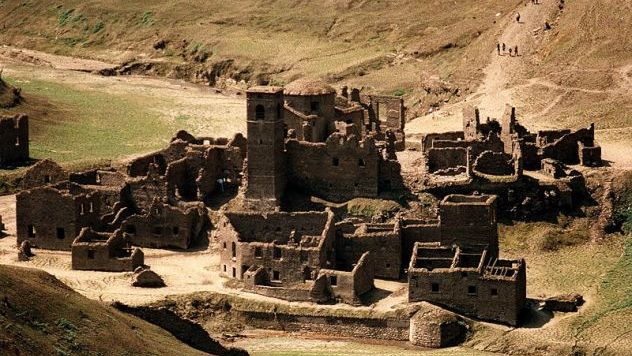 Every few decades or so, the submerged 12th-century Italian village Fabbriche di Careggine in the Lucca province of Tuscany breaches the surface of Lake Vagli. It's shown here during one such emergence, in 1994. (Wikimedia Commons/Robyfra1)

After more than 70 years underwater, one of Italy’s submerged cities has resurfaced.

The lost Italian village of Curon, in northern Italy near the borders with Switzerland and Liechtenstein, recently emerged from under Lake Resia.

A lone 14th-century church tower rising from the middle of a lake was the only indication that a small city, once home to 900 people who lived in 160 homes, ever existed.

The village was flooded for a hydroelectric plant and part of the merger of two nearby lakes, back in 1950, according to the BBC.

Curon had been part of Austria until 1919, therefore, many of the residents were unable to speak Italian and were ill-equipped to fight the plan to unite the two lakes: Resia and Curon. Their homes were eventually submerged for the sake of producing hydroelectric energy.

Azzolini’s footage shows local residents walking around the remains of Curon’s homes. Some structures date back to the 14th century, according to reports.

There are only a couple more weeks until Curon is resubmerged, as the power company that owns the dam will slowly refill the lake. The village of Curon Ventosa, which overlooks the submerged town, has about 2,500 residents. It was formed after the original town was lost.

The lost village of Curon is not the only city to be claimed by a body of water. Many examples come from the ocean swallowing cities whole, akin to tales of the lost city of Atlantis.

“All the houses were destroyed, except for the church tower that is always visible,” Luisa Azzolini, a local resident who captured the footage, told Storyful.

In April, the remnants of what was left of the village appeared briefly when the lake was temporarily drained for repair work and maintenance on the reservoir after leaks were discovered.

Photos and videos of the abandoned village showing the ruins have been shared on social media.

Every few decades or so, the submerged 12th-century Italian village Fabbriche di Careggine in the Lucca province of Tuscany breaches the surface of Lake Vagli.

The community structures of the town — including stone homes, a bridge, the San Teodoro church and a cemetery — were still mostly preserved, even after being underwater for a long period of time.

Earthquakes seem to be common factors when looking at other submerged cities, such as Port Royal in Jamaica and Pavlopetri and Olous near Greece. In what is today’s Great Britain, Ravenser Odd and Dunwich were ravaged by large storms. The latter still has areas that remain above water, though it is not a highly populated town.

Today, the United States is seeing a handful of its coastal cities beginning to sink, including New Orleans, Houston, Miami and Virginia Beach.

A 2016 NASA study found that parts of New Orleans are sinking at a rate of 2 inches per year, and Virginia Beach is experiencing the fastest rate of sea-level rise on the East Coast, according to The Washington Post. Miami’s situation isn’t much better.

“Miami as we know it today — there’s virtually no scenario under which you can imagine it existing at the end of the century,” Jeff Goodell, author of “The Water Will Come: Rising Seas, Sinking Cities, and the Remaking of the Civilized World,” told Business Insider in a 2018 interview.

Groundwater pumping is contributing to the sinking of some of these cities, but civil engineers are also concerned about rising sea waters threatening these cities.

Civil engineers have been remedying rising sea levels through dams, levies and pumping the excess water out that the ground can’t absorb.

Ali Memari, a professor at Penn State’s College of Engineering, as well as head chair of the residential building construction and director of the Pennsylvania Housing Research Center, said elements like pavement contribute to the flooding, causing the excess water to overwhelm the drainage system.

Cities like these, Memari said, can fight the rising water — or learn to live with it with by employing sound engineering solutions. Fighting the sea levels would mean building sea walls and levees as well as building homes at higher elevations. Living with the rising sea levels could mean engineering cities, or at least the buildings, to float.