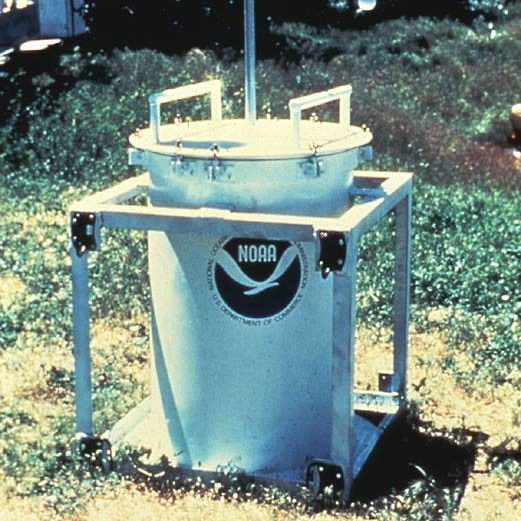 The blockbuster movie “Twister” influenced a generation of professional storm chasers and sparked curiosity about meteorology when it was released May 10, 1996.

“Twister” is set in rural Oklahoma and focuses on a TV meteorologist who gets roped into chasing storms. Co-stars Helen Hunt and Bill Paxton play a married couple on the verge of divorce. They put themselves in the path of violent severe weather in the name of science. Their performance not only entertained audiences and made hearts pound, but also inspired future scientists.

One of the movie’s characters was inspired by a technology meteorologists used in the 1970s. It never really took off — but storm chasers today say the tech was ahead of its time.

In the film, the meteorologists deployed Dorothy, a ground probe based on a real-life attempt to research tornadoes, in order to gain a better understanding of nature’s tempests. Researchers tried to place equipment in a tornado’s path to measure wind speed and other meteorological variables at ground level.

“TOTO, a 55-gallon drum that researchers attempted to place in the path of a tornado, inspired screenwriters Michael Crichton and Ann Marie Martin to develop the story that would become “Twister.”

Released 26 years ago, “Twister” remains an important part of NSSL history,” the National Oceanic and Atmospheric Administration (NOAA) National Severe Storms Laboratory (NSSL) said in a post on Facebook on the day of the film’s 25th anniversary. (TOTO stands for TOtable Tornado Observatory. Aptly named after Dorothy’s dog from the 1939 film “The Wizard of Oz,” begins with a tornado striking Kansas.)

Reed Timmer, a professional storm chaser for more than two decades, reminisced on the hit film’s 25th anniversary in 2021. He explained to AccuWeather how the film influenced both the storm-chasing industry at large and his career personally.

Timmer, who has worked for AccuWeather in various roles over the years, told Lincoln Riddle, a video producer for AccuWeather, he vividly remembers watching “Twister,” his all-time favorite movie, in theaters.

“I was in high school at the time. I had just turned 16.” Timmer had his driver’s license, and he already had a couple of storm chases under his belt, including chasing lake-effect snow and spring thunderstorms in Michigan.

Timmer said when he was a child he “was deeply afraid of thunder and lightning,” but that fear ended abruptly. “Then I woke up one morning — and it was like a light switch went off.”

And Timmer became obsessed with storms.

“Before watching “Twister,” I already knew this is what I wanted to do for the rest of my life and [the movie] only gave me that much more excitement and passion to follow my goal.

When “Twister” was released in theaters, Timmer was already passionate about storm chasing, but the hit film took his dream to another level.

“I was on a trajectory to become a storm chaser, and it only solidified that track,” he said. “Ever since I saw that movie, I was even more dedicated to devoting my entire life to chasing down storms,” Timmer said. “Here I am, 25 years later, still chasing down tornadoes.”

Timmer set out to chase down all manner of extreme weather. He even coined a phrase to end many storm updates: “Never stop chasing.”

In fact, he said the movie inspired an entire generation of meteorologists and storm chasers.

“When I got down to the University of Oklahoma my freshman year, there were dozens and dozens of students there. I think we had over 200 people in the freshmen class in meteorology, and many were inspired by the movie “Twister.” Many of the meteorologists and storm chasers going strong today were inspired by that movie,” Timmer said.

Researchers first attempted to gather data from tornadoes in the 1970s, with the aim of trying to improve the understanding of tornadoes to better warn the public, according to the NSSL.

Dr. Al Bedard and Carl Ramzy were the scientists from the NOAA Environmental Research Library, the predecessor to NSSL, who created TOTO. The device was designed to measure and record the data gathered by anemometers, instruments used to measure wind speed and direction, pressure sensors and humidity sensors.

Led by Howard Bluestein from the University of Oklahoma and NSSL, groups attempted to deploy TOTO squarely in tornadoes’ tracks. A direct hit never happened. Its closest encounter was in 1984, when it was knocked over by the edge of a weak tornado. The device was retired in 1987.

“Twister” adapted that concept with the idea of Dorothy, a large barrel that sent hundreds of live-streaming sensors into the tornado, lofted by the tornadic winds. The device in the movie was deployed in the path of a tornado and launched sensors that live-streamed data and provided a 3-D X-ray of the tornado inside.

A version of Dorothy and its competitor, D.O.T.3 are on display at the NWS office in Norman, Oklahoma.

The 1996 film was “definitely ahead of its time in terms of the actual science that we could do around tornadoes,” Timmer said. Now, more than two decades later, meteorologists and storm chasers are launching rockets and live-streaming sensors in tornadoes.

The movie actually helped inspire tornado science, Timmer said. He explained that in recent years, researchers have been able to design live-streaming sensors. Meteorologists are able to view data as the probes are launched inside a tornado.

These feats were performed similarly to the hit movie that debuted more than two decades ago.

“[In 2019] we launched sensors into a tornado by model rocket, and they were able to stream that live data back to the Dominator 3, our armored vehicle, as we intercepted that tornado,” Timmer said.

One of those sensors was lofted over 30 miles away from Timmer’s location at speeds of up to 190 miles per hour. That interception in May 2019 gave him and fellow researchers the first look, in real-time, at just how strong a violent tornado was as it charged across northeastern Kansas, heading toward Kansas City.

In 2022, Timmer’s drone video of the Andover tornado was analyzed to detect debris spinning around the tornado, reminiscent of the scene in the movie where the sensors in Dorothy go airborne.

Each one of these tracks is a piece of Debris from the original high-res version of @ReedTimmerAccu‘s video of the Andover, KS Tornado. “Dashed” tracks indicate a flat object rotating (gaps in the track are where it’s edge on to the drone) pic.twitter.com/wuJEae1mRu

“Our science mission with the Dominators was inspired, in part, by the movie “Twister” and the Dorothy probe that was deployed in the path of that tornado,” he said.

Timmer’s Dominator is an armored storm-chasing vehicle that’s designed to get inside, if not up close, to tornadoes. The purpose of the Dominator is to collect data inside of supercell storms that cannot safely be collected from a regular vehicle.

Since Timmer has chased down hundreds of tornadoes — and has even had his share of up-close encounters with twisters in real life, including a massive wedge tornado in Wray, Colorado, that generated viral video footage five years ago — he can weigh in on whether the film’s portrayal of being inside a tornado was accurate.

“It definitely is different inside of a real tornado than [what] was depicted inside of the movie ‘Twister,'” Timmer said. One reason the tornadoes in the movie were not the best representation of a real tornado could be that the filmmakers used a Boeing 707 plane engine to generate wind in some scenes, he said.

Timmer said intercepting a tornado in real life is more terrifying even than the movie depicted.

“It’s a lot less beautiful in there. The tornado doesn’t really have a well-defined eye in the middle of it. It’s turbulent. You have subvortices that are rotating around in those multiple vortex tornadoes,” Timmer said.

Timmer said that inside a tornado he saw dust and spray flying around everywhere, as well as condensation. Plus, it can be a bit painful, he said.

“Being inside a tornado is almost like a massive rotating fog bank, and you have massive pressure falls inside a tornado. So your eardrums are blowing out, your ears are popping, and it definitely is absolutely terrifying,” Timmer said, adding the film didn’t quite capture that.

The movie’s popularity shows no signs of waning, even a quarter-century after its release. In 2019, AccuWeather ran an informal poll aimed at identifying the greatest weather movie ever. Twister won in the final round as 75 percent of AccuWeather readers who took part chose it over “The Perfect Storm.”