"I’m hungrier," Charlo says. "I’m going to have him hurting and crying. I want to knock this guy out."
By Lem Satterfield May 11, 2022
Facebook
Twitter
Linkedin
Email 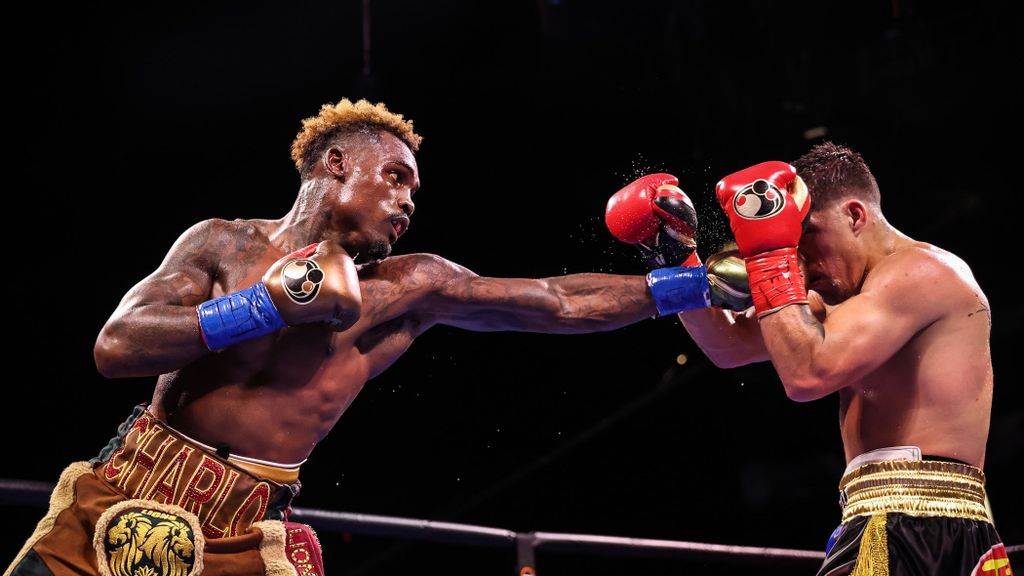 Jermell Charlo (left) rocked but couldn't finish Brian Castaño (right) in the second round of their 154-pound unification draw in July 2021. They'll rematch on Saturday with Charlo holding the IBF/WBA/WBC crowns, and Castano, the WBO version. (Premier Boxing Champions)

Jermell Charlo wants to have a knockout anniversary.

So the fighter known as “Iron Man” aims to give himself an early birthday present on Saturday by stopping Brian Castaño in a 154-pound undisputed unification rematch at Dignity Health Sports Park in Carson, Calif.

“This is one of the achievements a fighter can have — to fight to be undisputed,” said Charlo, who turns 32 on May 19. “I’m going to enjoy this moment, and I’m going to have fun when I’m in there on May 14, five days before my birthday.”

Charlo now holds the IBF/WBA/WBC crowns, and Castaño the WBO version entering a clash that could produce the first four-belt unification champion in the history of the 154-pound division.

“I’m locked in a little bit differently this time. I’m more dedicated than I’ve ever been. I’m hungrier. I’m going to have him hurt and crying,” Charlo said. “I want to knock this guy out. This is the Jermell from earlier, back when I was trying to end fights. I want to be that guy for 12 rounds now.”

Their return bout was postponed from March 19 after Castaño suffered a torn right biceps muscle during training camp.

“I was having back spasms (in his preparation for the last fight),” said Charlo, whose boxer-puncher approach rivals Castano’s pressure-brawler style. “I’m glad that God gave me the opportunity to face the same guy and just put on a better performance.”

“I’m proud of what I’ve done in the division,” said Charlo, who is 6-1-1 (5 KOs) in title fights, 4-1 (3 KOs) against champions, and 3-0 (1 KO) against title challengers. “Once the story is written and the book is finished, everyone’s going to come back and say that Jermell Charlo did a really good job at 154, but I have to get Castaño out of the way.”

Charlo looks to add defeating Castaño to an impressive resume that includes a sixth-round TKO of Joachim Alcine (October 2015) among the four champions he has vanquished along with southpaw Austin Trout (majority decision), Tony Harrison (11th-round KO) and Jeison Rosario (sixth-round KO).

“I make all of my former opponents somebody,” Charlo said. “Tony Harrison, Lubin, all these fighters who fought me before. Nobody knew who Brian Castaño was before I fought him.”

“Castaño is a hungry fighter who wants to accomplish the American dream, so this could be the most difficult fight in Jermell Charlo’s career,” said trainer Derrick James.

“But we’ll see what happens to Castaño’s hunger when Jermell gets into his rhythm, figures him out and begins to capitalize on his opportunities. In the end, I see Jermell winning impressively.”

But Castaño is likely equally motivated to erase all doubt that he’s the world’s premier 154-pound champion.

Castaño survived being dropped in the second round of an interim title-winning two-knockdown, sixth-round KO of Emmanuel de Jesus in November 2016, He defended the title by split-decision over Michel Soro in July 2017.

In 2019, Castaño fought to a draw with left-handed former champion Brian Lara in March before stopping veteran Wale Omotoso in November of that year for the first time in the latter’s career by fifth-round TKO.

“Charlo knows that he is going to have his hands full and that I won the first fight. I like to do my talking inside the ring. I’m a warrior. I’m going to be ready for whatever comes my way. I want the knockout. I need it and I crave it,” said Castaño, 32.

“That’s my chance to redeem myself and prove that I should have won the first fight outright. I went into his home state and turned the crowd against him. I want the respect that I am warranted and should be given from him. The first fight was a close fight, but the second fight is going to be even worse for him because I’m knocking him out.”

“Everybody wants to know how the rematch will be different. I’m considered a puncher and a boxer, and I’m planning to bring some tricks out of the hat this time,” Charlo said. “I hate that I didn’t close out the first fight the way I should have. I’m going to be better, faster, stronger and more relentless in this fight. I’m going to be the old school Jermell Charlo.”

At his best, Charlo is a tremendous finisher as evidenced by his fights with John Jackson, Charles Hatley, Erickson Lubin, Miguel Cota, Rosario and the return bout with Harrison.

Trailing on all three judges’ cards (69-64) against Jackson, Charlo staggered the fighter known as “Dah Rock” with a right to the temple and followed with two punishing lefts as his rival turned away to adjust his mouthpiece. The referee waved an end to the bout with a defenseless Jackson slumped against a corner turnbuckle.

Charlo finished Lubin in 2:41 with a right uppercut that sent him crashing to the canvas on his left leg. Lubin then toppled to his right side, his left arm and leg flailing as the referee halted matters.

Harrison was floored once in the second and twice in the 11th, the final time following a brutal nine-punch, five-second sequence comprising seven, head-swiveling left uppercuts and a pair of right hands.

Harrison rose only to be pinned against the ropes and bludgeoned by another relentless 10-punch combination over a six-second span as the referee stepped in to rescue him.

In their last fight, Charlo wobbled but didn’t finish Castaño in the first round, chasing the staggered Argentine around the ring. Castaño pinned Charlo against the ropes and nearly finished him in the second round, even as “The Iron Man” hurt the Argentine once each in the 10th and 11th.

“I could have done better by not being on the ropes, but who got hurt more? Who got buckled?” said Charlo, who, with IBF/WBA/WBC welterweight champion Errol Spence (28-0, 22 KOs), is a unified titleholder trained by James.

“Castaño didn’t throw as many punches as he usually does against me. Why? Because he got hurt. The fight would have ended if he had thrown more punches. I’m going to smash him this time around.”