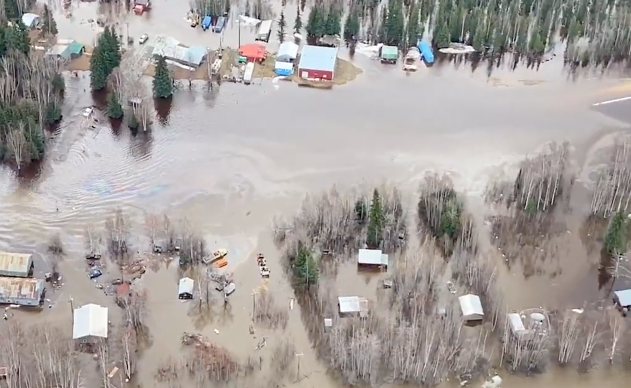 NWS staff flew with Civil Air Patrol on May 8 to check on the status of the ice jam roughly 12 miles downriver. The ice jam had broken up shortly before they arrived. This is a still from a video they took when the water levels at Manley Hot Springs were cresting. (Twitter/@NWSFairbanks)

An ice jam about 10 miles down the Tanana River in Alaska has caused flooding in the village of Manley Hot Springs, west of Fairbanks. A flood warning was issued by the National Weather Service on Saturday as the ice jam formed on the river.

Water levels continued to rise as ice flowed up through the slough bank, flooding the village. Floodwaters at the village rose to about 1 foot deep, according to KTUU. Power was shut off at Manley Hot Springs amid the flooding.

An ice jam is caused when snow and ice melt in the springtime at a rapid rate, usually due to warm conditions. Heavy rain can exacerbate the problem. As the snow and ice melt, the extra water causes frozen rivers and streams to swell up, breaking the layer of ice on top of the river. These large chunks of ice begin to flow downstream and can get stuck in a narrow passage of the river, causing an ice jam.

Alaska governor Mike Dunleavy declared a disaster emergency Saturday night for the Yukon Koyukuk Regional Education Attendance Area as a result of the ice jam flooding in Manley Hot Springs. Dunleavy said the declaration directs all State of Alaska agencies to respond to the flooding.

Almost all roads in Manley were flooded, and several houses on the slough bank were surrounded by water, according to the flood warning issued Sunday. The flooding started when a pinch point occurred where the ice was jammed, causing water to back up along the Tanana River and into the village.

Fairbanks National Weather Service Observation Program leader Craig Eckert said this flood is the second-worst flooding event ever recorded in the area, with the record flood occurring in 1956.

More than 50 residents have been moved to higher ground, according to the Alaska Division of Homeland Security and Emergency Management.

“The State Emergency Operations Center is staffed and is responding to flooding in Manley Hot Springs. An interagency team including the Tanana Chiefs Conference, Alaska State Troopers, Civil Air Patrol, National Weather Service and others are engaged,” the department said in a Facebook post.

The flood warning was originally in effect until Sunday evening but was extended to Monday evening. As of Sunday afternoon, many structures in Manley Hot Springs were still being impacted by high water levels, according to the National Weather Service in Fairbanks.

The ice jam released late Sunday morning and water levels began falling later in the day, but the situation is still affecting much of the community. An updated flood warning Monday morning said the flood will gradually recede through Monday afternoon, but some low-lying areas could still have standing water into the upcoming week.