Hidden treasures were discovered when the museum’s Assistant Director Jack Ashby was researching a book on Australian mammals. 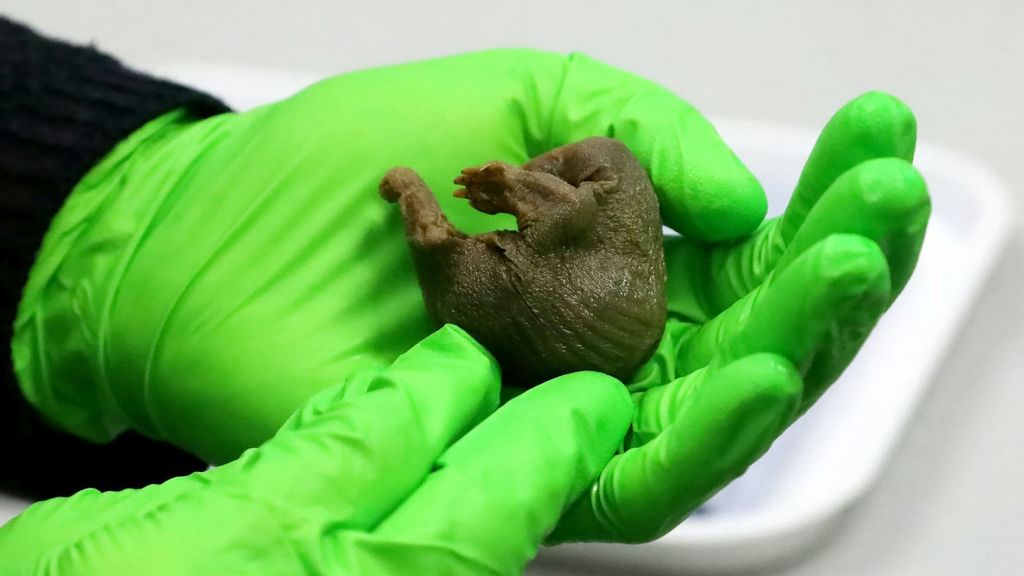 Jars of tiny platypuses and echidnas dating back 150 years which provided crucial evidence to support the theory of evolution have been rediscovered deep in the stores of a university museum. (Steve Chatterley/Zenger)

Jars of tiny platypuses and echidnas dating back 150 years which provided crucial evidence to support the theory of evolution have been rediscovered deep in the stores of a university museum.

The unique items, collected by scientist William Caldwell, had never been cataloged by the Cambridge University Museum of Zoology until now, and staff had been completely unaware of their existence.

When they were discovered in Victorian times, the specimens provided concrete evidence that some mammals lay eggs, a fact that supported Charles Darwin’s theory of evolution which had previously been hotly debated.

Religious and conservative scientists had been reluctant to accept mammals lay eggs until the breakthrough discovery was made.

The hidden treasures were only discovered when the museum’s Assistant Director Jack Ashby was researching a book on Australian mammals.

He suspected Mr. Caldwell’s collection might be at the museum and was later proved right.

He said: “It’s one thing to read the 19th Century announcements that platypuses and echidnas actually lay eggs.

“But to have the physical specimens here, tying us back to that discovery almost 150 years ago, is pretty amazing.

“I knew from experience that there isn’t a natural history collection on Earth that actually has a comprehensive catalog of everything in it, and I suspected that Caldwell’s specimens really ought to be here.”

Three months after Mr. Ashby asked Collections Manager Mathew Lowe to keep an eye out, a small box of specimens was found in the museum with a note suggesting they were Mr. Caldwell’s.

Mr. Ashby’s investigations confirmed this was indeed the case.

Until Europeans first came across platypuses and echidnas, which are sometimes called spiny anteaters, in the 1790s, it had been believed that all mammals give birth to live young.

The question of whether mammals can lay eggs became one of the most hotly-contested questions of the nineteenth century, which was fiercely debated by scientists.

Mr. Ashby added: “In the nineteenth century, many conservative scientists didn’t want to believe that an egg-laying mammal could exist, because this would support the theory of evolution – the idea that one animal group was capable of changing into another.

“Lizards and frogs lay eggs, so the idea of a mammal laying eggs was dismissed by many people – I think they felt it was degrading to be related to animals that they considered ‘lower’ life forms.”

The collection contains echidnas, platypuses and marsupials at different stages of life from fertilized egg to adolescence.

Mr. Caldwell was the first person to make complete collections of the species at every stage of their lives.

In the 85 years before the discovery, European scientists searched in vain for proof that platypuses and echidnas lay eggs.

They even trekked all the way to Australia to ask Aboriginals, but any results they sent home were dismissed or ignored.

William Caldwell was sent to Australia in 1883 with backing from the Government, Royal Society and Cambridge University to try and resolve the long-standing mystery.

After an extensive search, he managed to collect 1,400 specimens with the help of a large group of Aboriginal Australians.

This was the definitive proof he had been looking for, and the colonial scientific establishment were only able to accept the finding now it had been confirmed by “one of their own.”

Mr. Ashby says that during the last two centuries, scientists have “consistently belittled” Australian mammals by marking them out as strange and inferior.

He says this language still affects how we describe them today and undermines efforts to conserve them.

Mr. Ashby said: “Platypuses and echidnas are not weird, primitive animals – as many historic accounts depict them – they are as evolved as anything else. It’s just that they’ve never stopped laying eggs.

“I think they’re absolutely amazing and definitely worth valuing.”

Echidnas are the most widespread mammal in Australia.

They live all over the continent and have adapted to survive everywhere from the driest deserts to snow-capped mountains.

With a tail like a beaver, a flat bill, and webbed feet like a duck, the specimens were widely thought to be fakes that had been sewn together when they first arrived in Europe.

Both creatures have a unique combination of traits that nineteenth-century scientists thought should only exist individually in either mammals, reptiles or birds.

This made them central to debates around evolution.