The books are now going under the hammer this summer and are expected to fetch between 2,000 and 5,000 dollars.
By Anamarija Brnjarchevska May 11, 2022
Facebook
Twitter
Linkedin
Email 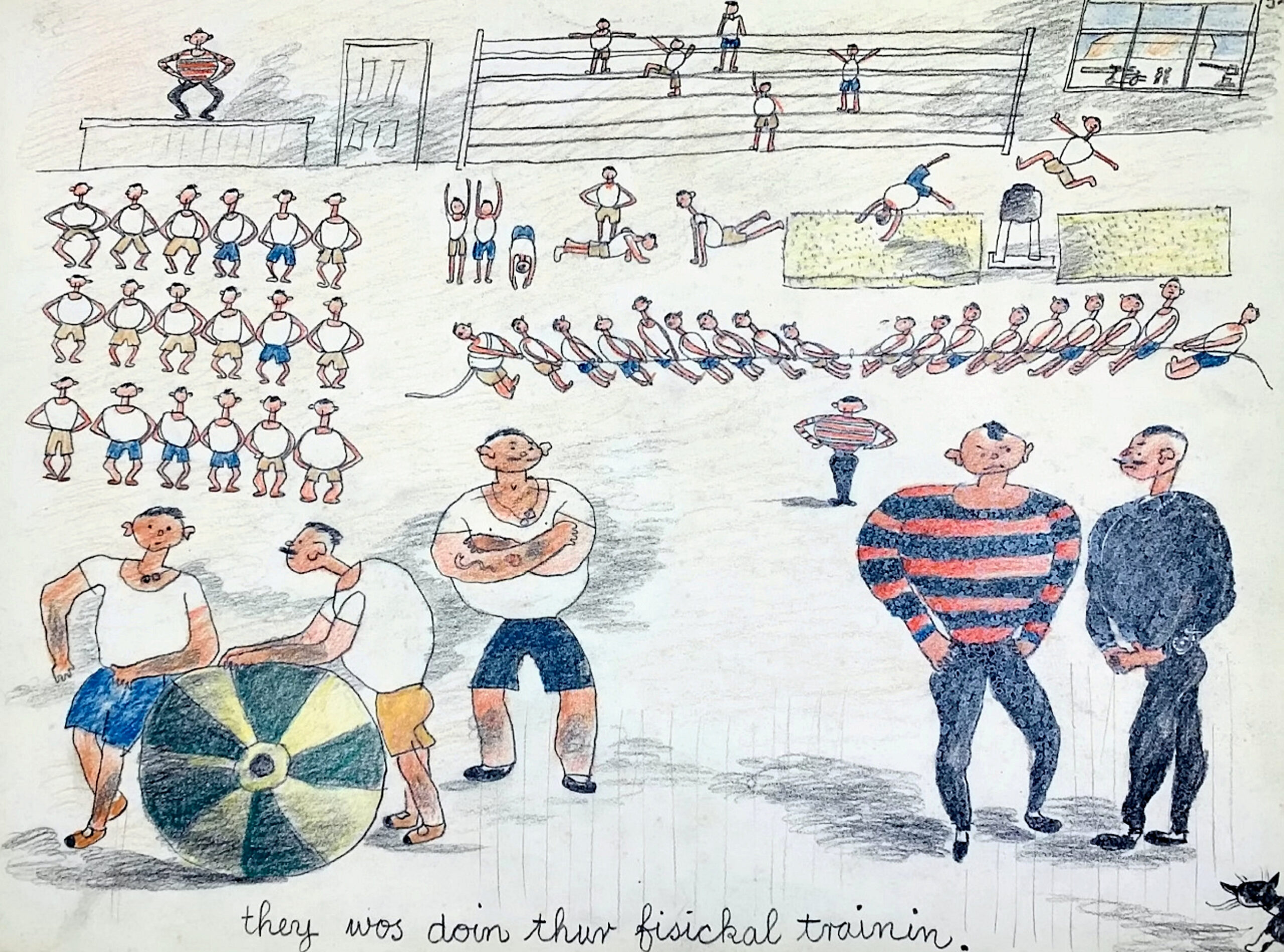 Hilarious cartoons sketched by a World War Two soldier and kept in an attic for almost 80 years are set to fetch thousands of dollars - after experts said they were worthless. (Steve Chatterley/Zenger)

Hilarious cartoons sketched by a World War Two soldier kept in an attic for almost 80 years are set to fetch thousands of dollars – after experts previously said they were worthless.

The Raymond Briggs-style crayon drawings provide a tongue-in-cheek look at life in a British army camp in 1943 from the perspective of the “Kamp Kat”.

They were scribbled on army-supply paper by an unnamed soldier who was killed in battle, but his cartoons were saved by a friend who brought them back to Britain after the war.

The beautiful sketches show soldiers doing physical training including playing tug-of-war, while another one shows a new recruit having his head shaved.

One picture shows a miserable-looking private, called ‘Curley’, peeling a huge pile of potatoes for ‘spud bashin’ while another shows soldiers cleaning and having banter in a shower block.

The two illustrated books belong to Richard Minton who inherited them from his uncle who fought alongside the cartoon-drawing soldier.

The uncle, also called Richard Minton, kept the drawings in his loft for 50 years before passing them to his nephew in 1990.

Mr. Minton, from Newcastle-under-Lyme, Staffs., also stored the books in his attic and forgot about them until he came across them last year.

He took them to a war museum for valuation as well as showed them to antiques experts who all said they were worthless.

But after the pictures were uploaded to Twitter and attracted thousands of hits worldwide, the collection’s true value was realized.

The books are now going under the hammer this summer and are expected to fetch between 2,000 and 5,000 dollars.

Mr. Minton, 67, who works for a plant nursery, said: “I was left the artwork by my Uncle Richard as he didn’t have any children.

“They were stuffed behind a water tank in his loft in Rushbury, near Shrewsbury, for about 50 years and then ended up in my loft.

“I immediately loved the artwork and camp cat story.

“I took the manuscripts to a war museum in London but they said they had archives of material and didn’t know what to do with them.

“I then took them to an antiques expert who dismissed them as prints.

“I wasn’t very impressed as they were clearly pencil work. I also took them to an army
museum in Shropshire.

“They were very nice and loved them but didn’t seem to know what to do with them.

The ‘author’ of the unknown soldier’s book is Little Purr, the camp cat – or kamp kat, and the books show everyday camp life from the cat’s perspective.

The cat takes the reader on the tour of camp, from the football pitch to the medical room full of ‘pore urted soldiers’ and Mush the rat catcher ‘wi sum of mi dreaded enemies’.

The scene is set on a page entitled ‘The Alterbyografy of a kamp kat’.

It reads: “I was born in a guard room. My mum wos a kookouse kat. I don’t know much about dad cos he was a bit of a rover and left my mum when I was born.

“Wen us grue up a bit them others wos took away to nice omes an me was left in gard room an made a fuss of.

“My mum went orf wif someone else and I was left alone. The solgers all liked me and wood bring me sum of their milkie and bits of skrap meat to eat an’ I grue up to be a nice pretty kat…”

The collection of cartoons will go under the hammer at Hansons Auctioneers at Bishton Hall, Staffs., on July 5.

Jim Spencer, Hansons paper and books expert, said: “The vendor, Richard Minton, approached me as a last roll of the dice.

“When I opened the fZenger News, my eyes must’ve lit up. I just kept saying ‘I love it’.

“The blended crayon reminded me of the work of artist Raymond Briggs. The naive style was so charming.

“I’ve handled 13th and 14th-century manuscripts but this was the most remarkable illustrated work I’d ever assessed.

“I suspect many militaria specialists would’ve overlooked the significance of these illustrations.

“These aren’t medals, or weapons, or uniforms, and they’re not even depicting the battlefield. But I looked at these as a work of art.

“All the incidental detail of passing time in camp. The artist captures everything so perfectly, from peeling potatoes to cleaning between toes.

“He even captures the texture of itchy bedsheets.

“It’s seemingly untrained and naive, charming beyond words, comical, but deceptively clever in composition and style. It deserves to be published and seen by the world.

“I posted a thread on Twitter and it went viral. Artists and publishers in the USA have been in touch.

“Bearing in mind these books were created 79 years ago, what we also have here is a flavor of army life during the 1939-45 conflict.

“They are both art and historical record.”

«Previous Post
Prize Win: Ronaldinho To Take Fans On Tour Of Paris Ahead Of UEFA Champion’s League Final»Next Post
VIDEO: Having A Four-Legged Friend Improves Quality Of Life, According To Report