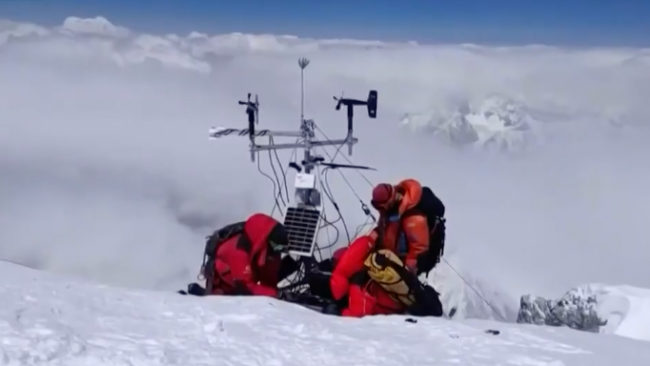 Earth Summit Mission 2022 is setting up a new weather monitoring station on Mount Everest. The data will provide key information for policymakers on climate change and sustainable development.  (AccuWeather)

How high can science go?

On Wednesday, the 12-member crew reached the summit of Mount Everest, also known as Mount Qomolangma, which will be the new location for the automatic weather station. At the summit, crew members used high-accuracy radar for the first time to measure the thickness of the ice and snow. They also collected samples of the snow, ice and rock for further research.

The solar-powered station is designed to last for two years under harsh weather conditions.  It is equipped with a satellite communication system for data transmission, and the radio has been coded to transmit every 12 minutes, according to various Chinese media reports.

This weather station is the highest altitude of its kind, replacing the 2019 station, which sits at an altitude of 27,657.5 feet and was installed by the U.S. and British scientists on the south side of the mountain, according to the Tibetan Plateau Research (ITP) group under the Chinese Academy of Sciences (CAS).

One of China’s main tasks in this scientific expedition is to install eight elevation gradient meteorological stations on Mount Everest. Three of the eight stations were installed earlier this year. The stations sit at 23,057.7 feet, 25,557.7 feet and 27,230.9 feet. The newest one will be the highest, sitting at 29,029 feet.

The data collected from these weather stations will yield valuable insight into the condition of mountain snow and local glaciers, the water source for more than 10 major rivers in Asia that nurtures billions of people.

In addition, the new weather stations are expected to make climbing safer, as roughly a quarter of fatalities on the mountain occur due to bad weather.

Previously, climbers had to rely solely on weather forecasts, which were mere predictions based on model data. The new station will allow forecasts to be combined with real-time weather data, making them more accurate.

“From a scientific point of view, the changes in the climate and environment of the Tibetan Plateau can affect the whole world,” Yao Tandong, the leader of the summit mission, said in an interview with Xinhua, the official state press agency, before the mission, the South China Morning Post reported.

Since the mid-20th century, China has launched multiple research expeditions to Mount Everest, but the majority of those studies have been conducted below an altitude of 19,685 feet. That led to many unanswered questions in the scientific community about how climate change is affecting the mountain.

The data from these new weather stations will allow scientists to study and analyze the effects of human activity and climate change on the region.

But preparing for an expedition like the one the 12-member crew undertook Wednesday required more than 200 people and two years of detailed work.

The crew was equipped with the most advanced scientific instruments available, such as drones, uncrewed surface vehicles, weather balloons, airships and even helicopters, according to a news article from China Daily.

“As our research continues, I believe we will have more discoveries and developments to share with the world,” Tandong told the China Daily.

«Previous Post
Charged Up: Batteries May Be Key To Saving The Planet»Next Post
Bikini One Day, Boots The Next. Suddenly, It’s Winter In May