Bikini One Day, Boots The Next. Suddenly, It’s Winter In May

Remembering the freak spring snowstorm that hit the Northeast U.S. 45 years ago.
By Marianne Mizera May 10, 2022
Facebook
Twitter
Linkedin
Email 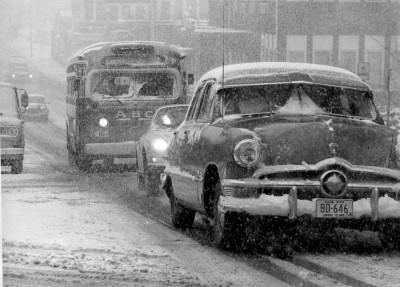 Cars coping with a snowstorm in downtown Attleborough, Massachusetts, on May 9, 1977. A Ford from the 1950s leads the way. (The Sun Chronicle, Attleboro, Massachusetts)

It was the year of the original “Star Wars” movie release. Disco was at its peak, the Pontiac Trans Am was the must-have car and Jimmy Carter was President of the United States.

Yet the year is also notable for one particular weather event: the Mother’s Day snowstorm of 1977 that hit parts of New England, New York and Pennsylvania.

As it swept in, the storm’s intensity caught many by surprise. It left behind not just a dusting here and there. Many places got walloped with over a foot or more of heavy, wet snow.

“Would you believe that I wore my winter boots today? Last week, I had on my bikini,” Barbara Hickey, a secretary in then-Connecticut Gov. Ella Grasso’s downtown office in Hartford, told The New York Times after the storm.

Spring flowers that had blossomed days, even weeks earlier, were suddenly droopy, covered in white veils of snow. Dozens of abundantly leafy trees quickly snapped from the weight of the snow, causing more than 600,000 power outages in New England alone.

Accumulations ranged from a whopping 27 inches in the Catskill Mountains of eastern New York and nearly 13 inches in Worcester, Massachusetts, to 7 inches in Providence, Rhode Island, and 1.3 inches in Hartford, Connecticut, over the two-day period of May 9-10, 1977, according to the National Weather Service (NWS).

The newspaper headlines at the time said it all:

Some TV outlets dubbed it a “monster storm” and the South Middlesex (County) Daily News proclaimed it “A May Blizzard!”

Technically, it wasn’t. A storm reaches blizzard status when it brings sustained winds or wind gusts of 35 mph or greater and low visibility for three consecutive hours.

But it remained mighty.

This double-barrel storm system started brewing on Mother’s Day evening, May 8, with a storm over the Great Lakes and another in Pennsylvania. By the following day, the two had consolidated and intensified, developing into a storm with strong northeast winds along the Atlantic coast accompanied by heavy precipitation, according to AccuWeather meteorologists.

“The storm arrived about 4:30 a.m. (May 9), bringing with it temperatures in the 30s and wind gusts of up to 45 miles per hour,” recounted NWS meteorologist Robert Grimes in the Worcester Telegram & Gazette.

When people woke up and peered outside their windows later that morning, they were shocked.

A May snowstorm is “extremely rare. That’s quite a feat,” said David Dombek, a senior meteorologist who’s been with AccuWeather for 41 years and was studying at Penn State University at the time. “I was all excited about it, then was bummed we got only a dusting” in central Pennsylvania.

“That’s a once-in-a-lifetime event, that’s how rare it is,” added colleague Tom Kines, a 38-year veteran meteorologist at AccuWeather. “Any snow during the first half of May is amazing.”

Kines said normal high temperatures for this time of year are in the upper 60s. But from May 8-10 in 1977, they had plunged into the 30s.

Just days before the storm, temperatures had climbed into the 70s and 80s degrees Fahrenheit in many locales, NWS data noted. Recreational boats were in the water, flowers were blooming and lawns needed mowing.

The storm’s arrival proved a heavy dose of reality for the Northeast, making for a miserable experience.

Residents, town officials and road crews, alike, were all caught off guard by the wintry mess.

Plows that had been put away for the season had to be re-attached to trucks and quickly pressed into service. Numerous accidents were reported as drivers who had grown accustomed to snow-free roads suddenly found themselves slipping and sliding on the highways and byways. Boats docked in coastal waters were heavily damaged by the blustery winds, with many “ripped from their moorings,” according to the NWS and media reports.

James McKeon, then the public works superintendent for North Attleborough, Massachusetts, called it “the worst damage I’ve seen since the hurricane of 1938,” according to The Sun Chronicle.

The storm forced the closure of several highways, including Interstate 495 around Marlboro, Massachusetts.

“The thing I remember most was all the heavy branches that broke. Branches were down everywhere,” said Mike Kirby, the former editor of The Sun Chronicle in Attleboro, Massachusetts, who was in college at the time.

“It wasn’t that there was a ton of snow, but it was break-your-back shoveling snow, for sure,” Kirby told AccuWeather. Some neighborhoods waited a week for power to be restored.

The storm behaved in such a way that it dumped significant amounts of snow in some spots, while adjacent towns were left unscathed with barely a trace or merely a slushy accumulation, the NWS noted.

“Because of the convective nature of the storm, some weird local variations occurred … with one town getting almost a foot while just five miles away only a couple of inches fell,” according to archived data reports gathered by AccuWeather. “Vivid lightning accompanied the snowfall in many communities.”

Interior sections of New England, stretching into the Catskills and Poconos of Pennsylvania, bore the brunt of the surprise storm.

Some coastal communities, such as New Bedford, Massachusetts, saw 1.8 inches and Boston‘s Logan International Airport recorded a half-inch, according to NWS data. In the the suburbs,  thunderstorms with snow reportedly dumped 10 inches in the Natick-Wellesley area just outside the city.

A trace of snow fell in Newark, New Jersey, yet Vernon Township in the northwest part of the state got enough snow from the “bizarre storm” for kids to build a snowman, according to a front-page story that ran in The Star-Ledger. A half-inch of snow was measured in nearby Morris County, according to New Jersey state climatologists.

Regions to the north and south, New Hampshire and Vermont, as well as New York City, also barely got a trace of snow.

No other May storms on record would come close to that incredibly rare storm of 1977. For the Northeast, snow in March and April is expected. A mid-spring snowstorm is a phenomenon.

It would take nearly four decades before measurable snow was recorded after May 9 in this part of the nation. On May 18, 2016, Binghamton Airport saw nearly 2 inches of snow, according to AccuWeather data.

And in 2020, a polar vortex unleashed a rare May snow, prompting Central Park in New York City to tie that May 9, 1977 date for the latest snowfall ever seen there, according to the NWS.

❄❄❄Snow in Central Park! In May! The Central Park Automated Surface Observing System (ASOS) recorded snow. This ties the record latest snow set on this day in 1977. pic.twitter.com/RBOHenr3ZG

Those enduring the misery of the Mother’s Day storm found solace in the fast-melting mounds of snow. “Those places that got a foot of snow, within a couple of days it’s gone,” AccuWeather’s Dombek said.

Shades of green returned and flowers sprang back to life by May 11.

Those who were gleeful over this Mother’s Day storm? The youngsters waking up Monday to a fresh coat of white glistening outside their doorstep were unexpectedly treated to a late-season snow day.