Petr Andryushchenko said: "A real ghetto! The men were placed in the premises of the school and club.
By William McGee May 9, 2022
Facebook
Twitter
Linkedin
Email 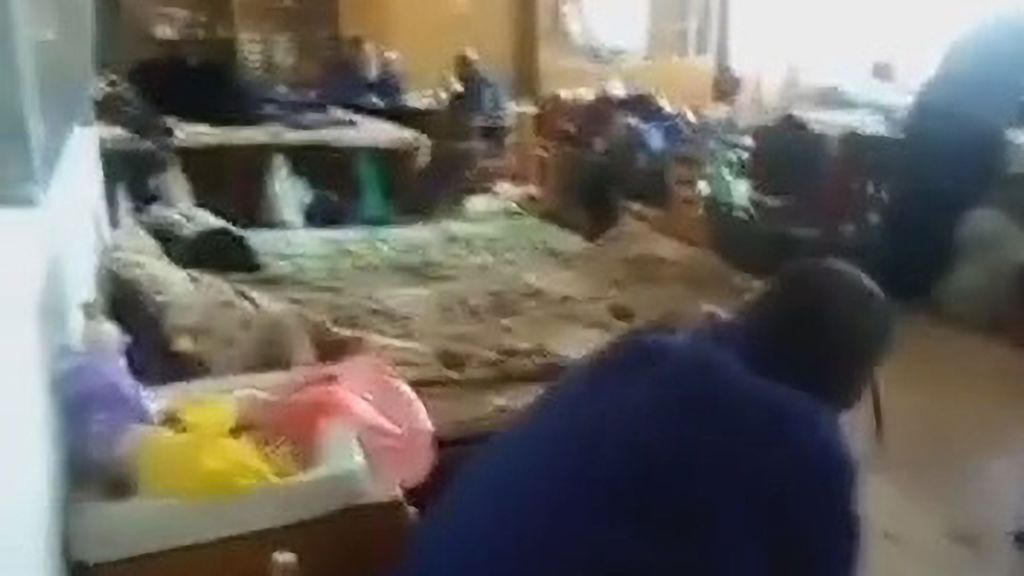 Petr Andryushchenko, adviser to the mayor of Mariupol, published a video from the filtration camp for Mariupol residents in the village of Bezymyanny, in May, 2022.  (@andriyshTime/Zenger)

This footage shows the terrible conditions in a so-called ‘filtration camp’ in besieged Mariupol, which a local official has likened to a “ghetto”.

Petr Andryushchenko – who is an advisor to the mayor of Mariupol, Vadym Boychenko – said: “A real ghetto! The men were placed in the premises of the school and club.

“For the fourth week they are forcibly held, and not allowed to leave without a military escort.

“The conditions of detention are horrendous – people are forced to sleep on the floor in the corridors.

“The first case of tuberculosis was recorded among people at the school, resulting in the sports hall being turned into an isolation ward where a large number of people are locked up.”

Andryushchenko said if just one captive goes missing, their Russian captors promise to torture and even shoot other detainees.

He said the men are fed gruel there three times a day and there is only one sink with cold water for hygiene.

Andryushchenko said none of the prisoners may leave the camp. He said there have been isolated escape attempts, but the men were caught and beaten.

He said all detainees have been forced into labor in the village of Bezymyannoye and in the city of Novoazovsk under military escort.

The official also said: “As for their further fate, the occupiers note that they have not yet decided whether to use people as the labour force in the examination of the rubble of Mariupol or to mobilise them into the army.

“At the same time, on 2nd May, it was announced that the men would take part in the parade on 9th May as ‘prisoners’. To do this, they will be dressed in the uniform of Ukrainian soldiers.”

Andryushchenko added that only women remained in the areas from which the men were taken.

He said Russian troops constantly rob their houses and that the women dare not go outside for fear of being raped.

The adviser said the men in the camps were taken by the Russian military from Guglino, Mirny and Volonterovka.

He said they were not allowed to take any personal belongings with them and their documents were confiscated.

The official said a case of tuberculosis has been recorded in Bezymyannoye and, most shockingly, a prisoner died in Kazatsky after he was allegedly refused medical care.