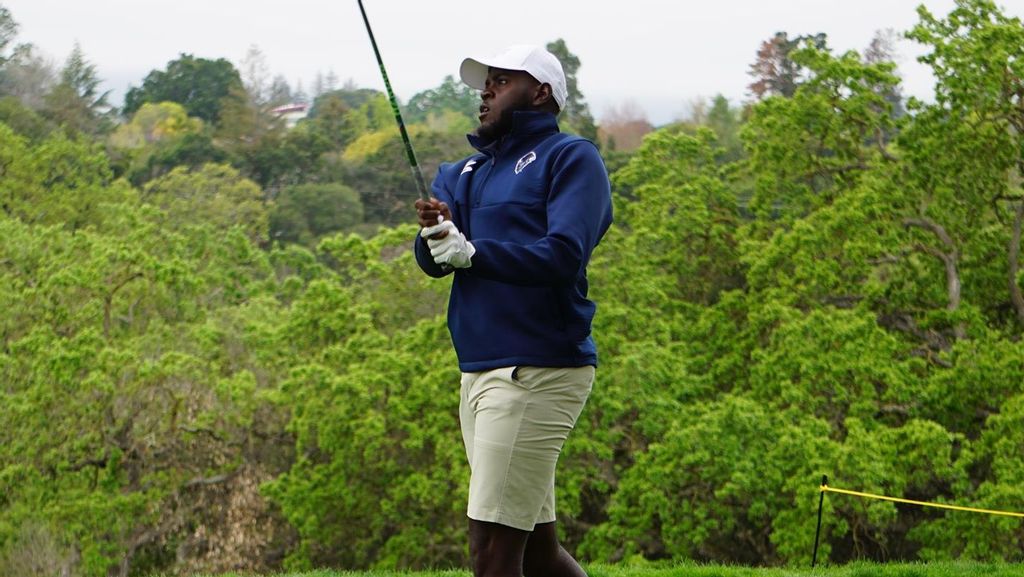 The fruits of NBA superstar Steph Curry’s impact on Howard University’s golf program sprang into full bloom this past weekend (May 5-8) at the Wells Fargo Championship at TPC Potomac at Avenel Farm golf course just outside of Washington, D.C.

Fresh off a Mid-Eastern Athletic Conference men’s team golf championship, their men’s individual champion took his first shots with the pros. Gregory Odom, Jr. transferred to Howard University from Memphis State and became the catalyst to their success and is hoping the event will tee off his full-time PGA Tour career.

Odom Jr., coming off a stellar senior year at Howard, made his PGA Tour debut on a sponsor exemption. Howard, an HBCU, didn’t have a golf program two years ago. This year, led by Odom Jr., the Bison captured their first MEAC Championship ever and they appear to be just scratching the surface on becoming the premiere HBCU golf program and one of the best in the country.

His play in the Wells Fargo event didn’t go so well; he did not make the cut for the full four days of the PGA event, shooting 12-over for his first two rounds.  Still, he relished the chance to compete against top-tier pro players.

“When there’s a commitment to a program like something that Steph Curry made it gives us a chance to compete with any team in the country,” said Odom. “I think this is just the beginning of something special we are building at Howard.  We can do great things here if we trust the process.”

Despite his status as a senior, Odom Jr., has one more season of NCAA eligibility under the changes brought on by the COVID-19 pandemic. Student athletes have been granted another year of eligibility to compete at the college level. The new policies also allow those athletes to capitalize on their name, image and likeness (NIL) and not be penalized for financial compensation, Odom Jr. could be one of the best players in the nation next year and cross a threshold of breaking another HBCU sports barrier during this unprecedented time of national exposure.

The ramifications if Odom Jr. taking part in the tourney was the  second major shot of credibility to the HBCU golf programs this spring with ties to the NBA. North Carolina A&T’s program has gotten a boost from 16-year veteran and two-time world champion J.R. Smith, who last played with the Los Angeles Lakers. Smith, a walk-on with the Aggies golf program, was named their Academic Athlete of the Year, and has taken full advantage of the new opportunities presented by NIL, the relaxed eligibility standards present in the new world order of college sports.

Smith never went to college after finishing high school and more than 16 years after going straight to the NBA he retained his eligibility and is now competing in golf. He signed an NIL deal with apparel brand Lululemon to be its first male golf ambassador. With over 6 million instagram followers alone Smith has become highly coveted by golf apparel and equipment manufacturers for sponsorship opportunities.

“We have a long history of supporting HBCUs, and this year we are using the Wells Fargo Championship to create once-in-a-lifetime experiences for young, diverse golfers,” said Pam Batalis, Wells Fargo Senior Vice President of Sponsorships & Brand Engagement in a statement. “With our sponsor exemption, we’re proud to help Howard University student Gregory Odom Jr. make his PGA Tour debut.”

Howard’s entire athletic program has seen its national brand grow exponentially. Its men’s basketball program played in the NBA HBCU Classic versus Morgan State during the pro league’s All-Star weekend earlier this year in Cleveland. Howard’s women won their first NCAA Tournament game in March and their 11th MEAC title, which is the most in conference history.

The proliferation of blue chip team sports student athletes wanting to take their talent to campuses that will embrace their cultural heritage while allowing them to compete in intercollegiate athletics has made programs like Howard’s a destination and not a fallback.

“If HBCUs were to make the full commitment to golf you could really see our sport take off,” said Howard’s golf coach Sam Puryear. “You would be surprised how many inquiries we are getting about the program right now from all over the country who are in the [NCAA transfer] portal. As good as Greg is, he is going to be challenged by the next year’s recruiting class to remain as the number player on the team.”

Curry’s multi-million dollar long term commitment to the program seems to have open the floodgates to the fledgling program. Odom Jr., however, represents another step forward in the elevation of golf as a presence in the place that is known these days for being Vice President Kamala Harris’ alma mater. However, this is the moment Odom Jr. and Puryear envisioned when they first discussed transferring to Howard.

Odom Jr. embraces his opportunity to become a standard bearer in this moment,  while Puryear is doing his best to try and keep that understated personality calm as his dream of playing on tour becomes a reality this week. He is motivated by the opportunity to help the next generation get to his level.

“The game of golf has given me a lot,” Odom Jr. said “I’ve had opportunities to start conversations with people from tour pros to people from all walks of life. I want to be a role model to kids like me.”

TPC Potomac was expected to be a challenge for Odom Jr. to make the cut. The course last hosted the PGA in 2018 and has hosted 21 tour events. Since the suburban Maryland course was remodeled in 2015, even par has been reduced by a stroke. The par-70 7,104 yard course presents many challenges to experienced veteran players. It features bent grass tees, greens and fairways, and Scottish-style bunkers with water hazards that are creeks which run into the Potomac River.

Odum Jr. was recently gifted a head cover that now adorns his driver. It resembles a gorilla and sets a tone for every round.

“If I’m going to be successful, I’ve got to play in ‘beast mode’ every round,” he said.