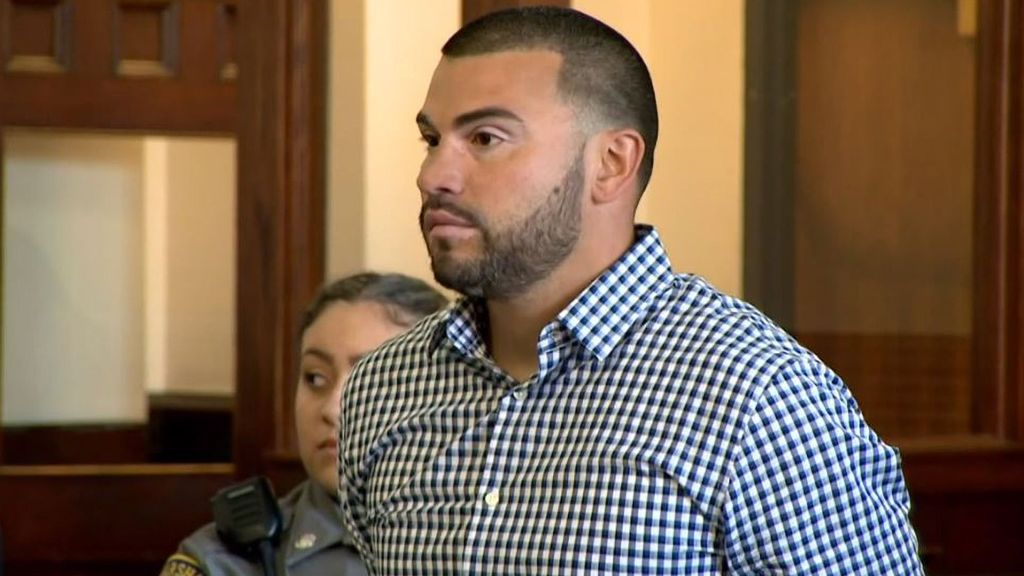 A cop running an elite military canine training school has been seized and accused of executing 10 dogs that could not make the grade.

But three trainers have been arrested facing allegations of cruelty after being accused of shooting dogs that did not respond to training.

Luna is said to have carried out the killings of dogs that could not take the training and buried them on the school land.

Owner Riviera is also said to have kept a secret supply of explosives, used as part of the brutal training.

And even puppies were cruelly abused by being left out in all weathers until they died.

“Black Rock Canines is a training facility for potential Military and Police canines, as well as for privately owned canines by individuals seeking such training.

“The owner of Black Rock Canines, David Rivera Jr., is a sworn Police Officer for the Town of New Canaan, CT.

“Based on the above allegations, Naugatuck Detectives and Animal Control Officers launched their own investigation separate from Stratford and State Police.”

They added: “Through interviews with witnesses it is alleged that numerous canines of all ages and breeds, including German Shepherds, Belgian Malinois, and Labrador Retrievers, have been abused and injured during their time at Black Rock Canines.

“More specifically, that at least 10 canines have been killed by employees with a firearm.

“The canines that were shot and killed were then buried on the property by the owner/operators of the business.”

The NPD stated: “On April 26, 2022 Naugatuck Police assisted State, Federal, and Stratford Police with the execution of a search-and-seizure warrant at Black Rock Canines.

“Based upon investigators’ observations at the scene, Naugatuck Police Department obtained a separate search-and-seizure warrant which led to the seizure of evidence directly related to the allegations of animal cruelty and abuse.

“Naugatuck Detectives continued to work around the clock and through the past weekend and their investigative efforts developed that the accused, Daniel Luna (the General Manager of Black Rock Canines), had abused numerous puppies and dogs during his time of employment at Black Rock Canines facility.

“Daniel Luna’s mistreatment and abuse of these animals included the shooting of dogs which were deemed no longer viable for the business.

“Witnesses also stated that Daniel Luna’s lack of adequate care led to the death of puppies who had been left exposed to harsh weather elements.

“The mistreatment of the dogs at this facility is not the only illegal activity that was discovered to have taken place at the Black Rock Canine’s facility.

“Witnesses reported that military-grade high explosives were being unlawfully stored on the property.

“The owner, David Rivera had directed employees on numerous occasions to remove high-grade explosives from the storage location at Black Rock Canine and transport them to the Naugatuck Event Center for canine training purposes inside the building.”

The police said: “At the same time, the Event Center would usually contain numerous other people who were engaging at the other businesses such as a cycling center and retail clothing store.

“These military-grade high explosives were allegedly stored in Tupperware containers and handled by inexperienced employees who lacked the training or the necessary permits to do so.

“On April 29, 2022 Naugatuck Police were dispatched to Black Rock Canines again for the report of employees being threatened. An investigation revealed that Rivera’s father, David Rivera, Sr. (DOB 06/11/1964) of Stratford, CT, arrived at Black Rock Canines and evidence showed that he threatened one current and one former employee with a knife.

“Rivera Sr. was arrested and was charged with Threatening in the 2nd degree, Breach of Peace (2 counts). Rivera Sr. was released after posting a USD 25,000 bond and is scheduled to appear at Waterbury Court on May 11, 2022.

“On May 2, 2022, David Rivera Jr. (DOB 10/13/1987) of Stratford, CT turned himself in to the Naugatuck Police Department on an active warrant for his arrest and was charged with Conspiracy to Commit Cruelty to Animals, Reckless Endangerment 1st degree, Conspiracy to Commit Euthanization of a Canine.

The NPD continued: “On the morning of May 3, 2022, Naugatuck Police Detectives obtained a subsequent search-and-seizure warrant allowing both State and Local Animal Control Officers to remove the remaining 31 dogs and place them at a shelter.

“These dogs will remain at the shelter and receive the proper care they need pending the disposition of this case.

“The allegations outlined in these affidavits are not only illegal but also disheartening. As a police agency with three successful working canines that serve our community to their highest capability, we are appalled at the treatment that other dogs of the same caliber were given while under the care of Black Rock Canines. Furthermore, the fact that Rivera Jr. is a Police Officer and used that authority in the commission of these crimes undermines the trust and confidence that all Connecticut Law Enforcement Officers seek to build with their community.”