The mother-of-one from Shoreham-by-Sea, Sussex, says she will never stop dancing "until they take me away in a box".
By Anamarija Brnjarchevska May 6, 2022
Facebook
Twitter
Linkedin
Email 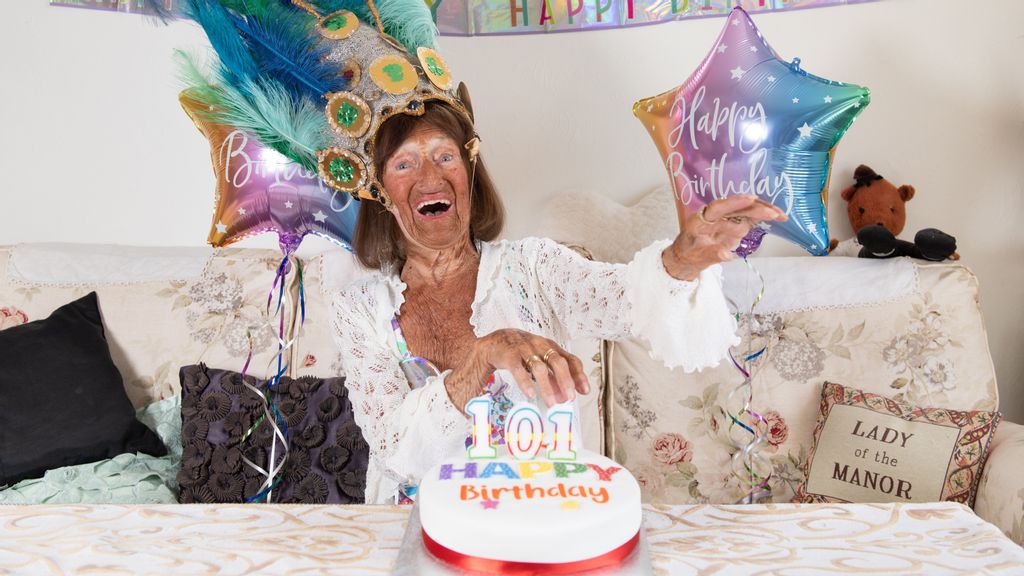 A former pro dancer who still hosts daily dancing and keep fit lessons is preparing to show off her best moves - for her 101st birthday. (Tony Kershaw/Zenger)

A former pro dancer who still hosts daily dancing and keep fit lessons is preparing to show off her best moves – for her 101st birthday.

Grandmother-of-four Dinkie Flowers reaches her latest milestone on Saturday (May 7) and will be celebrating the only way she knows how – with a good old boogie.

Dinkie started dancing at the age of three and has traveled the world to showcase her skills, including Baghdad to dance in front of the Iraqi Royal Family.

The mother-of-one from Shoreham-by-Sea, Sussex, says she will never stop dancing “until they take me away in a box”.

Dinkie, who was once the only British acrobatic skater, has been teaching dance and keep fit classes all her life and still practices her barre movements every morning.

The exuberant dancer said: “I just love dancing. I always have and I always will since I was three years old.

“Ballet, tap, modern, I cannot get enough of it.

“If I had one piece of advice for people it would be to get off your bottoms and dance.

“It does not matter how old you are. You could be 30 or 100 but as long as you have the movement you are fit and well.”

Dinkie learned her skills at London’s Italia Conti Academy of Theatre Arts and went on to ice skate all over the world with celebrity Tom Arnold, where she featured on Holiday on Ice and Hello Ice.

From getting arrested in 1940s Paris for wearing a red playsuit – the color associated with illegal prostitution at the time – to perform for Prince Philip at an Ice Gala in 1952, Dinkie really has danced her way through the stages of her life.

Her best friend Lesley, who has known Dinkie for 40 years, added: “She is an absolutely amazing lady and an inspiration for people to keep moving and exercising.

“She takes no medication, has no hearing aids, no glasses and her posture is incredible.

“I do not know anyone else like her and despite being friends for such a long time, I still cannot believe what she can do”.

She also traveled to Iraq to teach the royal family ice skating through the British embassy, but miscommunication nearly resulted in the dancer being forced to stay.

Lesley added: “They wanted to teach them (Iraqi royal family) about refrigeration.

”Dinkie was one of the leading people – and they built an ice rink for the royal family In Iraq.

“Dinkie taught the prince and was there for a few months.

“When it was time to go, some sheik who bought the rink thought she came with it.

“He thought he’d bought the rink and that little dolly Dinkie came with it.”

Upon their return from her global travels, Dinkie decided she wanted to pursue dancing and set up her own successful dance school called Dinkie Flowers Stage School, in Shoreham.

At just 98 years young, Dinkie made her TV debut tap-dancing her way through the auditions to appear on The Greatest Dancer.

Dinkie went on to marry her husband George, who managed the famous Raymond Revuebar in London, but he sadly passed away in 2005.

The couple had a daughter Sarah, who followed in her mother’s footsteps as a professional dancer, and four grandchildren.

Lesley has organized a big party at the end of the month to celebrate Dinkie’s special birthday. She added: “It will be a reunion and celebration of her life with all of her memorabilia.

“She will also be joining iStar, the British rhythmic gymnastics group, onstage in their performance of The Greatest Showman.

“Dinkie is always the last one on the dance floor – and that is something that will never change.”