The owner of the dogs posted a clip on her TikTok page where she revealed that in total there had been eight puppies born.
By Arian Movileanu May 6, 2022
Facebook
Twitter
Linkedin
Email 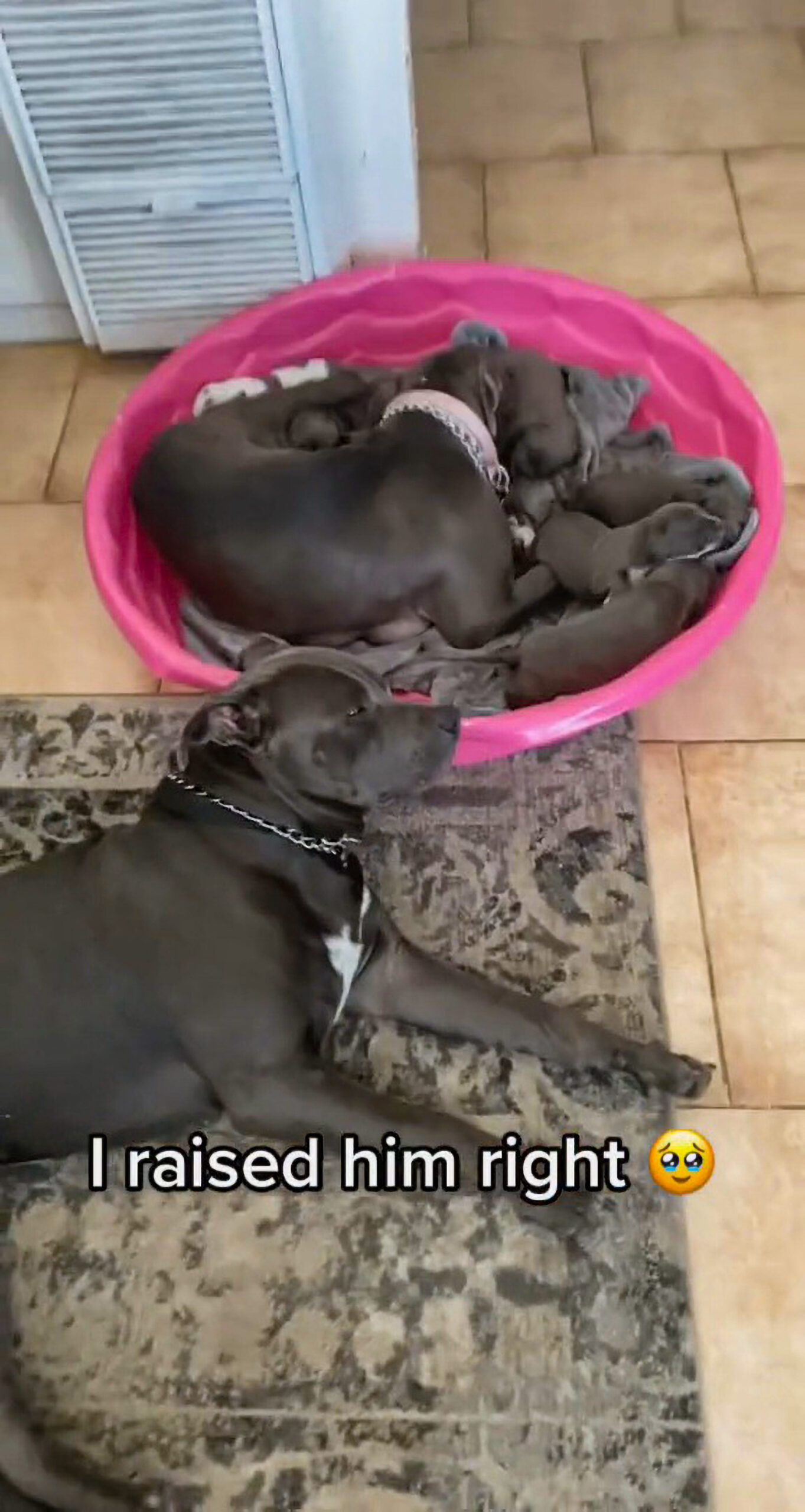 Kilo, a dog, lies on the floor next to his newly born puppies and their mother Blue, in Southern California, USA, in April, 2022. (@tu_muneca/Zenger)

This is the heartwarming moment when a daddy pit bull meets his puppies for the first time just two days after they were born.

The loving dad is seen standing guard over the new puppies, and then both mum and dad lick them into shape with a quick wash.

The owner of the dogs and puppies, a preschool teacher named Stephanie, posted a clip of the first time meeting on her TikTok page, @tu_muneca, where she revealed that in total there had been eight puppies born

The 31-year-old from Southern California captioned the video with the message: “When everyone tells you to not let daddy meet the pups until four weeks but you’re raised with love and are the sweetest boy.

“Met them on the second day, amazes me that every time he heard them crying he runs to see what’s wrong and helps mommy lick them clean.”

She said that the mum was called Blue and that the father of the puppies was called Kilo and that she had owned them both since they were two months old.

Despite the fearsome reputation she said she had no qualms about leaving the adult dogs, both Bluenose Pit Bulls, together with the pups and added: “My dogs aren’t aggressive, they are very sweet and loving animals and their inside dogs so they are very spoiled.”

She added some people had told her that there is also a risk that the mother might be violent but added: “I know both of my pupils are really huge sweethearts.”

Although the litter of pups was an accident as both dogs are just a year old Stephanie said there were no regrets and she was glad to have them.

Bluenose pit bulls first appeared in the 19th century in the UK after crossing a bulldog and a terrier to try to make the dogs more athletic and more muscular.

Bluenose pit bulls also have a slight pigment change around the nose which gives them their name. They are actually not a separate breed but rather a variant on either the American Pit Bull Terrier, Staffordshire bull terrier or American Staffordshire terrier.

But the ‘blue noses’ are more notable in the American bluenose pitbull.

Like other pit bulls, despite their dangerous reputation, they are actually regarded by most owners as very loving dogs although with a lot of energy. Only those that are mistreated and not properly raised can be dangerous.