Footage shows Oskana in her wedding dress dancing with her groom Viktor Vasyliv in her hospital ward while other patients applaud.
By James King May 6, 2022
Facebook
Twitter
Linkedin
Email 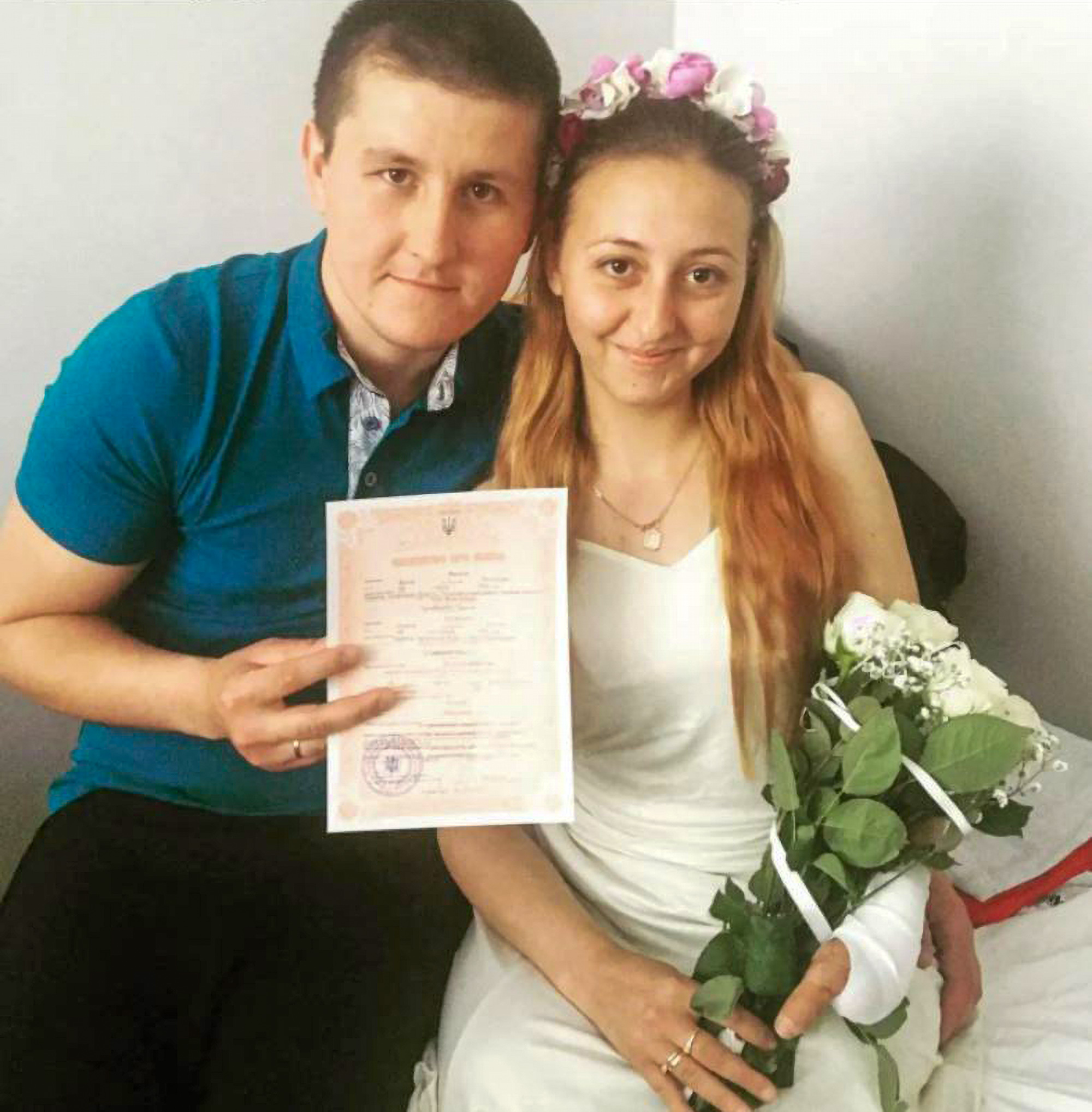 Oksana, a 23-year-old nurse from Lysichansk, Ukraine, who as result of the explosion lost both legs and fingers on her hand, with husband Viktor. (@ksyucha_kareglaska_/Zenger)

A Ukrainian nurse who begged to be killed when she lost her legs and fingers to a Russian shell blast has danced with her husband at their wedding.

Brave Oksana Balandina, 23, told followers on TikTok she hoped it would inspire people by showing them life should “not be postponed”.

Heartwarming footage shows Oskana in her wedding dress dancing with her groom Viktor Vasyliv in her hospital ward while other patients applaud.

Oksana revealed that her tragedy happened after the hospital she worked at was closed because its windows had been blown out in the siege on Lviv.

She said that she and her husband had been worried about feeding their family and were walking to a humanitarian aid center when they spotted an unexploded shell sticking out of the ground.

She said: “My husband was walking slightly behind me and talking to a friend. I wanted to tell them about the shell and then suddenly I found myself flying through the air.”

The ambulance was unable to reach her in the field, and her husband Viktor and stepfather had to carry her to the paramedics, where her shredded clothing was cut away and they began emergency first aid.

She said she was suffocating at one point – there was no oxygen, and then she mercifully passed out.

Later, when she came to, she realized the extent of her injuries.

She said: “I saw that I had no legs. Doctors had to amputate them in the upper third of the thigh.

“My left hand I had only my thumb left.

“When everything happened on the road, I screamed and asked to be killed. I didn’t want to live, I didn’t want my children to see me with a disability.”

Yet the mother of two said she had now discovered a determination to live for her family.

While in hospital, the couple decided they had been given a second chance, so they did not waste waste any time and arranged the wedding ceremony in the hospital.

Oksana said: “We decided life should not always be postponed until later.”

A video of her enjoying her first dance at her wedding with her new husband went viral when it was shared online by the Ukrainian Parliament, which also wished them well for the future.

The tweet said that Oksana and Viktor’s wedding was the culmination of “a very special love story”.

She has started doing rehabilitation after moving to Dnipro and is also keeping busy with a TikTok account about her journey.

She said she wanted people to be open about their disabilities and also to let those who care about her know that she’s doing fine.

She said, though, that her biggest supporter was her husband, who is beside her all the time and never leaves her for a minute – helping her with everything.

She said: “We are strong, we will cope. If God leaves you alive, then you have to accept it’s destined to be so.”

The young woman is still being treated, saying once things have stabilised, she will be going to Germany for more rehabilitation and prosthetic limbs.