US Wildfire Forecast: Drought To Spur Another Intense Season 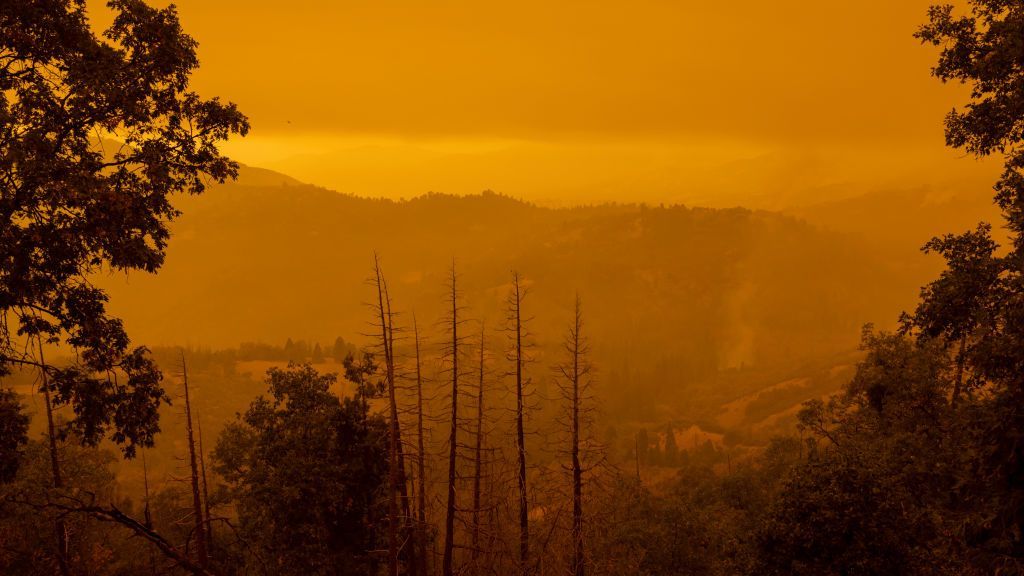 Smoke caused by wildfires is seen covering a landscape south of Hot Springs, Calif., in September 2021. A wave of similar fires is forecast for the remainder of 2022 by AccuWeather. (David McNew/Getty Images)

The number of wildfires and burned acreage across the western United States is already well above normal, and AccuWeather forecasters say it’s just a precursor to another intense wildfire season this year.

By May 3, wildfires had burned more than 1.1 million acres, more than twice the number burned by that date in 2021. The unofficial wildlife season in the West typically runs from May to October, with the Southwest monsoon period kicking in around the end of August.

To forecast wildfire seasons, Paul Pastelok, AccuWeather’s head long-range forecaster, and his team looked at the weather patterns of the past fire seasons to get an idea of how the pattern may set up this year. The team also analyzed the wildfire statistics for those years as well as other factors. This season, Pastelok said, could be comparable to the wildfire seasons of 2006 and 2012; however, 2011 stood out to him the most.

“Now, 2011 had it all,” Pastelok said of how similar the weather pattern was that year was to 2022. 2011 had sea surface temperature anomalies similar to those now in the Pacific.

“2011 had the upper troughs coming into the Northwest, the storminess there into June and July late in the season, it had the wetness in the Tennessee Valley,” he continued. “So that year stuck out.”

The number of fires that burned during 2011 neared 75,000 and scorched some 8.7 million acres. While the year comes nowhere close to the top 10 wildfire seasons in terms of the number of fires, it did break into the top five seasons when looking at the total acres burned, according to NIFC data.

AccuWeather forecasters also noted that the aridification — the gradual drying out — of the West as the result of the long-term drought and climate change will only continue to heighten the wildfire threat in years to come, and 2022 will be no different.

The above-average wildfire seasons continue to serve as reminders of the consequences of the continued aridification in the region. A peer-reviewed study released in February 2022 found that the ongoing mega-drought plaguing the southwestern U.S. was the worst the region has experienced in 1,200 years.

Mean water-year precipitation across southwestern North America from 2000 to 2021 was 8.3% below the 1950-1999 average, the study found. This low precipitation coupled with above-average temperatures helped to produce the intense drought experienced by the region today. From 2000 to 2021, only 2002 was drier than 2021, highlighting just how dry 2021 was, even with its active monsoon season.

“The fact that the 2021 drought was comparable to that of 2002 is especially remarkable given high precipitation totals in summer of 2021 across much of southern [Southwest],” the authors of the study wrote.

Below-average winter and spring precipitation totals across the West did no favors to help prepare the region for warmer weather, and the rainfall and snowfall that did occur may have only added to more short-term fuel potential into the summer months, according to AccuWeather forecasters.

This short-term fuel stems from dried-out foliage across the Pacific Northwest because of a lack of precipitation leading up to the summer months and making for a higher-than-average risk.

A large portion of southern and eastern Oregon, along with portions of Idaho, recorded their driest three-month (January-March) period on record, according to the National Integrated Drought Information System, with nearly all of the southern half of the two states in the lowest 10th percentile.

Precipitation across Oregon was mostly below average, with northwestern and northeastern parts of the state serving as an exception, according to a recent National Weather Service water supply outlook.

Winter and spring brought below-average precipitation to California, with the driest January in eight years, ranking as the second-driest January on record, according to the National Oceanic and Atmospheric Administration (NOAA).

A few episodes of above-average precipitation in December and April allowed blooms to occur in the state. However, when the summer months arrive and as dry weather continues to press the region, those same blooms will dry out and add to the short-term fuel potential.

Meanwhile, the April snowstorm that dumped record-breaking snowfall totals across the northern Plains delivered the moisture at a time when it’s expected to minimize early wildfire concerns, with additional chances for precipitation and below-average temperatures through mid-May expected to stave off major wildfire concerns in the region.

A return to drier and warmer weather in June, however, could dry out foliage as the month progresses, with the threat of grassland fires increasing in late June in the region. July and August will bring more persistent dryness and above-average warmth, leading to a higher risk of grassland fires across the region.

The central and southern High Plains, however, were already experiencing an active season in April due to below-average precipitation leading into spring, along with numerous high-wind events.

A dry follow-up to the 2021 North America monsoon season has created similarly dangerous conditions and a jump-start to the wildfire season for the Southwest.

In mid-April, the National Weather Service issued a dire fire warning across parts of New Mexico, calling attention to the agency’s “confidence that a widespread extreme and potentially catastrophic fire weather event” would unfold. Later that same day, the Calf Canyon Fire began to spread east of Santa Fe amid strong winds.

Dry conditions are expected to persist into midsummer, raising the wildfire threat until the North American monnsoon season kicks in.

While the wait will be dry, La Niña conditions are expected to give a “boost” to the North American monsoon when it arrives, providing the rainfall needed to help decrease the wildfire threat.

“La Niña does actually favor the monsoon much more than El Niño,” Pastelok said, referring to the two opposing phases related to sea surface temperatures in the central and eastern Pacific Ocean. Both have far-reaching effects on weather elsewhere in the world.

He added that there are exceptions. La Niña patterns going into the summer season can be accompanied by storms moving upward toward the northeast Pacific into southwestern Canada, promoting high pressure over the eastern Rockies and Great Plains area

“So when that high gets bigger and bigger and bigger as we head toward midsummer and later summer, it forces all the mid-level water vapor that’s going across the Caribbean and the southwest Atlantic through the Gulf of Mexico and up into the Four Corners region, enhancing the monsoon,” Pastelok said.

In contrast, the El Niño phase can sometimes fumble these patterns, promoting more tropical activity in the eastern Pacific and allowing the moisture to travel into the Southwest.

With above-average precipitation from the monsoon expected by August and September, the wildfire threat should begin to decrease as it did during 2021 as a result of the active monsoon season.

While storms promise rainfall, the threat of lightning strikes igniting new fires often outweighs the possibility of any meaningful moisture during the summer months.

Half of California’s 20 largest wildfires were determined to have been caused by lightning, according to the California Department of Forestry and Fire Protection. This includes the CZU August Complex, sparked in August 2020, which currently stands as the largest fire in California’s history after it scorched more than 1 million acres in San Mateo and Santa Cruz counties, The Monument Fire and River Complex Fire from 2021 also made the list as the 14th and 17th largest in state history, respectively.

In Northern California, the threat of significant wildfires is expected to rise in July, possibly in the form of a thunderstorm complex or two targeting areas near and north of the San Francisco Bay region and points north.

Farther north in the Pacific Northwest, the risk of a thunderstorm complex during late June into July could result in above-average precipitation, according to AccuWeather forecasters, but also bring a higher risk of lightning strikes. The highest risk for thunderstorms will be in Oregon.

Wind also serves as an instigator to wildfires, tossing the sparks and fanning the flames. Santa Ana winds are one of the most well-known wind threats and typically peak between October and February.

This wind event forms when high pressure builds across the Great Basin region, around the northern Rockies, combined with lower pressure near the coast of Mexico. As the air descends through the mountains into the lower elevations in Southern California, the winds dry out the air, meaning that they not only kick up the flames but also promote low-humidity conditions where the fire can continue to rapidly grow.

With a persistent La Niña pattern this year promoting a faster upper-level jet stream, it’s also possible that the Northeast could get more smoke from these western fires, similar to what happened in 2021.

A peer-reviewed study published earlier this year found that between 2002 and 2018, the wildfires that have scorched the Pacific Northwest were altering the seasonal pattern of air pollution and causing a surge in unhealthy air pollutants in August. The researchers highlighted the increase in carbon monoxide levels during the month — a time when carbon monoxide levels have historically remained low.

While this gas generally is not a significant health concern outdoors, it indicates the presence of more harmful pollutants such as aerosols and ground-level ozone, according to the study. When the research team compared observations across the Pacific Northwest, the central U.S. and the Northeast, they found that the increase in carbon monoxide held true across the entire nation for the month of August, posing potential health risks due to air pollution.

Usually, as the smoke moves away from the fire, it’s lofted into the higher altitudes of the atmosphere and carried by the jet stream. There have been plenty of hazy orange sunsets in the Northeast prompted by Western wildfires, but the pollutants at higher altitudes aren’t necessarily immediately harmful, as the pollution isn’t being breathed in by people at ground level unless it’s pushed back to the surface.

Because of the doggedness of the La Niña phase this season, Pastelok said, combined with a faster upper-level jet stream, there’s a higher chance people could see wildfire “smoke spreading across the nation at times, even coming down from Canada as well.”