Up On The Roof: Rickshaw Driver Finds Unique Way To Beat Heat In New Delhi

A “moving garden" offers respite from temperatures above 100 degrees F in the Indian capital.
By Mary Gilbert May 6, 2022
Facebook
Twitter
Linkedin
Email 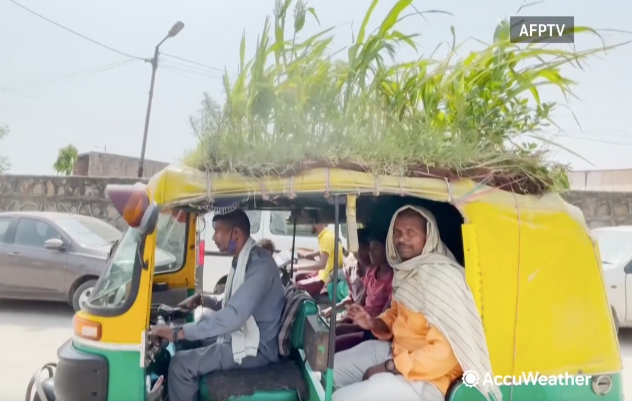 Plants growing on top of an autorickshaw in India in an attempt to create a natural air conditioner. (AFPTV)

The country endured the warmest March on record, and the heat didn’t let up in April as multiple lengthy and dangerous heat waves gripped the nation.

In the midst of early-season heat waves, some residents found creative ways to keep themselves and their customers cool.

Mahendra Kumar, owner of the so-called “moving garden,” an autorickshaw with a living, green roof. Autorickshaws, the motorized versions of the popular human-powered, pulled or cycle rickshaws, are a staple in New Delhi, India’s capital. Rickshaws are smaller modes of transportation that allow drivers and passengers alike to zip through crowded city streets.

This rooftop garden on wheels comprises more than 20 varieties of shrubs, crops and flowers. The plants on Kumar’s rickshaw keep direct sunlight from radiating intense heat straight onto the roof. The plants soak up the sunshine and photosynthesize, generating oxygen while also reducing temperatures in the immediate vicinity.

This green rooftop helps to create essentially a “natural air conditioner” for passengers, Kumar told AFP via a translator. Kumar’s passengers are normally happy to see the plants atop the vehicle, he said.

High temperatures in New Delhi jump to just over 100 F by the end of April and remain at or above that level through the middle of June. Once monsoon season kicks in, typically in June, average temperatures dip only slightly, while rainfall increases dramatically.

During the most recent heat wave in the nation’s capital, air temperatures soared to or just above 110 F (43 C) for at least three days straight. Heat at this level has been shown to occasionally be intense enough to melt tar on roads.

On Saturday, April 30, New Delhi hit 112 F, the highest temperature of the entire month, but fell just shy of the city’s all-time record for April. The all-time record high temperature for April in New Delhi is 114.1 F (45.6 C), according to Jason Nicholls, AccuWeather senior meteorologist and lead international forecaster.

The end of April wasn’t the only portion of the month during which abnormal heat was widespread.

March of 2022 was the hottest March for India as a whole since 1901, according to meteorologists from the India Meteorological Department (IMD). When averaged across the entire country, March’s average high temperature was an astonishing 3.35 F (1.86 C) above the climatological average.

A brief reprieve from the heat has unfolded during the first days of May, and conditions have begun to trend closer to normal. However, AccuWeather forecasters caution that the brief break in stifling heat may be short-lived.

Forecasters are monitoring atmospheric signals for another prolonged stretch of above-average heat to set up, especially across western and northern portions of the country, this weekend through at least the middle of next week.

«Previous Post
US Wildfire Forecast: Drought To Spur Another Intense Season»Next Post
Eye Don’t Believe It: Woman Scoops GBP 1.6M On Scratchcard She Bought Because It Was Pretty