Scientists participating in the study were also able to determine how profound the changes were.
By Thomas Hochwarter May 6, 2022
Facebook
Twitter
Linkedin
Email 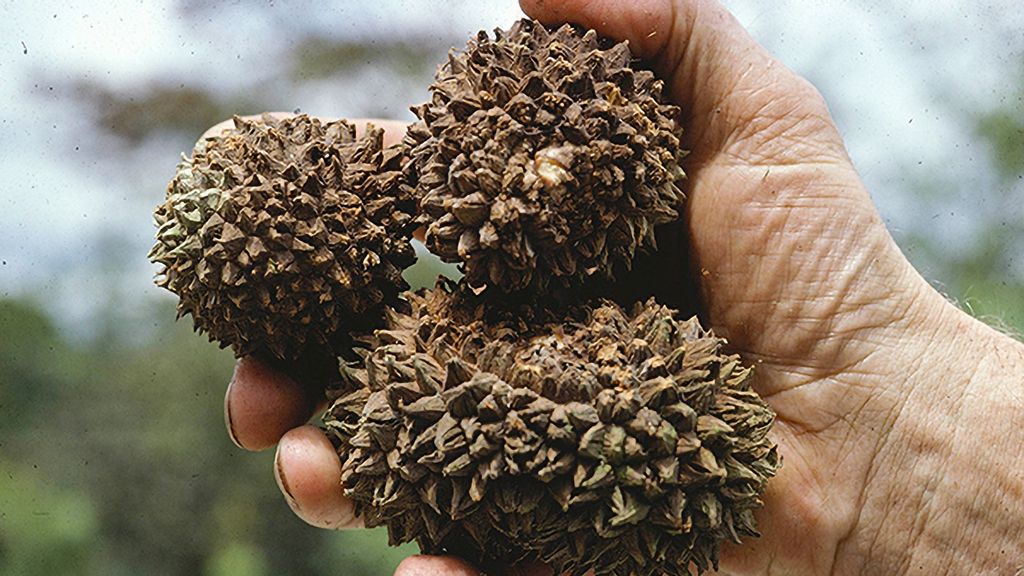 The large, woody fruits of the Manicaria saccifera palm that depend on large animals for their dispersal. (John Dransfield, Royal Botanic Gardens, Kew/Zenger)

The extinction of dinosaurs had a significant impact on the development of plants, a new study has shown.

Experts at the German Centre for Integrative Biodiversity Research (iDiv) in the cities of Halle, Jena and Leipzig and at Leipzig University discovered that the absence of large herbivores for around 25 million years dinosaurs were wiped out substantially slowed the evolution of new plant species.

The size of some fruit increased while their defensive features such as spines regressed.

The research has demonstrated this using palm trees as a model system.

Scientists participating in the study were also able to determine how profound the changes were.

Even the reappearance of large herbivores millions of years later such as ground sloths, elephants and rhinos could only partially influence the changes that had already taken place.

The study – which has been published in the journal Proceedings of the Royal Society B – provides a view of the geological past and, at the same time, promotes a better understanding of the consequences of current extinction processes.

With the extinction of large, non-flying dinosaurs 66 million years ago, large herbivores were missing on earth for the following 25 million years. Scientists at iDiv and Leipzig University aimed at finding out how this very long absence and the later return of the so-called megaherbivores affected the evolution of plants.

The research team analyzed fossil and living palms today. Genetic analyses enabled scientists to trace the evolutionary developments of plants during and after the absence of megaherbivores.

They first confirmed the common scientific assumption that many palm species at the time of the dinosaurs bore large fruits and were covered with spines and thorns on their trunks and leaves.

However, the research team found that the ‘evolutionary speed’ with which new palm species with small fruits arose during the megaherbivore gap decreased, whereas the evolutionary speed of those with large fruits remained almost constant.

The size of the fruits themselves also increased. The study shows that there were palms with large fruits – even after the extinction of the dinosaurs. Significantly smaller animals were apparently able to eat large fruits as well and spread the seeds with their excretions.

She explained: “We were thus able to refute the previous scientific assumption that the presence of large palm fruits depended exclusively on megaherbivores.

“We, therefore, assume that the lack of influence of large herbivores led to denser vegetations in which plants with larger seeds and fruits had an evolutionary advantage.”

However, the defense traits of the plants; spines and thorns on leaves and stems, showed a different picture. The number of palm species with defense traits decreased during the megaherbivore gap.

Onstein said: “Defence traits without predators apparently no longer offered evolutionary advantages. However, they returned in most palm species when new megaherbivores evolved, in contrast to the changes in fruits, which persisted.”

With their work, the researchers shed new light on evolution and adaptation during one of the most enigmatic and unique periods in the history of plant evolution during and after the extinction of megaherbivore.

Understanding how megaherbivore extinctions affected plant evolution in the past can also help predict future ecological developments. The authors have noted the loss of traits during the megaherbivore gap. This loss can affect important ecosystem functions such as seed dispersal or herbivory.

The ongoing extinction of large animals due to hunting and climate change may also affect trait variation in plant communities and ecosystems today and in the foreseeable future.

Dinosaurs were a diverse group of reptiles that first appeared during the Triassic period between 243 and 233 million years ago. The exact origin and timing of the evolution of dinosaurs is the subject of research.

They became the dominant terrestrial vertebrates after the Triassic-Jurassic extinction event 201 million years ago. Their dominance continued throughout the Jurassic and Cretaceous periods.

The first dinosaur fossils were recognized in the early 19th century, with the name ‘dinosaur’ – meaning ‘terrible lizard’ – being coined by the English biologist and paleontologist Sir Richard Owen in 1841 to refer to these ‘great fossil lizards.’

Since then, mounted fossil dinosaur skeletons have been major attractions at museums worldwide, and dinosaurs have become an enduring part of popular culture.