Stace hopes to travel to London for stem cell treatment which she believes could finally cure her but it will cost around £30,000.
By Anamarija Brnjarchevska May 5, 2022
Facebook
Twitter
Linkedin
Email 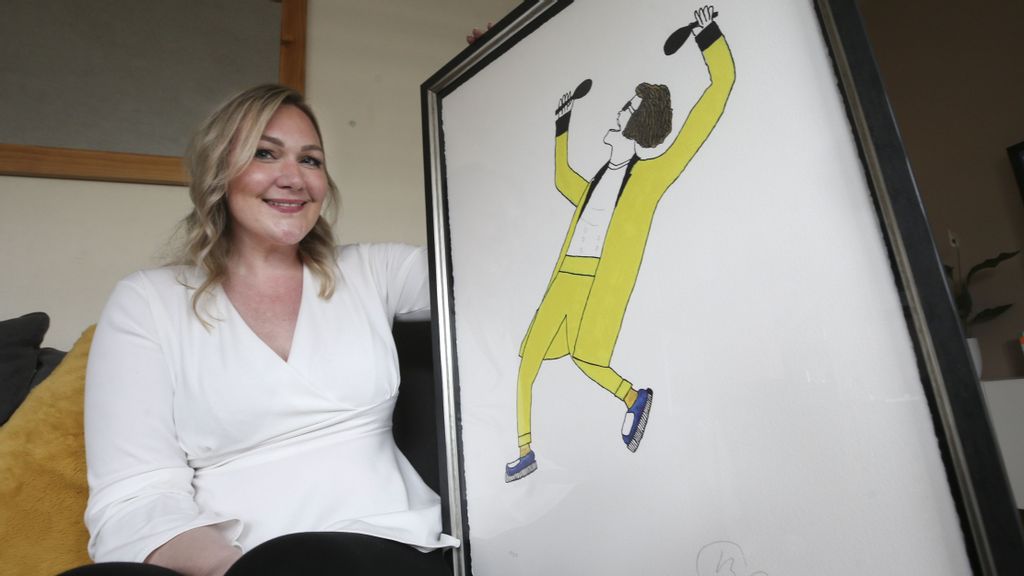 A woman who has battled cancer five times was stunned to be gifted a painting by Sir Billy Connolly - which she plans to sell to pay for treatment. (Newsquest Glasgow Herald/Zenger)

A woman who has battled cancer five times was stunned to be gifted a painting by Sir Billy Connolly – which she plans to sell to pay for treatment.

Stace O’Brien, 38, was first diagnosed in 2012 but suffers from Li-Fraumeni syndrome, a genetic condition increasing her chances of getting cancer.

She described her treatment as “non-stop” and said the illness makes her feel “100 years old”, after medics found cancer in her bones, breasts, lymph nodes, and sarcoma in her leg.

Stace hopes to travel to London for stem cell treatment which she believes could finally cure her, but it will cost around £30,000.

The painting shows a figure dressed in a yellow suit and blue shoes clutching a pair of maracas, and was accompanied by a message which said “We would gladly donate one of Billy Connolly’s hand-signed limited editions for you to sell, to help raise money for Stace’s treatment.”

Stace, from Glasgow, said: “The treatment is shrinking my cancer, there is hope.

“It is so nice having a Sir Billy Connolly painting in the house that he gave to me.

“I’ve hung it on the wall just now so I can enjoy it until it sells, it is so amazing.

“I need to get it auctioned soon so I can get a treatment that may work and be painless.

“I’m really struggling with severe pain, I am in agony.

“I feel so broken. I don’t know anyone else who has survived cancer five times but I’m hoping I will.”

Stace was first diagnosed with osteosarcoma bone cancer after suffering a burning pain in her hip which was revealed to be a tumor in January 2012.

She underwent grueling chemotherapy and thought she was in remission for five years before finding a lump in her breast in February 2019.

She also underwent a double mastectomy and reconstruction surgery to tackle the illness but tragedy struck again in December 2019 when doctors found Lymph Node cancer.

Stace was then diagnosed with Sarcoma in her leg in February 2021 and underwent four surgeries to tackle it.

Then last October she was diagnosed for the fifth time, as doctors found her breast cancer had spread to her chest wall, behind her heart and liver.

Earlier this year doctors found more cancer in her bones but Stace is determined to keep fighting.

Thankfully her cancer is now starting to shrink as she undergoes Exemestane, zoladex and phesgo treatment on the NHS.

But the aggressive treatment has left her in excruciating pain and in tears every day leaving her desperate to get the stem Dendritic cell therapy that could target her illnesses “pain free”.

To make the vaccine, scientists grow dendritic cells alongside cancer cells in the lab.

The vaccine then stimulates the immune system to attack cancer.

It comes after previous attempts to cure her condition left her infertile, temporarily blind, numb in her limbs and struggling to swallow.

Stace said: “I’m happy the new drug is helping but I’m in so much pain in my bones and joints I cry most days.

“It’s so painful I’m really not well with it although I got my results through and the cancer is shrinking which is a miracle.

“I’m even up every night taking pain medication at 3 am but it’s just getting worse.

“I’ve been totally devastated by the treatments for my cancer, the effects of treatment can start to compromise my life so badly.

“I’m actually desperate for the doctors to stop this pain no matter what it takes.”

“I’m so touched by my friends doing all this and wanting me to live.

“If we get more money from the fundraising then I will use it to start a support center to help young newly diagnosed women learn how to cope with it.

“I really missed a place like this and think there is a real need for it.”