Anna Chugai said that that attack destroyed their house, and left 47 dead even though her mother thankfully survived.
By Darko Manevski May 5, 2022
Facebook
Twitter
Linkedin
Email 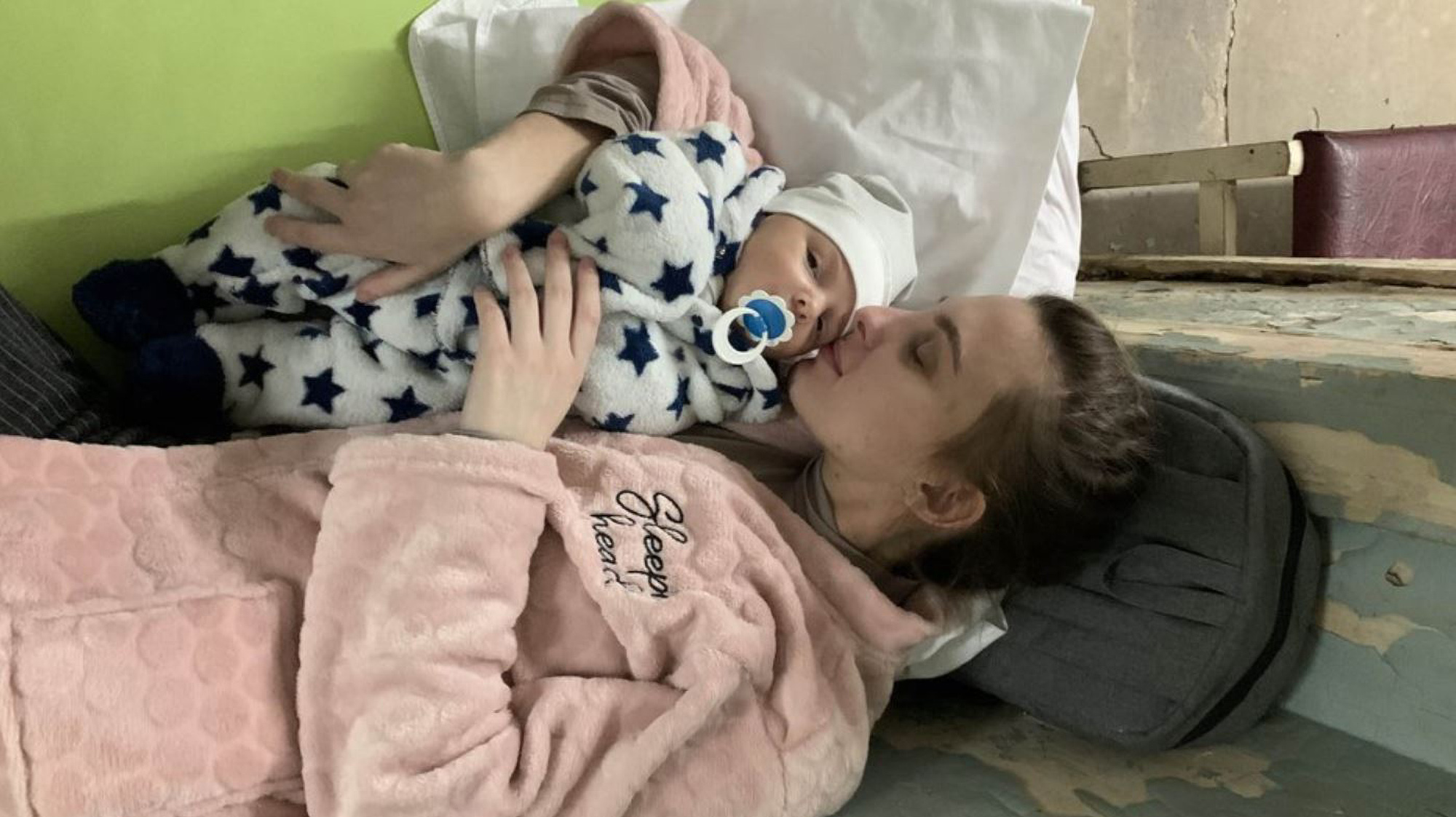 Anna Chugai with her baby hiding during the bombing of Chernihiv, Ukraine, in April, 2022. (Anna Chugai/Zenger)

A young mum who endured 21 days of bombing and fighting in a cellar with her newborn son has said she will not be forced out of Ukraine as long as her husband is still there.

The young mum, Anna Chugai, who was trapped in the cellar in the besieged city of Chernihiv said that looking back on what should have been one of the happiest times in her life now only brings her to tears.

She said she and her husband had worked hard to get their house, and never dreamt they would lose everything they owned apart from the clothes they were wearing in a war. But at least they were alive.

In an interview with Zenger News, she said: “I still can’t believe we survived, some of the explosions were so bad, on one occasion my mother was hit when we were attacked by enemy helicopters and she was batted around like a ball, but thankfully she survived. She had been knocked unconscious, but if she had survived and gone onto the flat she probably would have been killed.”

She said that that attack destroyed their house, and left 47 dead even though her mother thankfully survived.

She said: “I’m just glad that my son is doing well now, 21 days in the basement did not affect him long-term it seems.

“When we were in the cellar my husband and I were very stressed, and I think he picked up on that and was very upset too. He couldn’t stop crying, and we couldn’t calm him down. It was also difficult for us all to sleep. But as soon as we managed to get out, all these problems disappeared for him.”

But she said that despite the ordeal, she and her husband planned to return with their son to Chernihiv.

She said: “I don’t want to go abroad alone, I only want to go if I can go with my husband. I don’t want him to miss all the wonderful early moments with our son as he grows up. He will only be this small once, and this time should be some of the best moments in life. Families should be together and I won’t let them force us apart.”

Her son Danylo had been born 29th of January, and speaking of those early days she said: “We enjoyed life and had every reason to believe we had a bright future. Then in a flash, everything vanished. I will never forget waking up on February 24th in the night to feed my son and hearing explosions.

“I had no idea this was the beginning of the end, and that a full-scale war was beginning. I actually went back to bed, and only in the morning did I then find out that we had been attacked by Russia. Then the bombings did not stop.”

Fearful for their baby, the couple had taken some meager possessions and moved into the basement at her mother’s flat. Her mother would leave the flat once a day to prepare food in the flat above which was when she was caught in the helicopter attack.

She said in the first few days it was not so bad, even if they had lost their home because they were in the cellar where they had water and light and an electric stove to cook with. But when the Russians destroyed the power supply, they couldn’t even warm up the baby food. She said they would pour water into a tin can and hold it over a candle if only to heat it a little bit. She said when she looked at her baby she would burst into tears, worrying about the effect on him.

She added: “However every time we tried to leave, we heard the helicopters and were forced to rush back into the basement.”

After 21 days they decided they would just get into a car and leave because they were certain if they remained they would die. The bridge had been destroyed so they had to drive through fields and eventually made it to the Khmelnytskyi region where people that had followed her story on social media provided her with a safe place to stay.

But she was still desperately worried about the friends and family she left behind. She said: “The pain is great and I feel so helpless.”