Police video footage of the chase shows the driver roaring away at 70mph after being stopped by officers.
By Lee Bullen May 5, 2022
Facebook
Twitter
Linkedin
Email 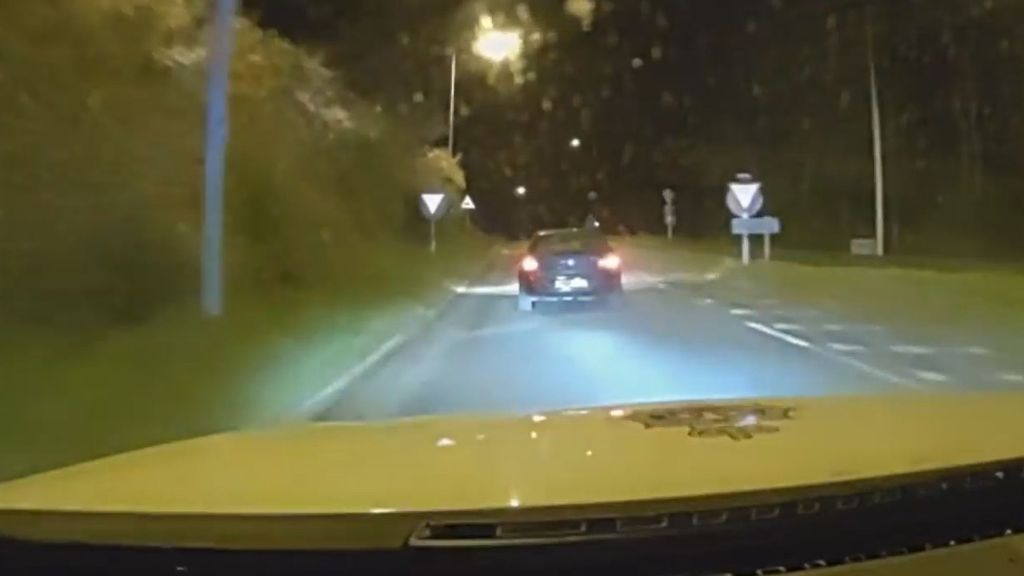 A dangerous driver has been jailed after ramming three police cars during a high-speed chase.

Police video footage of the chase shows the driver roaring away at 70mph after being stopped by officers.

As he races through narrow streets two of his tires are already shredded by a police stinger and the car is left running there just on its wheel rims.

The Heddlu Dyfed-Powys Police said in a statement on 3rd April: “A driver who pulled off from police, crashing into their car, before leading a 20-mile chase which ended when his car had been stung and his front wheels were down to the rims, has been jailed for 14 months and had his car taken off him.

“Officers pulled Jamie Adams’ black BMW 1 Series over on the eastbound carriageway A477 in between the Amroth and Stepaside turn off shortly before 2 am on Tuesday, 12 April 2022.

“Adams, aged 31, from Kimberley Terrace, Georgetown, Tredegar, initially complied. But when officers spoke to him through his open door and questioned him about drug use because of the smell of cannabis coming from his car, Adams started his engine and drove off, almost dragging an officer along, and crashing into a police car, before speeding off.

“Officers followed and were taken on a 20-mile chase, with Adams hitting 100mph on the A477, before turning off and driving through country lanes in the Llanteg, Red Roses, and Pendine areas.”

The police said an attempt to stop the suspect’s car was unsuccessful and ended with his reversing into a cop car and speeding off.

He drove east and the police were able to deploy a stinger in Lower St Clears.

The police stated: “Adams continued to speed after being stung, hitting 70mph in a 30mph zone.

“An officer on the road ahead attempted to slow Adams down and stop him, but he drove into the car, again driving off.

“With his front wheels deflating, Adams continued to speed on, joining the A40 and heading for Carmarthen.

“With officers in pursuit, Adams turned into Bancyfelin, where his first front tire came away from the car. Undeterred, Adams continued through the village, where his second front tire was lost.

“Down to the rims, Adams continued, re-joining the A40 and heading east.

“At this stage, the officers planned a stop tactic, which was executed shortly after the Tenby Road Filling Station, when Adams was arrested for dangerous driving, among other charges.”

After pleading guilty to dangerous driving, Adams was sentenced at Swansea Crown Court on 29th April.

Roads Policing Officer, PC Robin Benbow, said: “Adams drove dangerously and at speed with no regard for the safety of anyone else who may have been on the roads.

“He routinely swerved to prevent officers overtaking and carrying out maneuvers to bring him to a stop and damaged three police vehicles in his desperate attempts to evade arrest.

“Even when his tires had been taken out, he tried to get away, and continued to drive at speed.”

As well as being jailed for 14 months, the defendant was also disqualified from driving for four-and-a-half years and will need to take an extended driving test.