Zenger News obtained the footage from the Ministry of Defence of the Russian Federation on Thursday, 5th May.
By William McGee May 5, 2022
Facebook
Twitter
Linkedin
Email 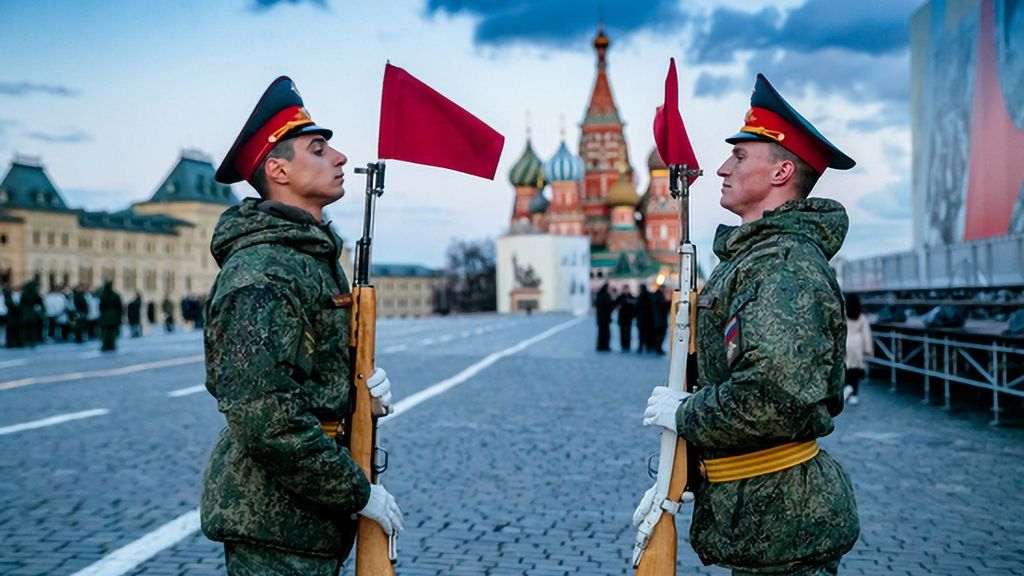 The second night training for the Russian military parade on 9th May, at the Red Square, in Moscow, Russia, on 5th May. (Ministry of Defense of the Russian Federation/Zenger)

Chilling rehearsals for Moscow’s WWII Victory Parade are underway as Russian troops come under growing pressure to end the Mariupol siege to prove its military might.

Russian army units have been flooding into Moscow for run-throughs of the May 9th ceremony in which the Kremlin displays its firepower.

Videos of the latest rehearsal show Russian soldiers goose-stepping through the Moscow streets while Soviet-style red flags flutter from tanks.

As solemn orchestral music plays, the troops march with mechanical precision in the shadow of Communist-era symbols.

Zenger News obtained the footage from the Ministry of Defence (MoD) of the Russian Federation earlier today (Thursday, 5th May).

The Russian MoD said (in Russian): “Today, the second-night rehearsal of foot ceremonial crews and a mechanized column of the military parade dedicated to the 77th anniversary of victory in the Great Patriotic War took place on Red Square.”

Fears are rising ahead of Victory Day because Russia may choose to mark the occasion by escalating its invasion of Ukraine.

The day commemorates the defeat of Nazi Germany in World War II in 1945.

Russia claims this was solely down to the Soviet Union – which lost more than 24 million in the conflict – without acknowledging Britain, America or other Allied forces.

Current Western leaders fear Russian President Vladimir Putin will use the event to declare the invasion of Ukraine a full-scale war.

UK Defence Secretary Ben Wallace has previously warned: “I think he will try to move from his ‘special operation’.

“He’s been rolling the pitch, laying the ground for being able to say, ‘Look, this is now a war against Nazis, and what I need is more people. I need more Russian cannon fodder.'”

The Kremlin first claimed its “special military operation” was necessary to “demilitarise and denazify” Ukraine, but it has lately been saying its goal is to “protect Donbass”.

US State Department spokesman Ned Price said: “I’ve seen the speculation that Russia may formally declare war. I suppose I would add that that would be a great irony if Moscow used the occasion of Victory Day to declare war.”

Ukrainian member of parliament Dmytro Gurin said his country was bracing for major action by Russia on 9th May as it aims to “destroy Ukraine”.

The MP added: “They need to show something for their population.”

Despite fears of a Russian escalation in Ukraine, the invading forces are believed to have suffered heavy losses over the course of the ongoing invasion.

The General Staff of the Armed Forces of Ukraine (AFU) reported earlier today that about 24,700 Russian troops had been killed thus far.