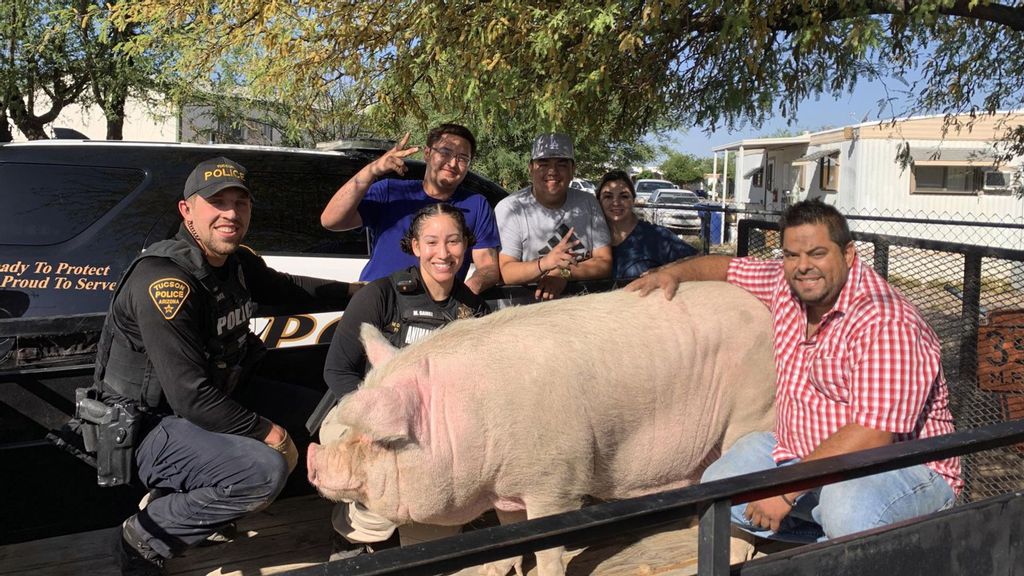 Construction workers used tractor to wrangle 400-pound pig named Rosalia that was trying to cross a street in Tucson, Arizona in May 2022. (@PimaAnimalCareCenter/Zenger).

Police detained a runaway 400lbs pig after it escaped from its enclosure to roam a city’s streets.

The giant sow was spotted trying to cross a road in Tuscon, Arizona, USA, by amazed construction workers on May 2.

Porky Rosalia – as she’s known to her owners – was followed by the builders on a construction vehicle and managed to corral her until police and animal experts arrived.

The Pima Animal Care Center said members attended the scene along with Tucson cops to help detain the fugitive sow.

They explained on 2nd May: “Why did the pig cross the road? It got a ticket for running a Slop Sign. Ok, jokes aside.

“Around 6 am this morning, near the 5000 block of South Campbell Ave, construction workers observed a large pig attempting to cross the road.

“They contacted us and the Tucson Police Department (TPD).

“While awaiting a response, they used a tractor to follow and corral the pig near a bus stop at the intersection of S Campbell Ave & E Wyoming St.

“TPD units arrived and used their patrol vehicles to better corner the animal.

“The owners arrived and with everyone’s help they were able to safely load the pig.

“She broke out of her pen before they were able to transport her.

“TCC 4-26 states that it is unlawful to keep, raise, or feed pigs inside of city limits with exemptions for purebred Vietnamese Pot Belly pigs (Sus Bittati).

“Big shout out to the construction workers for their quick thinking, the officers for assuring public safety, and the owners for taking action to resolve the issue in a timely manner!”

The animal center added: “Did you hear about the piglets who wanted to do something special for Mother’s Day?

“They threw a sowprize party. Ok, ok. THAT was the last one, promise!”

Cops also posed for pics with the prize porker after rounding her up, including the job of loading her onto the truck to be transported back home.

It is believed she was kept as a pet and not to be turned into a meal eventually, and it was not revealed where the pig’s owners managed to rehouse her in order to meet the city rules.