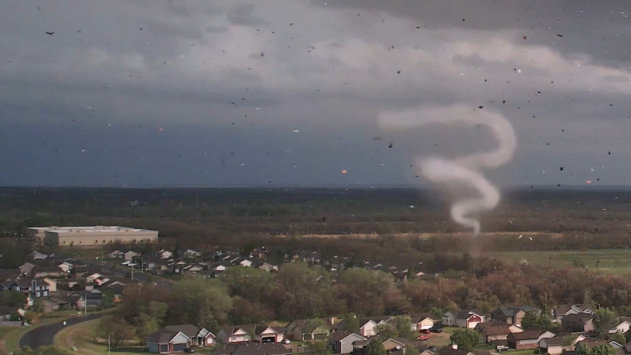 A powerful tornado tore through the small Wichita suburb and destroyed everything in its path.

The tornado was given a preliminary EF3 rating by the National Weather Service, a trait it shares with another infamous tornado that struck the same town 31 years ago.

Jonathan Porter, AccuWeather chief meteorologist, noted the similarity between the visuals of both storms. The 2022 tornado was recorded from nearly every angle by professional storm chasers and those with a smartphone.

Perhaps the defining video clip of the twister was a drone shot captured by extreme meteorologist Reed Timmer. It showed the storm’s formation and then its raw power as it sucked the roofs of houses into its funnel cloud and then spit them out in all directions.

Despite the 1991 tornado occurring well before the rise of the digital age, many videos shot on camcorders documented the wrath of what was an F5 twister that brought death and destruction to Andover and the surrounding area.

Storms developed on the afternoon of April 26, 1991, from central Oklahoma to central Kansas, resulting in a major severe weather outbreak. More than 50 tornadoes were reported across six states that day, including the notorious F5 tornado that hit Andover.

The F5 tornado touched down at 5:49 p.m. to the east of Clearwater and remained on the ground for more than an hour, striking multiple populated areas, such as Haysville and McConnell Air Force Base, before reaching Andover. Nine major facilities at the base were damaged or destroyed by the tornado, causing what then amounted to $62 million in damages, according to NWS, the equivalent of about $132 million in 2022.

After causing damage to the base, a tornado warning was issued for Andover about 13 minutes before the twister made a direct hit — but the tornado sirens failed to activate. In response, police drove to a mobile home park in Andover to warn residents to seek shelter from the incoming tornado.

About 10 minutes after police drove to the mobile home park, the tornado hit the south portion of the city. The mobile home park took a direct hit from the violent F5 tornado, leveling or destroying 84 percent of the homes in the park. The tornado remained on the ground and continued tracking to the northeast for the next 25 minutes, impacting the outskirts of Towanda before dissipating west of El Dorado.

In total, the 1991 tornado in Andover ripped through a 46-mile path and grew to more than 400 yards wide, according to Tornado Archive. Throughout Kansas, 19 other tornadoes touched down that day, including an F4 that carved a 25-mile path of destruction that included parts of Winfield, which is about 30 miles southeast of Andover.

In south-central Kansas, more than 1,700 homes were damaged or destroyed as a result of these storms. Nearly 300 people were injured from the tornado outbreak, and 19 were killed, including 13 from the mobile home park.

It would take years to rebuild from the 1991 destruction and 31 years later, nearly to the exact date, the city was forced to pick up the pieces from another powerful tornado.

Shortly after exhibiting a “corkscrew vortex,” a strong tornado began to destroy parts of Andover, damaging more than 1,000 buildings and creating a nearly 13-mile path, according to a preliminary survey result conducted by the NWS office in Wichita. The tornado was on the ground for 21 minutes and was rated an EF3 with maximum wind speeds of 155 mph.

As the tornado moved through Andover, the Dr. Jim Farha YMCA center in town sustained a direct hit, resulting in significant damage. Cars were tossed and piled up against each other as the twister continued its path into the residential area of Andover.

Multiple homes suffered significant damage in the area and 300 to 400 were destroyed, according to Andover Fire Chief Chad Russell. There were no fatalities and only four minor injuries from the 2022 tornado, a significant and positive contrast to what happened in 1991.

“We still have scars from the 1991 [F5 tornado]. I’m so thankful this tornado was not as bad as that, but we will literally be doing this for years,” Russell said of the recovery and rebuilding effort, according to The Associated Press.

Although still destructive, the 2022 tornado had peak winds of more than 100 mph less than the 1991 tornado. The 2022 event also damaged fewer homes and had a significantly smaller damage path.

While the path of the tornado in 2022 was shorter and mostly to the east of the one in 1991, the two paths did cross in a rural area to the northeast of Andover, about 3 miles south of Benton, Kansas.

One Andover resident was impacted by both tornadoes. Mike Wilson lived in nearby Augusta in 1991 and drove to his family’s home in Andover after the tornado ravaged the area, he told KWCH.

“If I didn’t know where my mom and dad had lived, I would have never known because it was one pile of rubble after another in 1991,” Wilson told KWCH.

In 2022, Wilson was playing video games when he saw the tornado forming and spinning debris, prompting him to seek shelter with his family and pets. His home was damaged by the tornado, the garage completely destroyed.

Since 1991, much has changed with how tornadoes are spotted and warned by the NWS. Technological improvements gave meteorologists a better look at where the tornado in 2022 would track and where to issue tornado warnings.

In 1991, the National Weather Service (NWS) was still using the Weather Surveillance Radar 1957 (WSR-57) to detect storms in most offices, including Wichita. The WSR-57 was the first modern radar, but only had coarse reflectivity and no velocity data, which limited the ability to forecast tornadoes.

Better radar technology was being tested in 1991, including the WSR-88D, which provided Doppler capabilities. The WSR-88D added Doppler technology, which allowed storms to be observed in slow motion and include velocity, providing the ability to better detect tornadoes.

The NWS office in Norman, Oklahoma, which is located just to the south of Wichita and in range of the area, had access to the WSR-88D for testing purposes during the 1991 outbreak. This allowed a new look into how tornado storms develop on Doppler.

These radars are still used by the NWS today, but further enhancement over the years has provided better methods to forecast tornadoes. In 2008, WSR-88D radars around the country were upgraded to increase the resolution of data. A few years later, dual-polarization was added to radar sites, an upgrade that gave them the capability to better distinguish types of precipitation and remove non-weather artifacts.

During the April 29, 2022, tornado outbreak, these features helped meteorologists warn residents of possible tornadoes before they were confirmed. However, a unique circumstance caused the Andover tornado to be hidden from the radar.

The storm cell that produced the tornado was known as a low precipitation (LP) supercell, meaning there was little to no precipitation involved with the cell. This caused the radar to have trouble detecting the cell before the tornado formed.

Despite the radar having trouble picking up the tornado, an unusually high cloud base made it visible from far away.

Tornadoes most often form in environments where cloud bases are under 1,000 meters, or about 3,000 feet, above ground level. But the Andover tornado formed at a cloud base between 1,250 and 1,500 meters — around 4,500 feet up. This caused the tornado to be visible for many miles around the circulation, according to Putnam.

“The higher the cloud base, the harder it is for the funnel to connect all the way from the parent cloud to the surface of the Earth,” Putnam said.

In contrast, the 1991 F5 tornado was what Porter described as a “classic stovepipe tornado.” Another commonality the two twisters shared: Neither was rain-wrapped, which also contributed to the storms’ remarkable visibility, Porter said.