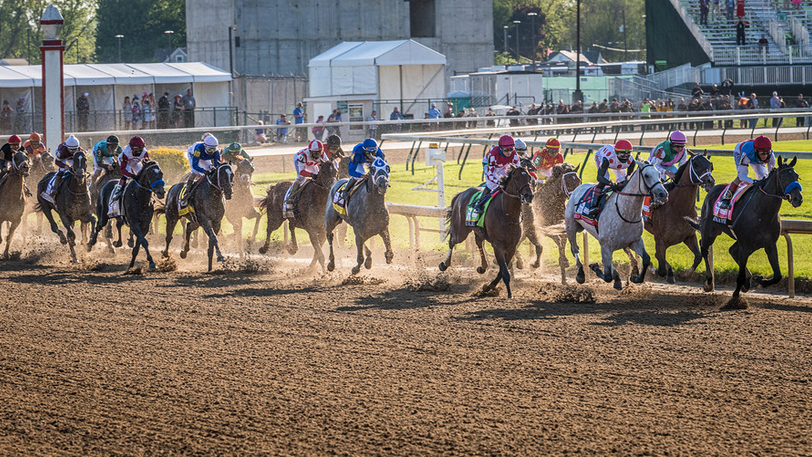 A colorful image of the Kentucky Derby in 2021, with the horse Medina Spirit leading. This year's “Run for the Roses” is likely to be a soggy affair. (Flickr/Don Sniegowski)

One of the biggest events in horse racing gets underway this weekend as riders take to the track at the iconic Churchill Downs in Louisville, Kentucky, for the 148th running of the Kentucky Derby.

As jockeys, horses and spectators prepare for the hotly anticipated event, AccuWeather forecasters say Mother Nature may shake up the odds.

“There’s a traffic jam setting up in the atmosphere later this week, and that will slow the forward progress of a storm system moving through the Ohio Valley around the time of the Kentucky Derby festivities,” AccuWeather meteorologist Reneé Duff said.

While the Derby itself lasts just two minutes, the anticipation for the event remains high throughout the year and gives way to an entire weekend of festivities. The threat of rain raises serious concerns for competitors, fans and ground crews alike.

“It’s looking nearly certain that a thorough soaking is in store for the region Thursday night into Friday ahead of the Derby’s sister race, the Kentucky Oaks,” Duff said.

The Kentucky Oaks will run this Friday, with a scheduled post time of 5:51 p.m. EDT.

“Even if rain has tapered to a few showers by race time, the track conditions overall could be quite sloppy,” Duff said.

The track at Churchill Downs is generally described as dirt, but it is actually a mixture of river sand, silt and clay, according to NPR. Despite this heartier mixture, it is still subject to the whims of wet weather.

The ground crews at Churchill Downs will have their work cut out this weekend. Rain and even a few rumbles of thunder are forecast to begin as early as Thursday night and persist through much of Friday before tapering to showers late.

“The exact speed of the storm will be key — whether wet conditions linger for Derby Day. Racegoers should plan for lingering dampness for the morning hours at least, but conditions may begin to improve as post time approaches,” Duff said.

Post time for the Kentucky Derby is set for 6:57 p.m. EDT Saturday.

What exactly are the best racing conditions for venues like Churchill Downs?

“Ideally, you’re looking for a day with sunshine and a fast track for the Derby,” Brian Thompson, AccuWeather senior meteorologist and horse-racing aficionado, said. In a race with 20 horses, a wet, sloppy track can put horses toward the back of the pack at somewhat of a disadvantage because of all the mud getting thrown up from the horses in front of them.”

The most recent Derby impacted by wet weather and a sloppy track occurred on May 4, 2019, when 0.34 of an inch of rain fell in the afternoon and early evening, according to climate data from the National Weather Service office in Louisville.

The 2018 Derby was even wetter, with over 3 inches of rainfall recorded on May 5.

“The dirt track at Churchill will dry out pretty quickly once the rain stops, so even if there is a bit of rain in the morning, chances are the track will be fast by Derby time. If the showers linger later in the day, the track could still be a bit wet for the Derby,” Thompson said.

This may be a different story for the turf track that is housed within the 1-mile oval of its more-famous dirt counterpart.

“Moisture can linger on the turf longer, so the turf course could end up a bit softer Saturday for some races leading up to the Derby,” Thompson said. “This typically helps European horses, who are more used to running on softer grass.”

Which horses may have the advantage should Mother Nature target the Louisville area? Thompson says it can be tough to determine.

“Derby horses only race a handful of times before getting to Churchill Downs, so it’s not always easy to see who will benefit from a wet track. In fact, 13 out of 20 of the horses in this year’s Derby have never raced on a wet track,” Thompson said.

“Three of the horses have won on a wet track, including the two favorites: Epicenter and Zandon.”

While the ultimate action on the track this weekend may be hard to predict, AccuWeather forecasters say one thing is certain, Mother Nature will have a say in the outcome.