In the brain, there are several dopamine pathways, of which one has an important role in reward-motivated behaviour.
By Martin M Barillas May 4, 2022
Facebook
Twitter
Linkedin
Email 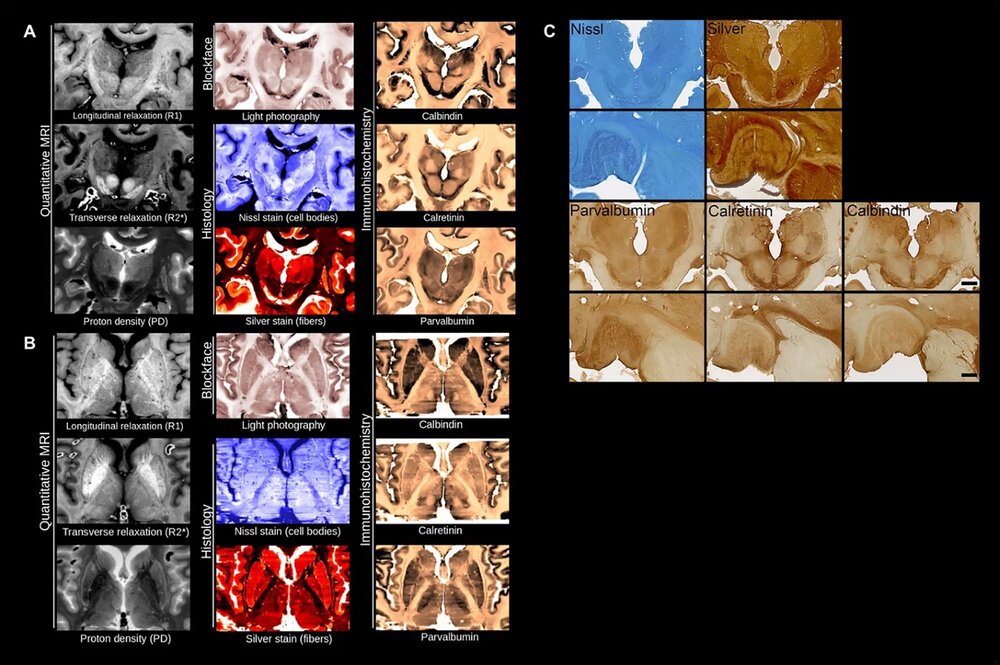 The comprehensive multi-modal dataset which offers a rich variety of views of the tissue microstructure (here with different sensitivity to nerve fibers, nerve cells and blood vessels). (MPI for Human and Cognitive Sciences, Science Advances/Zenger)

A virtual three-dimensional trips inside someone else’s head is now possible after scientists used new techniques to produce the most accurate images of the human brain ever revealed.

By combining non-invasive magnetic resonance imaging (MRI) and microscopes, a team of neuroantomists from the University of Amsterdam and the Max Planck Institute produced 3D images of two complete brains with an unprecedented level of detail.

Team member Anneke Alkemade, who is co-author of a study on the technique published in the journal Science Advances, said: “We are excited about all the possibilities this can open up for the field. Instructors can use the datasets for neuroanatomy training or virtual dissection, for example.”

She added, “And the ability to compare MRI results to individual proteins will give researchers more insight into poorly understood MRI observations and provide more anatomical details about small brain structures.

Co-author Nikolaus Weiskopf said: “It allows us to better link the MRI images to the underlying biological microstructures,”

He also added that the technique may detect dangerous medical conditions, such as Parkinson’s disease, much earlier than currently possible.

Dopamine is an organic molecule that plays several important roles in cells, including in the brain. In the brain, dopamine is a neurotransmitter—a chemical released by nerve cells to send signals to other nerve cells.

In the brain, there are several dopamine pathways, of which one has an important role in reward-motivated behaviour.

The level of dopamine in the brain increases in an anticipation of rewards, while many addictive drugs increase dopamine release or block its reuptake into neurons.

In the new study, the researchers used an MRI much more powerful than the hospital version, relying on software they developed to distinguish between living and preserved human tissue.

Each section was placed on special glass slides and processed on custom-built laboratory equipment.

After the sections were digitized, the co-authors created new algorithms to correct the tissue deformations created by the cutting and microscopy.

The researchers were rewarded, after weeks of calculations, with complete reconstructions of two individual human brains.

The data and images are now available free of charge so that people around the world can take 3D trips through reconstructed human brains.