The upcoming peak of the Eta Aquarids will occur between before daybreak on May 6.
By Brian Lada May 4, 2022
Facebook
Twitter
Linkedin
Email 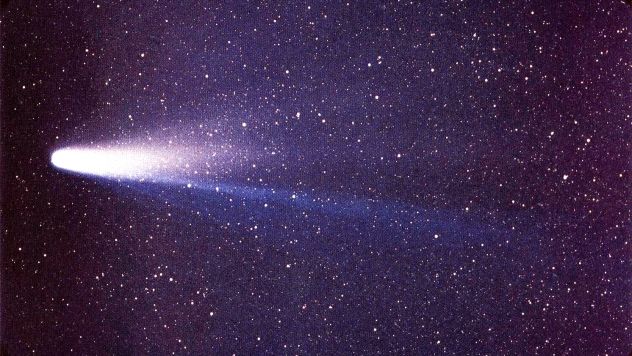 Comet P/Halley taken on March 8, 1986, by W. Liller, Easter Island, as part of the International Halley Watch (IHW) Large Scale Phenomena Network. The comet is responsible for the Eta Aquarid meteor shower, which will have peak visibility on Earth on May 5 into the early hours of May 6. (NASA)

The second and final meteor shower of spring is about to peak, and it will present a unique opportunity to enjoy the famous comet billions of miles away from Earth.

The comet responsible for the Eta Aquarid meteor shower, which peaks on Thursday, May 5 into the early hours of Friday, May 6, is Halley’s Comet.

The best window for viewing the upcoming peak of the Eta Aquarids will occur between 3 a.m. and 5 a.m., local time, before daybreak on May 6.

Most meteor showers are created when the Earth plows through a field of debris left behind by comets orbiting the sun. Most of the debris is small, generally the size of a small pebble or grain of sand. But when it hits Earth’s atmosphere, it burns up and emits a bright flash of light.

Halley’s Comet is currently more than 2 billion miles away from Earth, which is farther away than Neptune. Its most recent pass by the sun was in 1986, and it will not fly through the inner solar system again until 2061.

Viewing the annual Eta Aquarid meteor shower is another way to enjoy the comet, although seeing a shooting star is a completely different experience from spotting a comet.

A flash of light from a meteor only lasts a few seconds, while a comet can be seen for weeks, sometimes months, as it appears to slowly fly through the night sky.

The Eta Aquarid shower is best seen in areas south of the equator. In fact, it is one of the best meteor showers of the entire year for the Southern Hemisphere.

However, cloudy conditions could interfere with viewing this year’s edition of the Eta Aquarids for large areas of North America.

The best weather for the 2022 Eta Aquarid meteor shower is expected across the interior Southwest, southern Plains, Florida, northern New England, most of Quebec and into Atlantic Canada. Mainly clear conditions will lead to uninterrupted viewing of the event, although human-created light pollution could still be an issue in some areas.

Far-reaching clouds will obscure most of the sky for nearly half of the contiguous United States on Thursday night into Friday morning, including most of the East Coast, Midwest and Southeast.

Clouds are also in the forecast for the northern Rockies and the Pacific Northwest, although there could be some breaks in Washington, northern Idaho and into British Columbia, Canada.

“By May 10, hourly rates will fall below 10 per hour and will slowly fall as the month progresses,” the AMS explained.

After the Eta Aquarids come to pass, the next chance to enjoy a meteor shower will not arrive until the middle of the summer with the Southern Delta Aquarids and the alpha Capriconids. Both of these meteor showers peak on the final nights of July.

Anyone planning to watch the Eta Aquarids should be patient. Although there could be up to 30 meteors every hour on peak night, they will likely not be seen in regular intervals. Onlookers could see a spurt of four or five meteors over the span of a few minutes and then not see another for 10 or 15 minutes.

In addition, it takes 15 to 20 minutes for your eyes to completely adjust to the dark. Only after your eyes are adjusted is it possible to see dimmer meteors associated with the event. Viewers may also see satellites slowly tracking across the sky.

It is important not to look at any source of light, such as the screen of a cell phone, once your eyes have adjusted to the darkness outside.

Finally, experts recommend a wide view of the night sky. The meteors associated with the Eta Aquarids will radiate from near the constellation Aquarius, but could appear in any area of the sky. Having a wide view of the sky assures the best chance of spotting a shooting star.