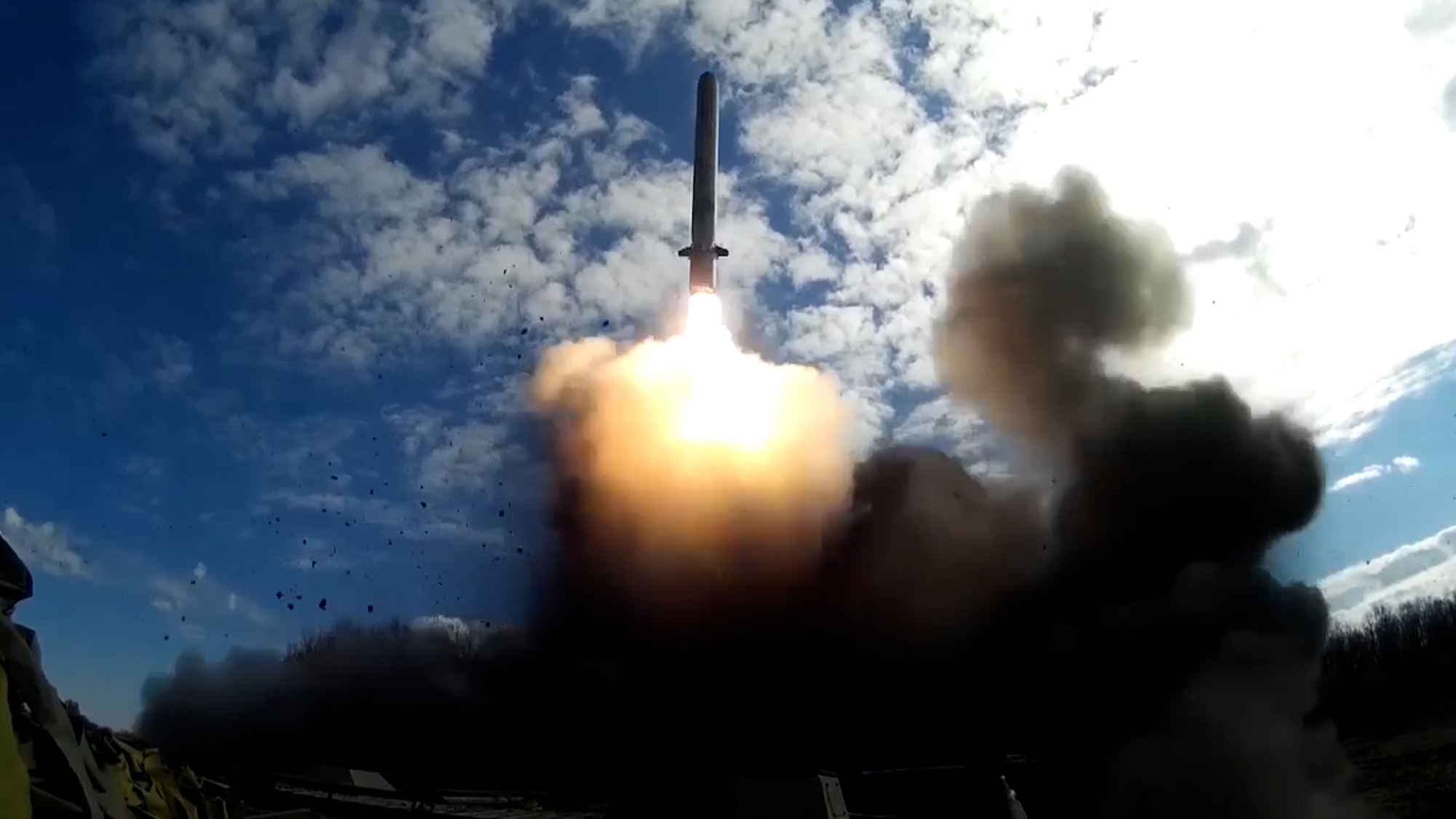 The destruction of Ukrainian military facilities by Russian high-precision air-based missiles in Ukraine. (Ministry of Defense of Russia/Zenger)

This is the moment Russian troops launch a rocket into the sky and claim to destroy a Ukrainian base in a huge fireball.

In an update on their “special military operation in Ukraine”, the Russian Ministry of Defence (MoD) said on 2nd May: “High-precision air-launched missiles hit 38 Ukrainian military facilities in a day. Among them: four command posts, 30 strongholds, areas with concentrated manpower and Ukrainian military equipment, and three warehouses with missiles and artillery weapons in the areas of Pervomayskoye and Ilyichevka.

“Also destroyed: an ‘Osa AKM’ anti-aircraft missile system and a battery of multiple launch rocket systems in the area of Arkhangelovka.

“Operational-tactical and army aviation of the Russian Aerospace Forces hit 27 strongholds, areas with concentrated manpower and military equipment of the Armed Forces of Ukraine, as well as a depot with rockets, artillery weapons and ammunition near the village of Chervonoe, Zaporozhye region. Up to 160 personnel and 26 units of Ukrainian armored vehicles were destroyed.

“During the day, artillery forces hit nine strongholds and areas of concentrated with manpower and equipment, as well as a Ukrainian battery of BM-21 Grad multiple launch rocket systems and an artillery battery in firing positions.

“Artillery units hit 26 command posts, 78 strongholds, 359 areas with concentrated manpower and equipment, and 67 artillery firing positions. Six ammunition depots, up to 280 personnel, and 43 units of weapons and military equipment of the Armed Forces of Ukraine were destroyed.

“During the day, Russian air defence systems destroyed 10 Ukrainian unmanned aerial vehicles in the areas of the settlements of Vesele, Borshchevo and Balakleya in the Kharkiv region, Kiselevka in the Kherson region, Mayak in the Zaporozhye region, Dokuchaev, Korsun and Khanzhinkovo of the Donetsk People’s Republic, as well as in the area of Luhansk City.”

The Russian MoD continued: “Two tactical ‘Tochka-U’ missiles were shot down in the area of Petrivske in the Luhansk People’s Republic and a ‘Smerch’ rocket projectile was destroyed in the Donetsk region.

“During an air battle near Slavyansk, a Ukrainian MiG-29 fighter was shot down.

“In total, since the beginning of the special military operation, the following have been destroyed: 146 aircraft, 112 helicopters, 683 unmanned aerial vehicles, 281 anti-aircraft missile systems, 2,756 tanks and other armoured combat vehicles, 316 multiple rocket launchers, 1,234 field artillery guns and mortars, as well as 2,563 units of special military vehicles.”

Meanwhile, the total combat losses of Russian troops stand at around 23,800 personnel, according to the General Staff of the Armed Forces of Ukraine.