Gerry Cameron, 10, was having a conversation with his dad Harvey Cameron, 53, about the war when he decided he wanted to help.
By Anamarija Brnjarchevska May 3, 2022
Facebook
Twitter
Linkedin
Email 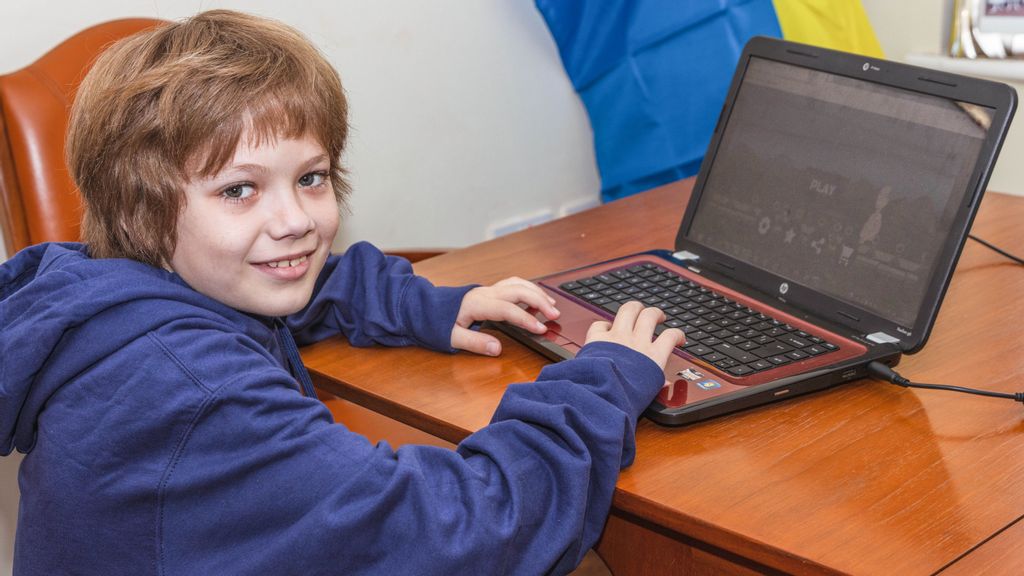 A schoolboy has created a game called Splat Putin to raise money for Ukraine - which the family say was initially rejected by Apple because it was mean-spirited. (Harvey Cameron/Zenger)

A schoolboy has created a game called Splat Putin to raise money for Ukraine – which the family say was initially rejected by Apple because it was “mean-spirited”.

Gerry Cameron, 10, was having a conversation with his dad Harvey Cameron, 53, about the war when he decided he wanted to help.

The Year Five student had been pondering on the idea of making his own app for a while, and after brainstorming a few ideas, came up with Splat Putin.

His father then got in touch with a software developer, who they met with several times a week to develop the game.

And, on April 12, after a month of hard work, Gerry was able to launch a revised version of his app on both the Android and Apple stores.

The initial plan was for an app that saw players chuck POO at Putin – which the family say Apple rejected as it was “mean-spirited”.

Gerry, from Cheshunt, Herts., said: “I love technology and gaming and I thought this would be a good time to make a game that can help people in Ukraine.

“Watching my idea for a game come to life has been a really fun experience.”

When coming up with the application, Gerry originally wanted to name the game Poop on Putin – where players would throw feces at the Russian leader.

But, after Apple said they’d refuse to launch it on their platform because of the nature of the game, he was forced to rethink.

It is alleged that the company said the theme was “mean-spirited” – which came as a surprise to Gerry and his parents.

To meet the app store’s guidelines, the schoolboy came up with Splat Putin as an alternative where players control a monkey who throws bananas instead.

After weeks of chasing Apple and jumping through hoops, they were finally able to launch the app earlier this month.

The game already has over 100 downloads across both stores, and since creating a Splat Putin Facebook page a week ago, Gerry has racked up over 10,000 subscribers.

Proud dad Harvey said: “This was all his idea we just helped him facilitate it. He really wanted to raise some money and this seemed like the best way to do it.

“His creativity has really blown us away and his determination to get the app completed and launched on the most effective platforms has been so impressive.

“We’ve had constant zoom meetings and consultations with the developer to get here but now it’s finally ready and it’s doing really well.

“I was really surprised at how hard it was to get Apple to launch it on their store, and the fact they called it ‘mean-spirited’ I found bizarre.

“If Gerry’s game is mean towards Putin, how would you describe how he is behaving in Ukraine?”

Gerry’s aim is to raise $1million for a Ukraine charity, and he plans to do that through advertising on his app and purchases.

Currently, the game is free to download, but if players want to play without advertisements, they can pay 99p to do so.

So far Gerry has raised between £600 and £1000, but he is yet to decide which charity to donate his earnings.

He has been praised at his school where students and staff have also been working together to raise money for the crisis.

Gerry said: “I have taken lots of inspiration from my favorite Youtuber Dan TDM and I think he would be impressed if he played my game.

“It seems to be doing really well which I’m very pleased about – I can’t believe I have 10,000 subscribers on Facebook.

“I have more ideas for other games in the future and I can’t wait to share them with the world.

“But at the moment I am just focusing on growing Splat Putin and earning as much as I possibly can to help the Ukrainian people.”