The footage was shot by Australian Samantha Reid, 33, who has lived in the city for 4 years now.
By Michael Leidig May 3, 2022
Facebook
Twitter
Linkedin
Email 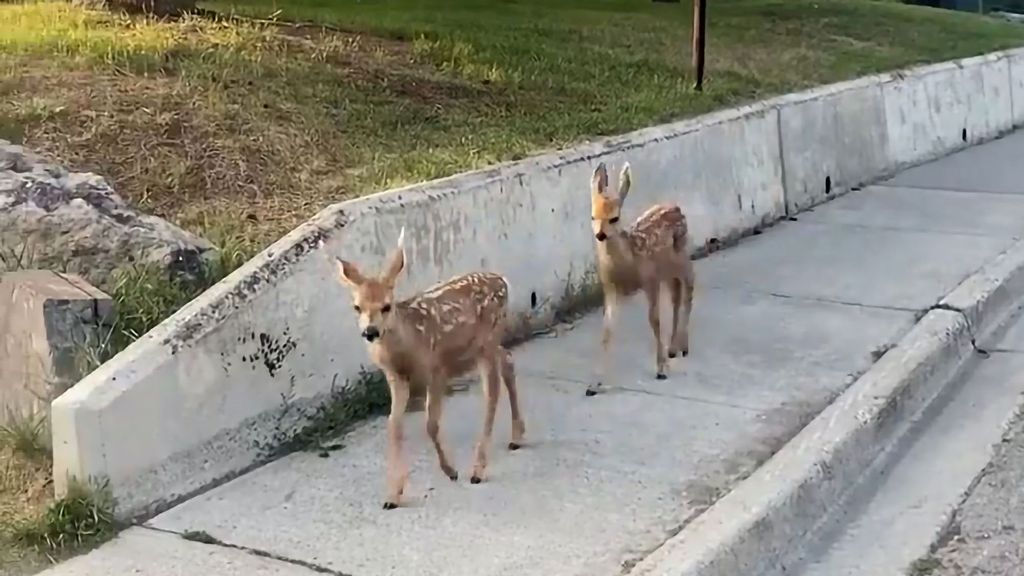 A family of deer casually walking the streets in Banff, Canada. (@earthfocus/Zenger)

This is the moment a family of deer wanders into town for a spot of sightseeing in a Canadian resort town.

The cute footage showing the mother dear with two nervous babies following behind was filmed in Banff, which is a resort town in the province of Alberta.

The footage was shot by Australian Samantha Reid, 33, who has lived in the city for 4 years now.

Samantha, who works in digital marketing, confirmed that it was taken in Banff and she told Zenger News: “The deer did go about their way safely.

“I wouldn’t say this is a regular occurrence in all of Canada but it is in Banff for sure.

“You will often see deer wandering around the streets in town.”

The surrounding 6,500 square kilometers of parkland in which the town is located are home to wildlife including elk and grizzly bears.

Samantha added: “Since the town is located in a national park there are special rules to keep the wildlife safe.

“Speed limits are 30kms/h in town. Pets must be on a leash at all times. And outside the town on the highway, there are wildlife fences in place and wildlife overpasses to ensure the wildlife is able to move safely and freely.”

The town is located within Banff National Park with spectacular views showing the peaks of Mt. Rundle and Mt. Cascade which are part of the Rocky Mountains dominating the skyline.

As a resort town, one of the main attractions is Banff Avenue, the main thoroughfare which has boutiques and restaurants mixed with château-style hotels and souvenir shops.

The park is home to two types of deer, both mule deer and the white-tailed deer that can be seen in the video.

On its website the park notes: “Smaller than mule deer, white-tail deer have reddish coats and triangular-shaped long brown tails that they hold upright when alarmed, exposing the white underside.”

They said that they wanted to catch sight of them should: “Look for them at dawn and dusk!”

Population numbers fell by 7 million from 2000 would have been increasing again since 2017 and is now considered healthy and close to pre-colonization levels on the continent.

That is in strong contrast with the 1800s and very early 1900s when they were considered close to extinction.

Although their natural predators including wolves, cougars, and Jaguars are no longer a limiting factor in their numbers, has been offset by problems with habitat loss through development and logging.