The debris is from a U.S. spacecraft — and the find will help scientists plan more landings on the Red Planet.
By Zachary Rosenthal May 3, 2022
Facebook
Twitter
Linkedin
Email 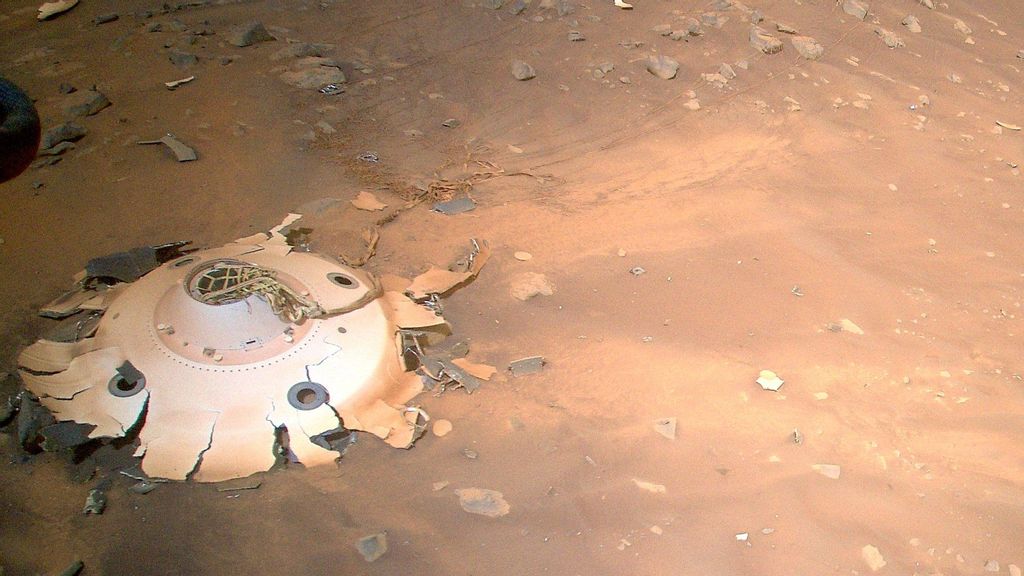 A close-up of the wreckage photographed by an unmanned helicopter on Mars. (NASA Jet Propulsion Laboratory)

An alien spaceship was seen on Mars.

On a routine mission to take aerial photographs of the Red Planet, the Mars helicopter Ingenuity captured the image.

Scientists could see what looked like a landing capsule, a supersonic parachute and other debris scattered across the Martian landscape. All the evidence pointed to the wreckage being from some sort of spacecraft.

And the evidence was right.

“Technically, this is the wreckage of a flying saucer that crashed on Mars that belongs to aliens,” Jonathan McDowell, an astronomer at the Center for Astrophysics in Cambridge, Massachusetts, tweeted.

The catch? Humans are the aliens.

The wreckage was from another Martian spacecraft — a part that detached during the landing of the Perseverance rover in February 2021.

The photos of the wreckage, while fascinating, will help scientists plan more landings on the surface of Mars.

Martian landings are “fast-paced and stressful.” according to NASA.  A vehicle entering Mars’ atmosphere spirals into the planet at nearly 12,500 mph and wrestles with high temperature and intense gravitational forces. Being able to study the remaining wreckage will allow scientists to make changes that allow for smoother landings in the future.

Perseverance was launched on July 30, 2020, traveling more than 290 million miles, with tiny 4-pound Ingenuity riding along as an unexpected companion. Ingenuity and Perseverance both landed on Mars on Feb. 18, 2021, exactly 203 days later.

Ingenuity, which went from an improbable idea to Perseverance’s spaceflight buddy, has proved that a helicopter-style rover can work. When Ingenuity made its first flight on April 19, 2021, it became the first manmade craft to fly on another planet.

However, there were concerns that Ingenuity wouldn’t be able to make it off the ground.

Mars’ atmospheric volume is much thinner than Earth’s, coming in at an atmospheric volume of less than 1 percent of our planet’s, according to the European Space Agency. The findings made it unclear if a helicopter could take off.

But take off Ingenuity did, and multiple times, too. The photos were taken on Ingenuity’s 26th flight on the Red Planet. During that flight, the helicopter traveled for 159 seconds and covered 1,181 feet of distance, according to NASA. All told, the marvel of modern engineering has traveled over 3.9 miles in nearly 40 minutes aloft, with plenty of flights still to go.