Blood Moon Rising: May Will Feature A Trio Of Major Celestial Events

Stargazers can watch a meteor shower, celebrate International Astronomy Day and bask in the glow of the blood-red moon.
By Brian Lada May 3, 2022
Facebook
Twitter
Linkedin
Email 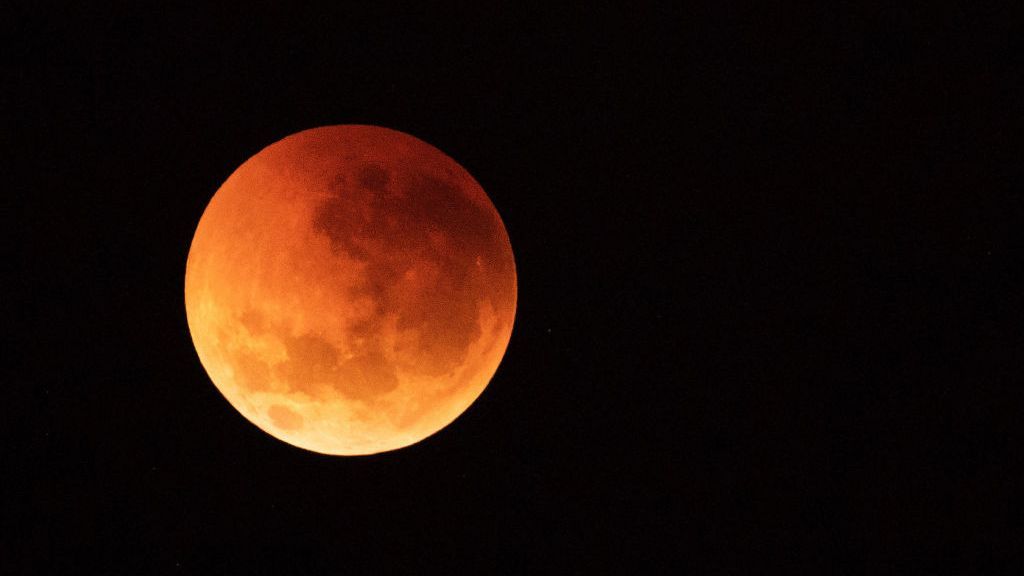 The moon glows red during a total lunar eclipse on July 28, 2018, in Sydney, Australia. This eclipse was the longest of the 21st century, lasting 1 hour and 43 minutes. Two impressive lunar eclipses will make an appearance over North America in 2022. (Cameron Spencer/Getty Images)

With the mercury rising, more people are spending time outside. Folks heading outdoors after the sun has set will have plenty of celestial events to look for in the night sky.

In addition to the upcoming events in outer space, Saturday, May 7, marks International Astronomy Day. The biannual holiday was founded to raise awareness about the night sky and takes place every year in May and October. The exact dates vary from year to year, so the sky celebrations take place when the moon is in its first quarter phase during spring and fall, according to National Today.

This year, the first International Astronomy Day falls on the first full weekend of May, creating a good opportunity for families to take some time to step outside to enjoy the star-studded sky and views of the moon. The second event will take place on Saturday, Oct. 1.

In addition, a whole host of celestial events will take place in May.

For the second time in as many weeks, meteors will streak through the night sky as the Eta Aquarid meteor shower reaches its peak during the night of Thursday, May 5, into the early hours of Friday, May 6. This comes right on the heels of the Lyrids, which peaked on Thursday, April 21, into Friday, April 22.

Observers north of the equator can expect between 10 and 30 meteors per hour on the peak night, with the best viewing window occurring between 3 a.m. and 5 a.m., local time, according to the American Meteor Society (AMS).

If cloudy weather develops on the night of the peak, eager stargazers can still catch part of the meteor shower through the weekend and into the second week of May.

“While the peak is predicted to occur on May 5 and 6, the week centered on these dates will also provide rates near 10 per hour,” the AMS said.

The Eta Aquarid meteor shower will be the second and final of the spring, with the next one not taking place until the end of July.

One of the top astronomy events of 2022 will be visible in the sky over North America in the middle of May as the Sun, Earth and Moon align to create a total lunar eclipse.

The Moon will pass through the Earth’s shadow on the night of Sunday, May 15, into Monday, May 16 — a spectacular event that does not require any special equipment to see, just cloud-free conditions.

A total lunar eclipse is sometimes referred to as a “blood moon” due to the moon changing color to dark red or rusty orange at the height of the event.

The start of the eclipse will not be visible along the West Coast, but the moon will rise in time for residents from Seattle to San Diego to see the best part of it as the moon takes on an unusual color.

The free AccuWeather app will provide cloud forecasts for various regions in the days leading up to the highly anticipated event.

A second total lunar eclipse will be visible from North America in November, providing another opportunity for everyone in its path to catch an impressive lunar event in 2022.

May will conclude with a meeting of morning planets similar to the gathering seen near the end of April, when early risers were able to see Jupiter appear extremely close to Venus before daybreak. At the end of May, Jupiter will make an even closer approach to Mars.

In reality, the planets will be extremely far apart, but from the perspective of Earth, the two will be side-by-side in the sky. This type of event is commonly called a conjunction.

The duo will appear extremely close for three mornings in a row starting on May 28; however, they will be at their closest on Sunday, May 29. The best time to see the conjunction will be about an hour before sunrise, local time.

No telescope is required to see Jupiter and Mars, but they will be so close that they will be in the same field of view when zooming in with a telescope or pair of binoculars.